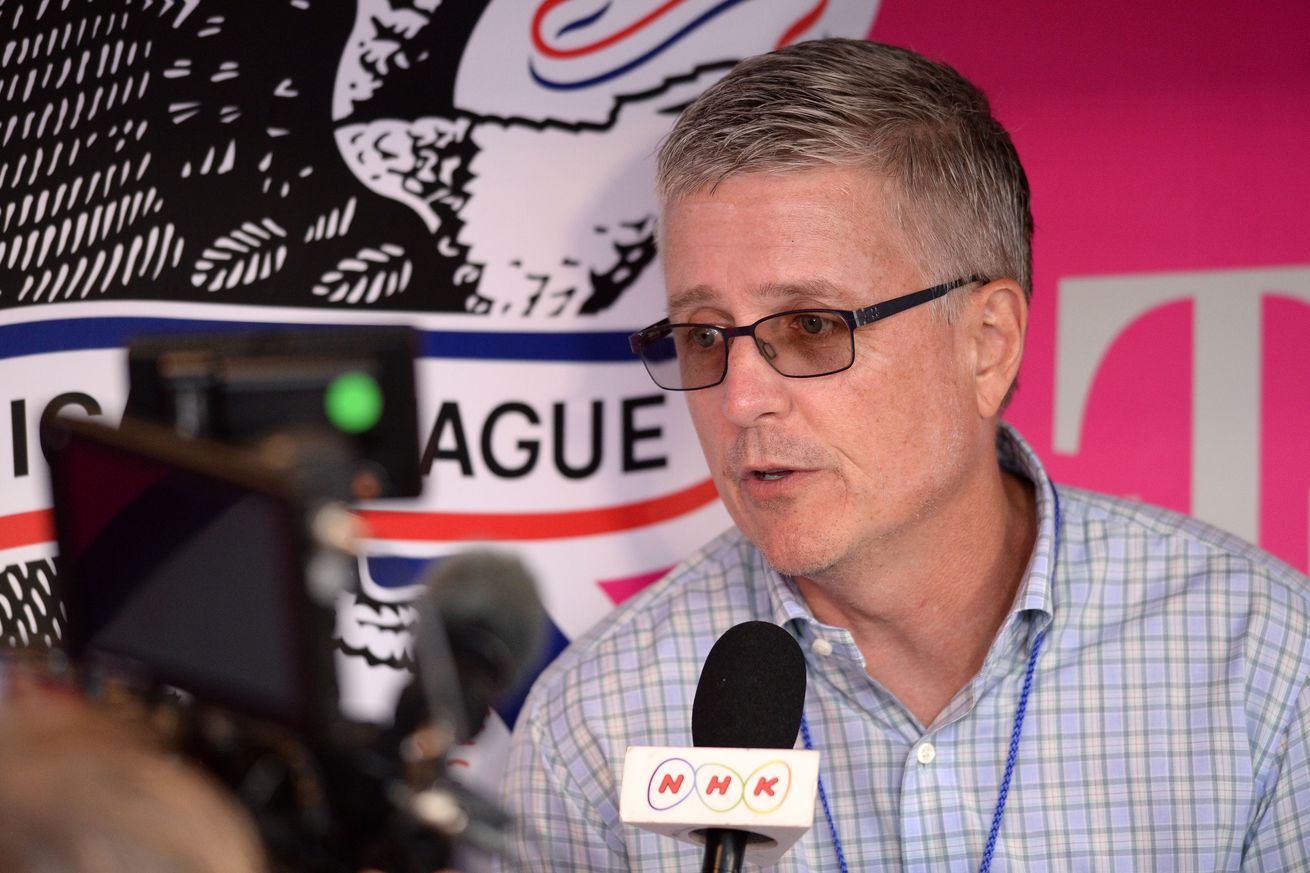 The 2019 season concluded on a rather bitter note, but the planning for next season is already underway.

Although the Astros were denied in their quest for a second World Series title in three seasons, the club accomplished plenty on the field. 107 wins, for example, is now the highest win total in a single season for the franchise. There is the possibility that the 2019 AL MVP, Cy Young, and Rookie of the Year will all come from this year’s roster in Houston. That’s just impressive, especially within the context of the club’s journey from the doldrums earlier this decade.

It will also cost a lot of money to keep the band together to start the new decade.

To be blunt, the Astros should prepare themselves to exceed the Competitive Balance Tax, or effectively known as a luxury tax, threshold of $208 million, even if the club doesn’t re-sign Gerrit Cole. As currently structured with projected totals for arbitration-eligible players from MLB Trade Rumors included, the Astros are looking at a payroll just north of $225 million for the 2020 season. (Note: Zack Greinke’s AAV does include the roughly $10.333 million in salary relief from Arizona for the next two seasons.)

Only three clubs had a player payroll exceeding $225 million by the conclusion of the 2019 season: The Red Sox at $242 million, the Cubs at $239 million, and the Yankees at $234 million. Even their own free agents won’t come cheap, so the Astros will have to become creative with payroll if they desire to stay under the tax threshold of $208 million in 2020.

But the Astros shouldn’t be worried about the luxury tax, neither should you. Well, you should worry if a club owner uses it as a reason to not spend money on players and treat it like a de facto salary cap, which they already do. The penalties for exceeding the threshold ($208M) aren’t all that severe, especially for first- or second-time payors. For billionaire owners, it ought to feel more like a drop in the bucket, or simply the cost of doing business in a lucrative industry. Not my money, though.

That said, let’s go ahead and take the Astros projected 2020 payroll in the table above as an example to illustrate how the luxury tax can impact the club in 2020.

But the Astros shouldn’t be worried about the luxury tax, neither should you. Well, you should worry if a club owner uses it as a reason to not spend money on players and treat it like a de facto salary cap, which they already do. The penalties for exceeding the threshold ($208M) aren’t all that severe, especially for first- or second-time payors. For billionaire owners, it ought to feel more like a drop in the bucket, or simply the cost of doing business in a lucrative industry. Not my money, though.

That said, let’s go ahead and take the Astros projected 2020 payroll in the table above as an example to illustrate how the luxury tax can impact the club in 2020.

Based on the current projections above, the Astros would simply owe $3,438,095 in first-time payor luxury tax. Clubs only get charged the tax on any amount over the threshold, not the entire payroll itself. For context, the Astros paid Brad Peacock $3.110 million in 2019. Even if the Astros were to exceed the threshold by, say, $25 million, the total tax would still equate to $4.6 million, with the first level of surtax included. Heck, the Astros likely profited more from their latest World Series run rather than what the luxury tax would cost them in 2020.

In short, the luxury tax is a small price to pay, at least in the early stages. Where it becomes a bit bothersome is when a team exceeds the threshold by $40 million in a given season, which will result in having its top selection in the subsequent draft dropped by ten places. And we all know that the Astros would never allow something like that to occur. They treat draft picks like I treat my first generation Charizard card, which is with the utmost care and lots of bubble wrap.

While it would be nice to see the club just say “Screw the luxury tax,” odds are not in our favor. Thankfully, it does appear Jim Crane, the Astros owner, is more open to the idea of exceeding the luxury tax threshold in 2020 than he was earlier this year (do it, Jim!).

#Astros owner Jim Crane asked if his franchise could go over the luxury tax threshold this offseason: “It’s a possibility.” (On the potential of re-signing @GerritCole45?) “We’re gonna take a run at it. We don’t know if we can get to where they what to get.” pic.twitter.com/7VSYCHdnBN

So, where does this leave the Astros as the offseason commences?

We all know general manager Jeff Luhnow is likely to trim some fat off the budget, even if Crane gives the final OK to exceed the luxury tax threshold for next season. Out of the arbitration-eligible players, Aaron Sanchez is most likely not tendered a contract as he may not be available until the later half of the 2020 season due to shoulder surgery. Jake Marisnick is a likely trade or non-tender candidate thanks to his potential raise and the fact that Myles Straw, who has a similar skill set, is waiting in the wings on a cheaper, pre-arbitration contract. Brad Peacock and Chris Devenski are two more names to watch this offseason, however, they provide key depth for a staff that will need it next year.

Josh Reddick, who is entering the final season of his four-year contract, is scheduled to earn $13 million in 2020. The Astros, who also have former top outfield prospect Kyle Tucker in waiting, would surely like to offload his salary to address other areas on the roster. Due to a downturn in offensive performance in consecutive seasons, however, it is unlikely Luhnow can find a taker to absorb all of Reddick’s salary. Also, I would advise against attaching a prospect as a sweetener in any potential swap if it is design to just avoid the luxury tax. With the roster expanding to twenty-six players next season, it would make better sense to pay more in payroll, and slightly more in luxury tax, keep Reddick as an outfield reserve, rather than trade a prospect in a deal that could haunt the franchise down the road.

In terms of their own free agents, the Astros will likely have a bit of wiggle room to work with. I’ll discuss Cole in more depth below, but the club should consider retaining a few of their own. The catcher duo of Robinson Chirinos and Martin Maldonado could both return, especially with the lack of immediate depth at the position in the upper minors outside of Garrett Stubbs. It is doubtful we’ll see Wade Miley or Hector Rondon return next season. Will Harris and Joe Smith are two names to watch, especially the latter if the former receives an offer he can’t refuse from another club. I wouldn’t even exclude a possible return for Collin McHugh, although it is unlikely. Outside of Cole, it is hard to envision any of Houston’s free agents drawing big money offers from other clubs.

Implications on the luxury tax and roster construction if Cole returns

At the end of the day, Cole remains the grand prize for the Astros, or at least he should. We all know that the Astros are a better team with Cole than without him. Continue to pair him atop of the rotation with Justin Verlander and Greinke for the next two seasons, and we’ll hopefully see a couple more deep postseason runs. The trick is the average annual value of Cole’s future contract and the number of years. As Kiley McDaniel of FanGraphs noted in the site’s annual Top 50 Free Agents article, he projects Cole to receive a seven-year, $242 million contract with an average annual value of $34.5 million. Teams and agents can get creative with that AAV figure, but the luxury tax will still be a factor, regardless of financial maneuvering.

Let’s consider the following scenario if the Astros do retain Cole’s services for 2020 and beyond under the projected contract from McDaniel above:

Cole alone, even with projected savings of $28.2 million from the proposed transactions above, would still increase the Astros 2020 payroll to $231,490,477, based on the table introduced earlier and his projected AAV. That would leave the Astros around $23.490 million over the tax threshold. The 2020 luxury tax payment, under that assumption, is roughly $4.418 million, which is still incredibly light for the usual billionaire owner in baseball. Some of the proposed transactions above are rather optimistic on my part, but it still illustrates how little the tax payment actually is.

For 2021, the luxury tax quandary would still be there for the club. It would undoubtedly put George Springer and Micahel Brantley’s future with the club in limbo as both contracts expire following the 2020 season. And don’t forget Carlos Correa is a free-agent following the 2021 season. The Astros, even if they somehow retain Cole, will still have some tough decisions to make in the long-term.

Oh, one more note: The current CBA expires following the 2021 season. Teams are planning their future with that also in mind. But Houston would gain some relief following the 2021 season with both Verlander and Greinke coming off the books that winter. That would be the ideal time to reset any tax penalties under present conditions presented by the CBA.

As we all know by now, baseball owners don’t always operate in the way that fans and observers of the game would prefer. The bottom line and profit is always a priority, and to a degree, it is understandable. After all, it isn’t our money to use and baseball is a business. At the same time, it is also an entertainment product and ought to be treated as such for the best interest of the game, players, and fans. If the Astros can ensure their best chances to compete for another World Series title for the next two seasons by exceeding the luxury tax threshold, I’m all for it, even if they don’t retain the services of Cole. After all, there are other players available that can sure make an impact on the Astros as they looked ahead to the next decade.