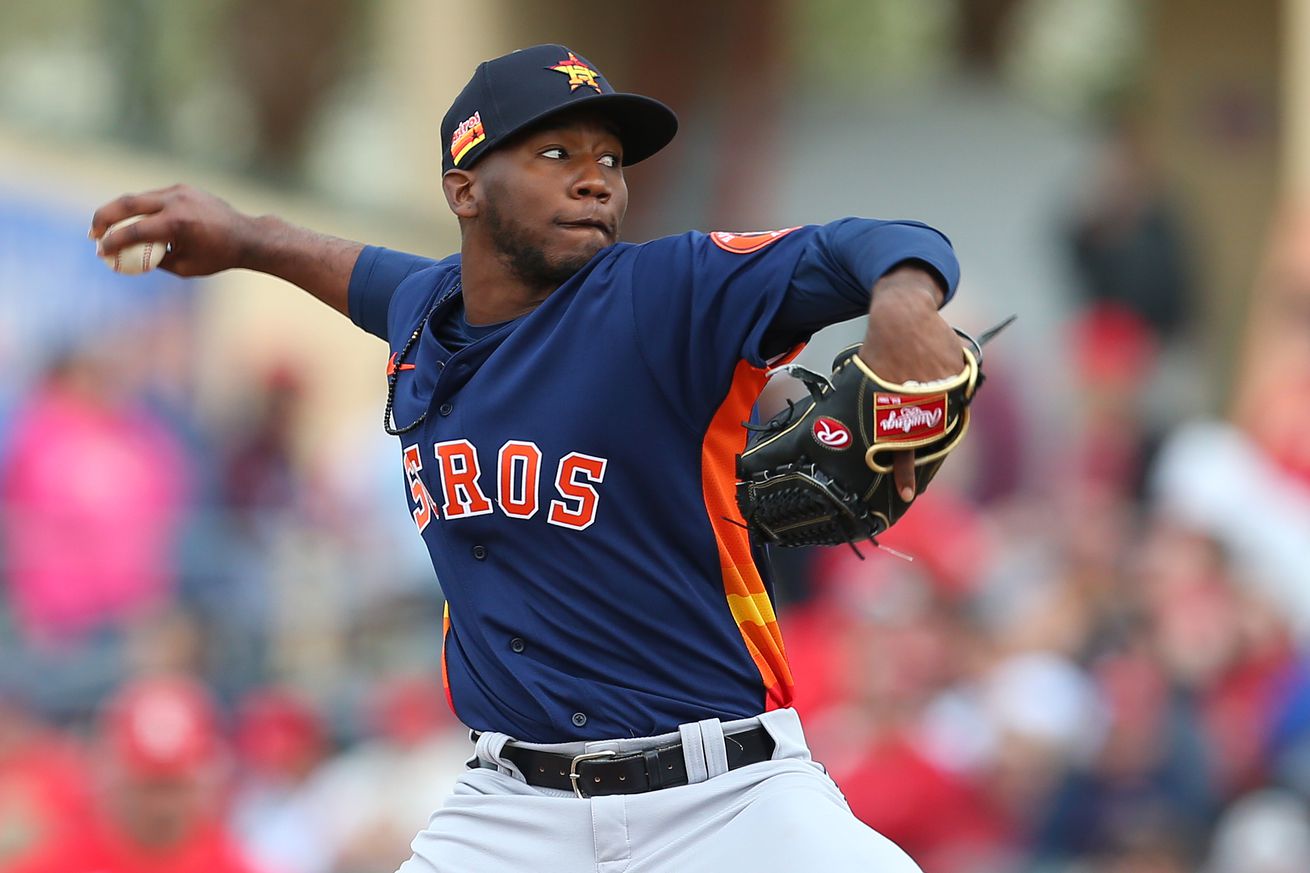 The Astros’ farm system has fallen on hard times, but even at this low point, it is stocked with potential late inning relievers.

As we sit in Coronavirus limbo, the industry consensus on the Astros farm system is that it contains just one Top 100 prospect, Forrest Whitley, and ranks among the bottom third of the league. In addition to being light at this point in time, Houston is extremely pitching heavy, with right-handed pitchers typically occupying more than half of the top 30 slots on organizational rankings. While there are a number of promising hurlers on hand who have real chances to start long term, one area where the Astros are actually better stocked than there competition is in the short relief department.

Finding useful pitchers where nobody else was looking was a strength of the Jeff Luhnow regime, and that front office’s late successes will likely go a long way in laying the foundation for a strong Astros bullpen under James Click. Below is a rundown of some of the most promising potential stoppers in the organization right now:

Bryan Abreu, RHP, 22 – With a highly athletic 6’1” build, Abreu is capable of pumping mid-90s heat consistently with elite feel to spin the ball. His mechanics aren’t as loud as some of his company on this list, but he tends to get out of sync often which leads to command wobbles. His raw stuff is of an elite level, and his ability to work high pitch counts without losing juice gives him a chance to work multiple innings regularly in the bigs.

Enoli Paredes, RHP, 24 – If you saw Paredes walking down the street you would not guess that he’s capable of uncorking upper-90s gas, but he is. The wiry, 5’11” righty generates massive torque with a busy delivery that is equal parts deceptive and scattershot. The mechanical style will preclude Paredes from building up starter’s command, but his arsenal, which includes a plus fastball, demonic curveball that some evaluators rate as double plus, a legitimate changeup thrown with conviction, and even a solid slider that he’ll trot out at times. Walks are always going to be an issue, but good luck hitting him.

Jojanse Torres, RHP, 24 – A big mover in 2019, Torres impressed at both A-ball levels and the Arizona Fall League to position himself for a Double-A assignment before pandemic struck. Unlike Abreu and Paredes, Torres has a narrower, traditional reliever’s arsenal focusing on two offerings. Fortunately for him, both of those pitches, his fastball and slider, have swing and miss potential at the highest level. Torres’ long limbed 6’1” frame and loose athleticism generate fastball velocity that is regular around 97 and touches triple digits often, and he backs it up with a power slider that misses plenty of bats. He could be an exciting bullpen contributor as soon as 2021.

Shawn Dubin, RHP, 24 – Yet another 24 year old righty who can be described as “wiry,” Dubin stands 6’1” and is listed at a wispy 154 lbs. Despite the slight build, Dubin’s elite arm speed generates mid-90s heat that he pairs with a devastating, high spin slider. He struck out well over 30% of batters he faced in 2019 to explode onto the radar after joining the organization as an 18th rounder in the 2018 draft. Some are high on Dubin’s curveball and changeup as well and think with some tweaks and added weight he could give it a run as a starter, but the likely outcome is that he’s a late inning strikeout artist given his advanced age and questionable build.

Carlos Sanabria, RHP, 23 – An athletic power hurler, Sanabria’s fastball is consistently hard in the mid-90s and he shows a wide array of secondary offerings that all flash average or so. To this point, none of the offspeed stuff has emerged to the point that many had hoped, and his location has remained pretty stagnant, giving him more of a mid-relief look. If he narrows his arsenal, perhaps he could improve his bat missing ability with his secondary stuff and improve upon that projection to get back into setup territory.

Cionel Perez, LHP, 23 – A celebrated free agent signing out of Cuba, Perez showed plenty of promise early in his career but has been derailed by injury in recent seasons. Despite a smaller frame, Perez sits solidly in the low to mid 90s from the left side with life, and has a hard biting slider to back it up. At times his change-up also appeared above average and he had a mid-rotation starter look, but he hasn’t shown it as frequently of late. The window for starting is starting to close, but as one of the most talented lefties in the organization, he could carve out a high-leverage role in the pen in the future.

Luis Garcia, RHP, 23 – Unlike many of the other arms on this list, Garcia has a thick, traditionally strong build and has the expected arm strength to match. His power-oriented approach to pitching limits him to below average location, but he throws hard with great feel to spin it on a plus slider. He struck out roughly 35% of batters faced across two levels in 2019, and so long as the walk rates stay reasonable, he has a chance to be a late inning man down the line.

Jose Rivera, RHP, 23 – An Abreu-like athlete on the mound, Rivera will likely receive a little more leash as a starter before shifting to relief full time, but that remains the most likely outcome for him. Rivera sits in the mid 90s touching higher, and has projection remaining in his frame which leads some to believe he’d sit in the upper 90s as a single inning man. His breaking ball is also very strong and capable of drawing whiffs, and while his location to date hasn’t been stellar his mechanics aren’t too busy and it has a chance to be better than many more relief-oriented prospects.