In the comment section on my recent 2021-22 MLB Free Agent Power Rankings, there was a lot of debate about the merits of shortstops Carlos Correa and Trevor Story, who seem to clearly fall behind Corey Seager in the upcoming free agent class.  Which player will have greater earning power in free agency? 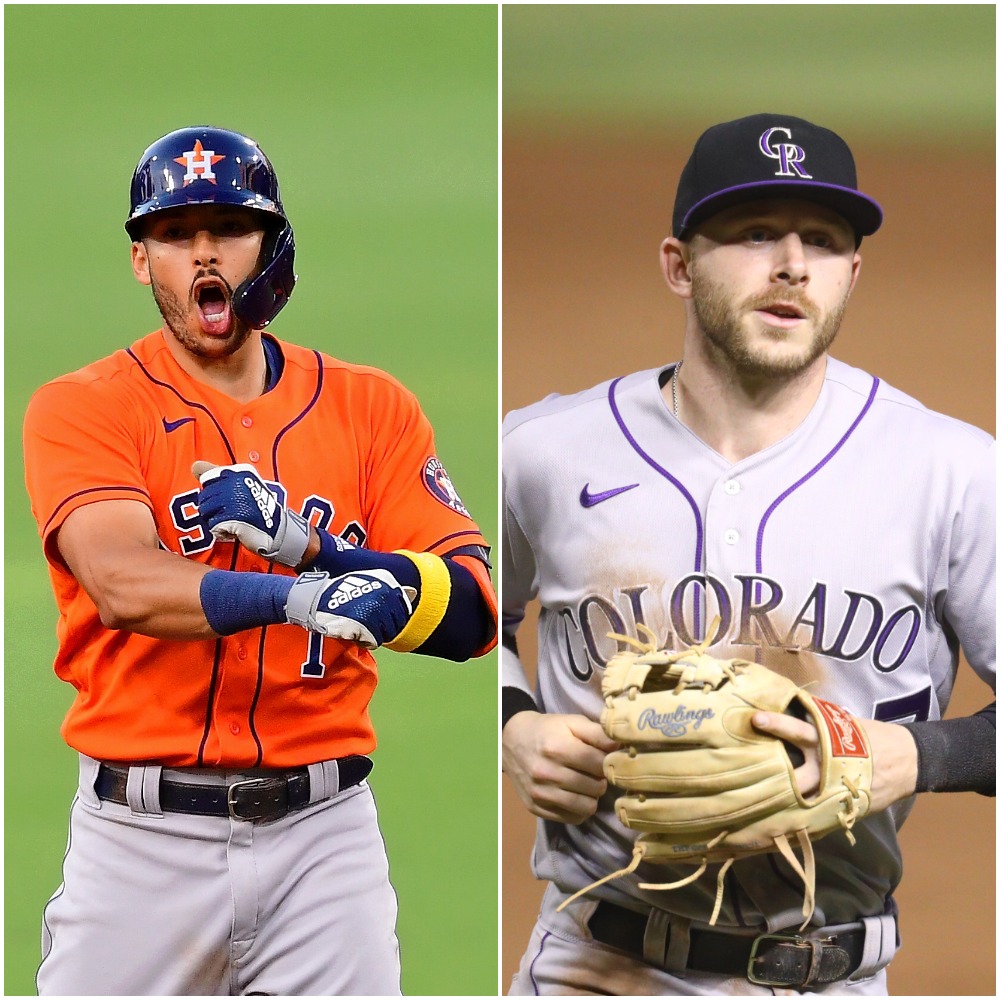 Some points of comparison:

Age is a crucial factor in free agent contract length, as teams want to avoid as many decline years as possible.  Capturing a player’s age 27 season in free agency is a rare thing.  In the cases of Bryce Harper (13 years), Manny Machado (10 years), and Jason Heyward (eight years), teams were actually able to capture age 26.  There are not any other recent cases of free agent deals that included age 26 or 27.

Machado signed for ten years and $300MM, while the Mets recently extended Francisco Lindor for ten years and $341MM, albeit with deferred money.  The players were paid through age 35 and 37, respectively.  A contract running through age 37, as Lindor’s does, is pretty rare.  I think teams will be looking to commit to Correa and Story through age 35 or 36, at most.  Paying through age 35 would mean a nine-year deal for Correa, though that might be a long shot given his inconsistency and injury history.  It’d mean a seven-year deal for Story.  Those terms would only be available if the players are considered highly desirable after strong 2021 seasons.

Story may follow the path of Matt Holliday.  From 2005-07, Holliday posted an even more extreme 166 at home and 108 on the road.  He was not a 108 wRC+ hitter after leaving Coors, however, putting up an excellent 145 mark from 2008-13, mostly for the Cardinals.  Holliday was able to spend all of his 2009 contract year away from Coors, posting a 141 wRC+ for the A’s and Cardinals that likely helped him land the largest contract of the 2009-10 offseason.  DJ LeMahieu is another example of a former Rockie who continued to hit well after posting extreme splits.

In the likely event Story is traded this summer, he’ll have a chance to demonstrate his standard 120 wRC+ production in a more neutral environment for a few months.  That’s more likely than a Correa trade, and being free of a qualifying offer would be an advantage for Story.

As for Correa, what about the sign-stealing scandal?  According to MLB’s report, the bulk of the Astros’ sign-stealing efforts were in 2017, in which Correa put up a career-best 152 wRC+.  He was excellent both at home and on the road, though the scheme is only thought to have occurred at the Astros’ home park.  MLB’s report suggested the Astros did not utilize trash-can banging in 2018, when Correa dropped down to 101.  That 101 mark may be explained by a back injury, which I’ll get into later.  The Astros also weren’t thought to be cheating in 2019, but Correa bounced back to a 143 mark.

Astros fan Tony Adams analyzed home data for the Astros from 2017, and found 140 total trash can bangs for George Springer and 97 for Correa.  If potential free agent suitors consider Springer and Correa equally complicit in the sign-stealing, it would bode well for Correa, since the scandal didn’t seem to have much effect on Springer’s market.  Ultimately, like Springer, Correa just needs to go out and have a big contract year if he wants to get paid.  There’s a solid argument that in a neutral ballpark, he’s a better hitter than Story.

By measure of UZR/150, Story is at 3.9 since 2018, while Correa sits at -3.5.  Story also leads in Defensive Runs Saved (DRS), though that’s a cumulative stat and he played an additional 1,042 innings in the field – 47% more than Correa did.  Outs Above Average, which is part of Statcast, is more sophisticated than UZR or DRS, but doesn’t necessarily tell a clear story.  Here’s each player’s OAA by year:

It would appear that Story’s defense slipped to a below-average level in only one season, 2018, on which OAA and UZR/150 agree.  There’s no clear injury in 2018 to explain the lapse, though he miss a few late September games with elbow soreness.  Story was able to improve his range and reduce his errors in 2019, and seems to have settled in as an above-average defender.

We’ll talk about durability in the next section, but with Correa we have a player who has tallied 1,000 innings in the field exactly once, in his 2016 sophomore season.  UZR suggested he was a bit below average that year, while OAA had him as the game’s worst defensive shortstop.

2018 is particularly odd for Correa, where OAA shows him as the game’s fourth-best defensive shortstop while UZR/150 has him as the fourth-worst.  That was a year in which Correa avoided the IL until late June, at which point he missed over a month due to a back injury.  He acknowledged that the injury played a role in his plummeting offense, and his OAA was lower after the injury.  MLB.com’s Mike Petriello suggested to me that the Astros’ frequent shifting, and UZR’s lack of accounting for that, might account for the difference between the two stats.

Correa suffered another major injury toward the end of May 2019 – a cracked rib that cost him two months – as well as more back pain in late August of that year.  Nonetheless, his defense doesn’t seem to have suffered.

Both Story and Correa have been above average defenders since 2019, ranking fourth and ninth respectively in OAA.  Story is carried largely by his 2019 season, for which he was voted a Gold Glove finalist for the first time.  Though he has dropped off so far this year, Story has often ranked among the top 40 in the game in terms of sprint speed, which is a factor in his defense.  I think it’s safe to say that Story is the superior defender.  It’s worth noting that Correa has already expressed a willingness to move to third base if needed, while the topic hasn’t really been broached for Story.

Story was drafted 45th overall by the Rockies out of high school in 2011.  As a minor leaguer in 2014, he missed roughly a month due to hairline fracture on his left pinky finger.  The Rockies traded longtime shortstop Troy Tulowitzki in July 2015, taking on Jose Reyes in the process.  In 2016, Reyes was suspended through May to begin the year under the league’s domestic violence policy, opening the door for Story to make the team out of camp.  After becoming the Rockies’ starter in 2016, Story’s season ended on July 30th due to a torn UCL in his left thumb that would require surgery.  It was still good for a fourth-place Rookie of the Year finish.

A new injury popped up in May 2017, as Story strained his left shoulder and missed the minimum two weeks.  In late September 2018, Story exited a game with right elbow soreness, but he missed only five games.  In June of 2019, Story injured his right thumb after a headfirst slide, with the resulting IL stint costing him 11 games.

Correa was drafted first overall by the Astros out of high school in 2012.  He dealt with only minor injuries in the minor leagues until June 2014, when he suffered a fractured right fibula sliding into third base and had to undergo surgery.  By January 2015, his ankle was back to 100%.

Correa opened the 2015 season at Double-A, a defensible choice since he’d yet to play at that level.  He reached Triple-A by May and went on to make his big league debut on June 8th.  The timing worked out well for the Astros to receive part of a seventh year of control of Correa and also avoid Super Two status, but his starting the year in the minors was justified.  Correa played 99 dynamic regular season games in 2016, avoiding injury and winning the Rookie of the Year award.

2016, just Correa’s age 21 season, was perhaps the best of his career.  He missed three games in June with an ankle sprain and another four with shoulder inflammation, but avoided the IL.  Correa would play 153 games in the regular season that year, the only time he’s exceeded 110 Major League games in a season.

Correa’s injury history is significant, but also limited to the three-year period of 2017-19.  On July 17th, 2017, according to MLB.com’s Brian McTaggart, “Correa left Monday’s 9-7 loss to the Mariners in the fourth inning after injuring the thumb on a swing, the same thumb he originally hurt sliding head-first into home July 4 in Atlanta.”  The torn thumb ligament required surgery and cost him more than six weeks.  He returned successfully in September of that year.

Correa’s next IL stint was in June of 2018 due to a back injury.  Like the thumb the prior year, this injury cost him about a month and a half.  Though he returned in mid-August, the issue lingered and affected his performance for the rest of the season.  From 2015-19, 2018 is Correa’s only season with a wRC+ below 123, and it’s easy to attribute his overall 101 mark that year to his back injury.  Correa had a 128 wRC+ before the injury, and just a 45 mark thereafter.

Correa’s back healed up and he started yoga in the 2018-19 offseason, but a cracked rib suffered in late May 2019 cost him a full two months.  Oddly, Correa said the rib was cracked by what must have been a particularly aggressive massage.  After he’d been back for about a month, he went on the IL again due to a back injury.  Since then, Correa has avoided the IL, playing in 58 of 60 games in 2020.

Both Story and Correa have been starters since 2016.  Story has played in 619 games – 19% more than Correa’s 520.  Is Correa, who has yet to reach his 27th birthday, simply an injury-prone player?  Or might he settle in at 150 games per year if he avoids headfirst slides and rough massages?  If I was looking at signing him, it’s his back that I’d be concerned about, as it cost him roughly two and a half months during the 2018-19 seasons.  150 games this year would go a long way.

If you buy those projections, Correa will be the better per-game player moving forward, likely due to the age difference.  Aside from the durability question, that is what MLB teams must determine when offering these players contracts: who will be better over the next seven years or so?

With that lengthy comparison of Carlos Correa and Trevor Story, I turn it over to you.