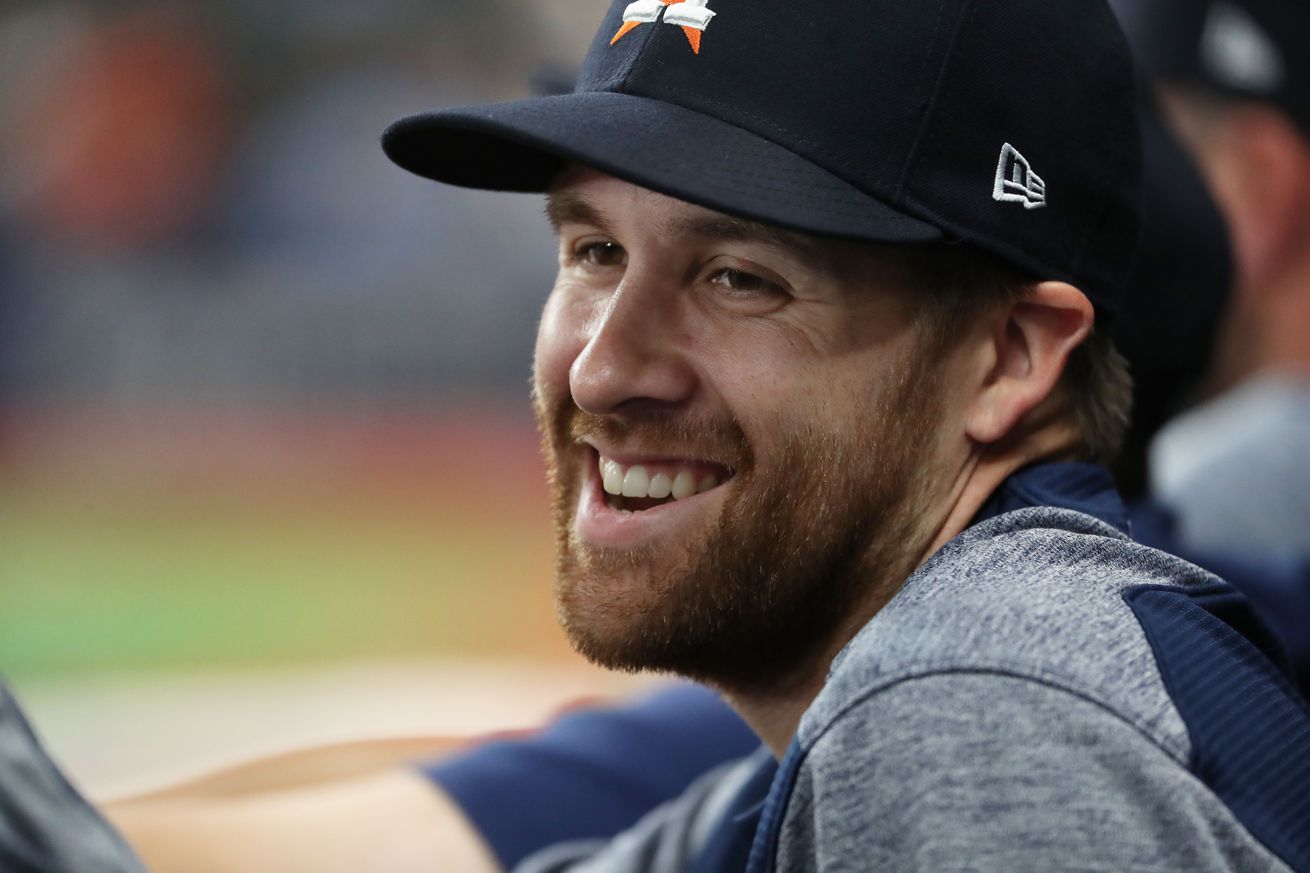 Thank you, Collin McHugh (and your wife too.)

When Astros righty Collin McHugh was first claimed off waivers from the Colorado Rockies in 2014, I immediately wrote him off. I thought he would just play a few games then get released. It wasn’t a bad prediction at the time. An 18th round draft pick, he had posted an underwhelming ERA of 8.94 in his first two years in the majors.

April rolled around. The Astros started the season with a rotation that consisted of Scott Feldman, Jared Cosart, Brett Oberholtzer, Lucas Harrell and Dallas Keuchel. But not McHugh.

On April 22nd, McHugh started a game against the Seattle Mariners. He allowed 3 hits in 6 2⁄3 innings of work. No big deal, I thought, just one win. Let’s see if he proves me wrong.

Five days later, he allowed just 2 hits over 8 2/3 innings. I started to pay a bit more attention. He struggled a bit the next few games but turned it around, and I was hooked. Though the team wasn’t really striking fear in the hearts of anyone, between McHugh, Keuchel and Feldman, the Astros actually had the start of a rotation.

Later that season, I found myself discussing the Astros with a Mariners fan.

“The Astros are terrible again,” I told him.

“Yeah,” he agreed, “but they’re getting better. You have one guy that always seems to play well against us every single time.”

“That guy pisses me off,” he replied.

Finally, an opposing fan who didn’t like an Astro, because he was good against them. It was like heaven opened up and the angels were singing. After three years of hearing how bad the Astros were, I finally felt a bit of hope.

My one sided bro-mance with McHugh further blossomed on September 9th, 2014, my 19th birthday. He allowed 1 run against the Mariners in 8 innings of work. The win on my birthday meant a lot to me. Not that the Astros knew when my birthday was, but it just felt like a birthday gift to me.

At the time, my friends and I were out celebrating my birthday. I mentioned the score to my friend Connor, who slid his hand across his hair and simply said, “I hate that guy.” If Connor loved or hated a guy in sports, it meant something.

In 2015, McHugh won 19 games, helped return the Astros to the postseason, and even earned a few Cy Young award downvotes. The rebuild was over. The Astros were now contending, thanks to his play.

But his on-field performance wasn’t the only reason I was a fan. He was a blogger. He wrote about everything from going gluten-free to what he would tell himself as a minor leaguer. The blog humanized him. We weren’t just talking about a guy who plays catch for a living. I was reading stuff from a guy who felt like we feel, but happened to play baseball.

Collin was a student of the game. He read everything the front office gave him. He loved that stuff just like me.

He became the player I looked up to most. More than George Springer, whose story of overcoming a stutter gets me every time. More than Jose Altuve, who was told to go home when he first tried out for the team because he was too small. More than anyone else, Collin was my new favorite Astro.

The story doesn’t end there. Last year, I stumbled onto Ashley McHugh’s twitter account, and it quickly became one of my favorite follows. She tweeted about unique aspects of life as the wife of a baseball player.

I’ve got 99 problems but 14 of them are individual state tax returns!?

She tweeted about Will Harris after he consistently bailed the team out when opposing runners were in scoring position.

When Tony Kemp was traded to the Cubs, she mourned with us.

And of course she’s as grateful to the Astros, the city of Houston, and the fans as Collin is.

what a ride. it’s not lost on me how lucky we are to call this team ours. it’s not lost on me that this won’t last forever. not every game or season has been perfect, but we’ve been proud to be astros for six of them. thanks for letting us hang, houston. pic.twitter.com/DbkG19gPrI

So if this is the end of your tenure with the Astros, Collin, let me tell you this. Thank you for turning around my fandom. Thank you for helping the Astros get back to the playoffs. Thank you for helping the team win the World Series. For the longest time, I saw athletes not as normal humans, but as these people with extraordinary abilities that were better than the average Joe. You helped to humanize athletes for me. You’re a regular person who happens to play baseball. So Collin, my fellow resident of the Heights, if you never suit up for the Astros again, then I really enjoyed the run you had with us.

Just do me one favor. Don’t sign with the Mariners, please.