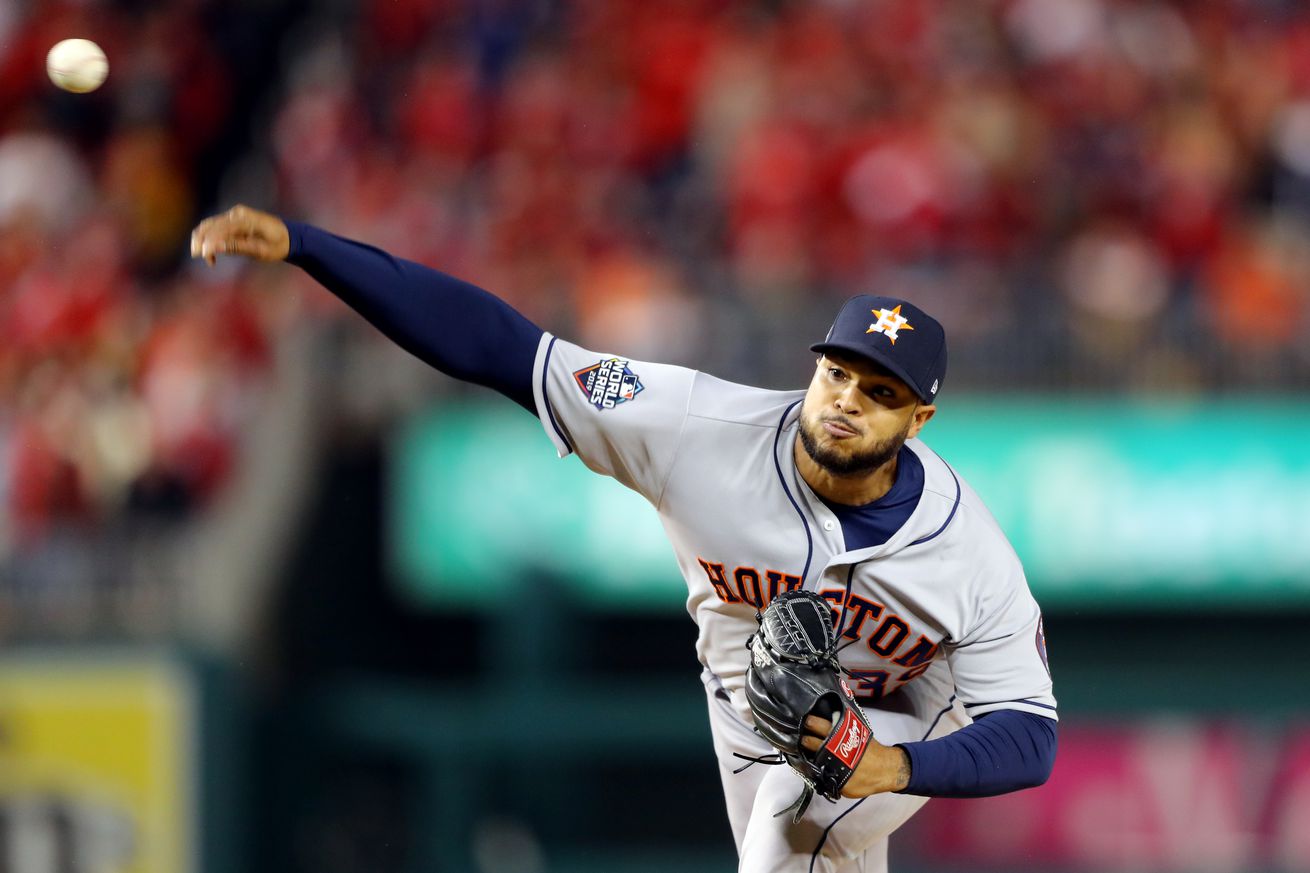 The Astros are starting to face the cold reality of free agency with this current core, but there are players to watch that’ll help mitigate the potential losses.

While the Astros find themselves embroiled in another scandal, I decided to find something not so controversial to write about. Much easier said than done when considering all of the negativity currently hovering around the club.

Thankfully, there are plenty of quality players on this roster to still write about, and my offseason dive starts with a pitcher with an interesting backstory in the minors. His name is Josh James, and mercy, can he throw some heat. And, just maybe, I should invest in CPAP therapy. I won’t throw anywhere near 100 MPH in my lifetime, but I have a feeling my quality of life would improve. Hey, that’s a win for me.

In the above clip, in a game against the Brewers on September 2nd of this year, James was handed the ball with a one-run lead in the bottom of the tenth. A tense situation, for sure. The game didn’t really have major implications for the Astros outside of their quest for home field advantage (um, yeah, that didn’t work out), but the Brewers were in the midst of a tight race for the top spot in NL Central with the Cardinals and Cubs. But, still, it is nice to see your ball club win a close game on the road against a postseason contender. Something about a win just boosts your overall confidence. And James ended this one in a convincing fashion as he got Hernan Perez to strikeout on a 99 MPH four-seam fastball in the outer portion of the strike zone.

That particular appearance against the Brewers sort of encapsulates James’ journey in 2019. For example, the right-hander didn’t exactly help his cause as he walked the leadoff hitter, David Freitas. Don’t you hate it when that happens? I know I do. James would then proceed to strike out Trent Grisham (yay!) before walking Yasmani Grandal (ugh!) to put two runners on base. Oh, yeah, Christian Yelich, the 2018 NL MVP, was his next opponent. Not exactly an optimal situation in a one-run game during the bottom of the tenth inning on the road. Based on the play log over at FanGraphs for this game, Milwaukee’s win expectancy jumped from 20.8 to 33.3 percent when Grandal was walked. Those two walks could’ve certainly undone the Astros that day. However, Yelich struck out looking on a slider a bit above the zone, which might be an instance where catcher Martin Maldonado’s framing was ultimately the determining factor.

We all know the end result as James struck out the side to end this affair. He was borderline impressive at times, but also maddening in the process in this appearance. The same thought applies to his entire body of work in 2019. His numbers reflect this roller coaster of stress as he finished the year with a 4.70 ERA along with an impressive 37.6 percent strikeout rate. That 37.6 percent strikeout rate, for reference, was the ninth-highest mark out of all qualified relievers in baseball this year. However, his 13.3 percent walk rate was also the 16th-highest in baseball, which can truly haunt a pitcher.

The question with James since his major league debut in 2018 has never been about his talent or velocity. Rather, it has been centered about his consistency on the mound. In fact, James was third among all relievers this season when he threw a four-seam fastball that resulted in a walk. All in all, this occurred on 2.3 percent of his pitches thrown. Only Tanner Rainey (3.6 percent) and Tayron Guerrero (3.2 percent) posted higher his rates than James in this regard.

If James continues to refine his control, he would be an incredibly valuable arm for the Astros in 2020. It will also be interesting to see how Houston proceeds in free agency, especially with Will Harris, Joe Smith, Collin McHugh, and Hector Rondon all on the open market this offseason. How the front office addresses the bullpen may shed some light on exactly how they view James and his potential. I will note that it would be a surprise to see James back in the rotation next year, and, honestly, it feels like his long-term occupation could be a reliever. But 2020 could be the year he puts it all together and I personally can’t wait to find out.