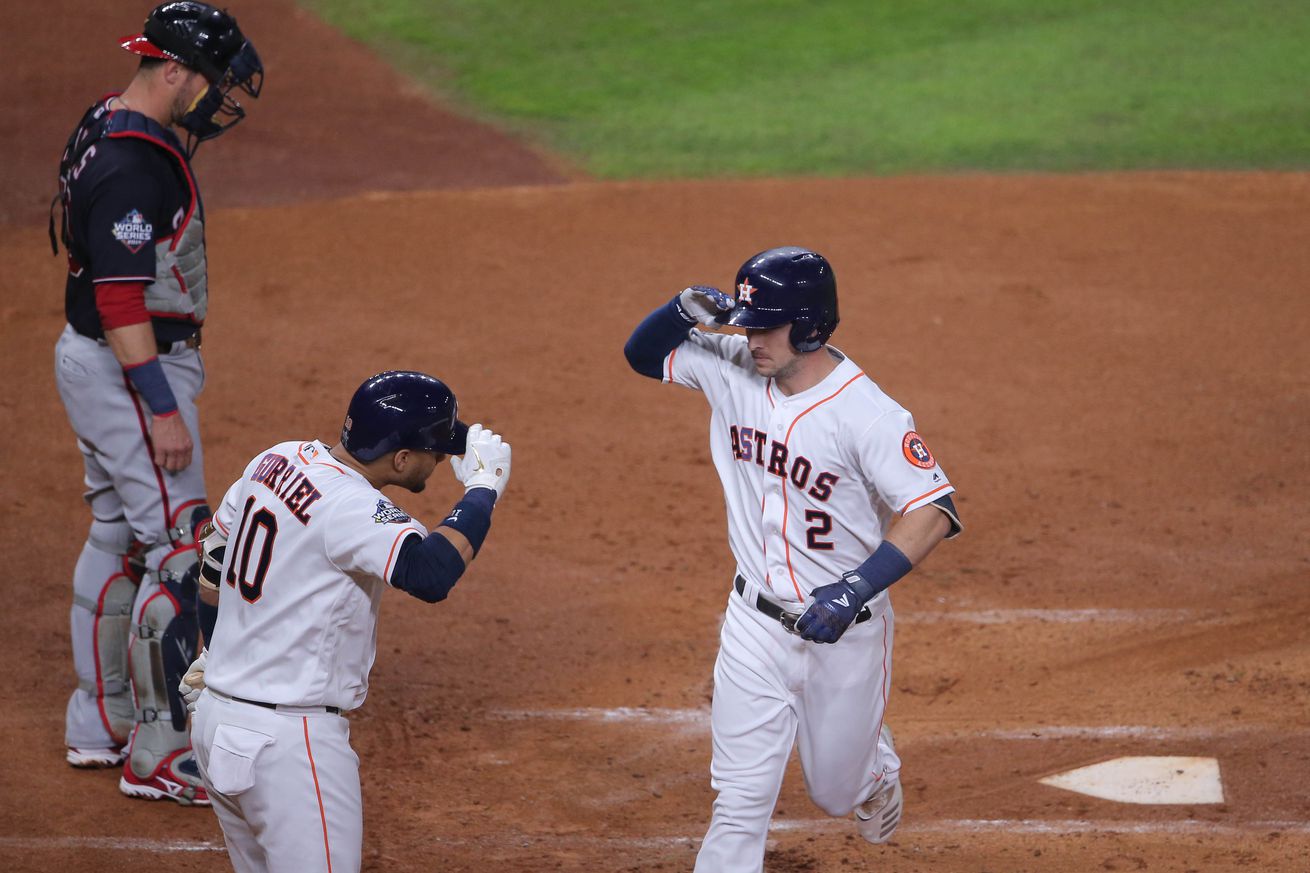 rStephen Strasburg continued his dominant 2019 postseason, returning the Astros’s lineup to its low-scoring ways from the start of the series, and a trio of Washington home runs forced the 2019 World Series into a decisive Game 7.

At first, things looked to be going the Astros way. The Nationals cobbled together a run in the first on an infield single by Trea Turner that had to be reviewed, a sacrifice bunt, and an Anthony Rendon seeing-eye single.

But the Astros immediately struck back even stronger: George Springer lined the first pitch he saw off the left field wall, moved up on a wild pitch, then scored on a Jose Altuve sac fly. And right after that, Alex Bregman launched a solo shot into the Crawford Boxes to give the Astros an early lead.

Unfortunately, that marked the entirety of the Astros’ offense on the night. Yuli Gurriel and Yordan Álvarez worked two-out walks in the fourth, just Strasburg’s third and fourth free passes of the offseason. But both were stranded.

The next inning, Josh Reddick hit a one-out line drive single, which George Springer followed up with a line drive double of his own. But Altuve and Brantley proved unable to bring either of them in.

And again, the following inning, Alex Bregman legged out an infield single to Trea Turner, a perfect reversal of the play that started the game. But with three straight ground outs, Houston again proved unable to do anything with the opportunity. That single would be the Astros’ final offensive burst of the night against Stephen Strasburg, as he closed out the night with a final line of 8.1 innings, five hits allowed, two walks, and seven strikeouts.

The Nationals, in comparison, didn’t waste their chances. Even as Justin Verlander worked through the first few innings, the Nats did a great job of making him waste pitches, fouling pitches off, and working walks. Finally, in the top of the fifth, they returned fire. Adam Eaton hit a one-out solo shot to even the score, then Juan Soto hit two-out solo homer to retake the lead. That would be the end of things for Verlander, who finished the night with 3 runs in 5.0 innings, five hits allowed, three walks, and only three strikeouts.

Even worse for the Astros, that was easily their second-best pitching performance of the night, as things continued to spiral out of control. The Astros almost escaped trouble in the seventh on a controversial call, after a Yan Gomes leadoff single. Trea Turner hit a weak ground ball, which Brad Peacock fielded and threw to first. But the ball hit Turner as he ran up the line, taking Yuli’s glove with him.

The umpire decided that constituted interference, though, calling him out and sending Gomes back to first. There was a long delay as the rules were consulted, and Washington manager Dave Martinez even got himself tossed (the last time that happened to a manager in the World Series was 1992, to, naturally, Bobby Cox).

Trea Turner was called out on this play.

Eaton popped out for the second out of the inning, but Houston native and Rice alum Anthony Rendon hit one of his own into the Crawford Boxes to make it 5-2 Washington. He would strike again in the ninth with a two-out, two RBI double to move the score to 7-2. Carlos Correa would hit a two-out double of his own in the bottom half of the inning, which just missed going out, but that was all the Astros could muster.

The win moves Stephen Strasburg to 5-0 on the offseason, making him just the second starting pitcher in history with five wins in a single postseason (the first was Randy Johnson, who went 5-1 in 2001). Meanwhile, Verlander drops to 1-4 in this postseason, and 0-6 in the World Series. And this marks the first time in any American major league sport that the first six games of a playoff series have been won by the away team.

Tomorrow now means the Astros will be playing in a World Series Game 7 for the second time in three years, this time at home. Hopefully, they’ll be able to bounce back like they did after their Game 6 loss in 2017. Neither team has officially announced a starting pitcher yet, but the Astros will likely be turning to midseason acquisition Zack Greinke. The Nationals, meanwhile, can turn to either Aníbal Sánchez or Max Scherzer. Tune in tomorrow at 7:08 PM Central Time for the conclusion of the 2019 season.