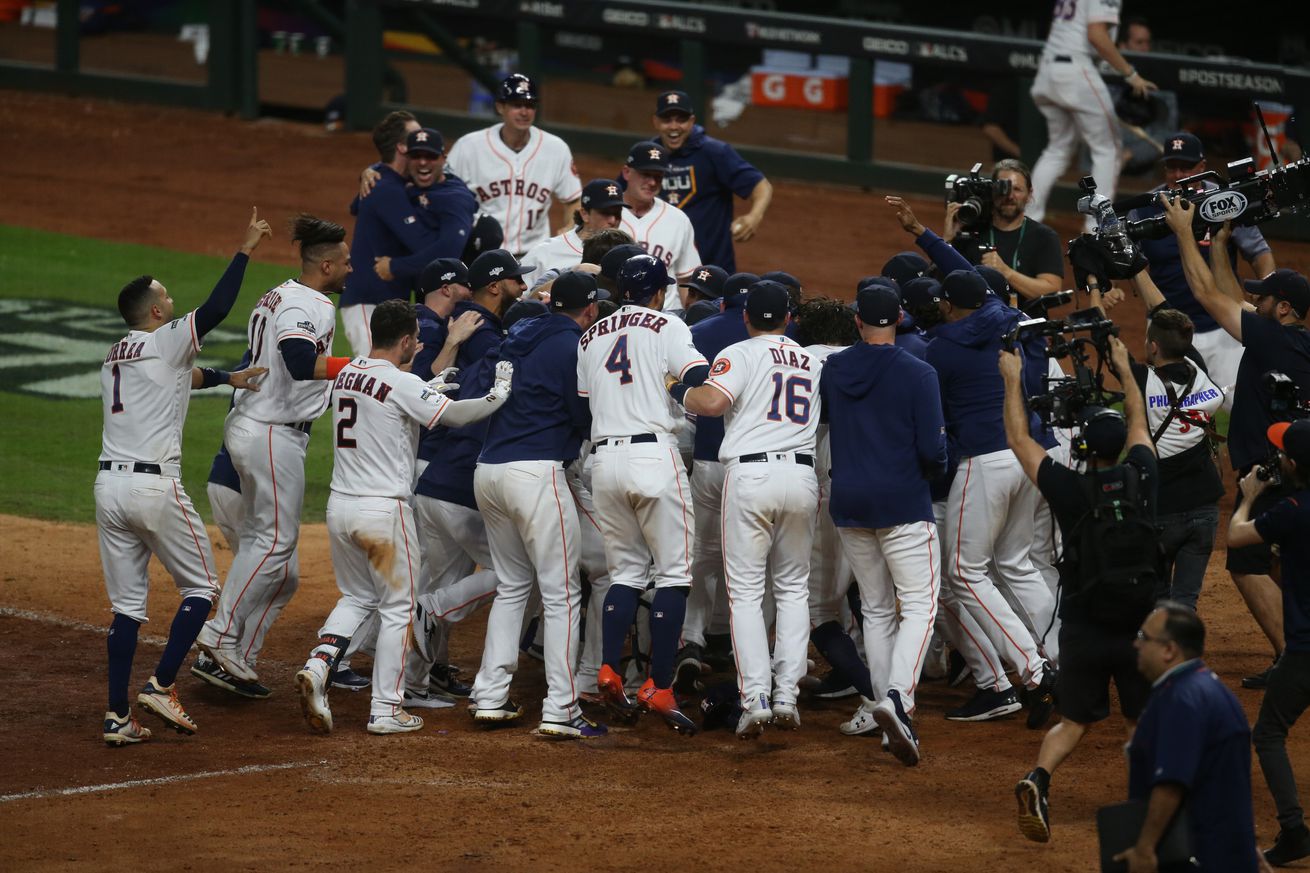 Things might not go as well as in 2019, but that doesn’t mean the Astros’ run is over

It’s hard to feel this way right now, less than a week after losing Game 7 of the World Series, but the 2019 season was a success for the Astros. Only one team out of thirty can win it all each year; you can’t go into the season thinking of each season as “World Series or Bust”, or you’ll drive yourself crazy. Houston still got further than 28 other teams in the league, claimed only their third pennant ever, and still won more games than ever before in their history.

Even among the small-but-successful group of “teams with three straight 100-win seasons”, the 2017-2019 Astros still stand out as a stunning success, given that the last two teams to pull that feat off combined for one pennant and no World Series in their six seasons. Maybe if Houston hadn’t won the 2017 title, I’d feel worse about this year, or maybe if this year’s loss had come to a different team, a less-likeable one that wasn’t in a drought reminiscent of pre-2017 Houston’s. Who knows. But five or ten years from now, it will be easy to look back at 2019 as the team’s second-best year ever and focus on things like Justin Verlander’s no-hitter, or Jose Altuve’s ALCS walk-off, or the potential sweep of MVP, Cy Young, and Rookie of the Year next week, or any number of other highlights.

Of course, it probably also helps that I don’t think that 2019 represents any sort of “end” to their run. I’ve seen some people saying that things will be downhill from here, which may explain some of the exasperation. That seems way too pessimistic to me, though, so I just wanted to pull that idea apart a bit and examine it.

Let’s just start with the obvious: the Astros will probably not win 107 games again. Only sixteen teams ever have done that; that’s they type of thing you only see about once a decade (the 2010s are the first decade with multiple 107+-win teams since the 1970s), because it takes a lot of things going right. Just like the World Series, though, you can’t define success that way, because that’s not the type of thing you should just expect to see every year, let alone expect to see from one specific team.

But, the flip side of that is that it is extremely plausible to win fewer games in a season and still have things work out! If there are only sixteen 107+-win teams in history, then obviously, most seasons, the best team in the Majors still wins fewer games than this year’s Astros. And that’s not even getting into winning the division versus having to claim the best record in the league.

Which brings us to the randomness of “success” in the Wild Card era. Who wins it all in October is famously random; just being able to make it to the postseason means you aren’t totally out of the running, even if you weren’t strictly “the best”. Winning your division is key because it let you skip the one-game Wild Card play-in, but that’s really the single biggest difference among playoff teams’ chances. It doesn’t really matter if it’s your franchise’s “best” team strictly speaking, you just need to win a playoff spot and then get hot at the right time.

Just ask the Nationals, for instance who will sure remember this year a lot more fondly than 2012, when they led the NL with 98 wins, or 2014 or 2016 or 2017, all of which saw them win more games than they did in 2019. In fact, a lot of people wrote them off at the start of this year as having clearly lost a step and missed their window, with the team aging and Bryce Harper leaving. In the end, that didn’t really matter a ton; they won enough to make it to October, then ran with it from there.

So, will the Astros be in contention for a playoff spot next year? On the one hand, it feels very premature to call it this early, given that we have to go through an entire offseason and all the roster shakeups that will bring. The Astros will likely be losing their best pitcher in Gerrit Cole, which isn’t great. But there are also so many positives to their situation that it doesn’t make a lot of sense to me to take the pessimistic route before the offseason has even started.

They still have most of the rest of their core returning, between Altuve, Verlander, George Springer, Alex Bregman, Yordan Álvarez, Carlos Correa, Zack Greinke, and so on, as well as young players like Kyle Tucker, Abraham Toro, Myles Straw, and Forest Whitley to try out, and Lance McCullers, Jr. returning from injury. Few teams have that much talent to start from. And while there are holes to fill, every single team in the majors has holes in their roster right now; the Astros aren’t unique in that regard. Given how good they were in 2019, they’re still starting ahead of everyone else.

Even more specifically, they look to be in a lot better shape than the rest of their AL West rivals, and that’s the biggest factor to account for right now. The Rangers, Angels, and Mariners all finished between 29 and 39 games behind Houston this season, which is an absolutely massive swing to make up. Maybe they can do that, but I’d want to at least see several big offseason moves before saying any of them has closed the gap. Even if, say, the Angels manage to sign away Gerrit Cole, they’ll still be something like 20 games behind Houston. Swiping away Cole would have to just be a starting point.

The only team in the division to finish within ten games of the Astros was the Athletics, and while that one is at least feasible, they’re still operating under their own unique set of constraints. As is, Oakland’s planned rotation for 2020 is two prospects, a player who just missed a year to Tommy John surgery, another one who missed half a year to a drug suspension, and 35-year-old Mike Fiers. Of their ten position players who played in 100 or more games in 2019, half of them had a wRC+ below 90. And given their budget constraints, I would still say the Astros are more likely to go after free agents even as they run up against the salary tax threshold (after all, the one-year hit for crossing it is still light); meanwhile, Oakland’s largest contract in team history remains Eric Chavez’s 6-year, $66 million deal from back in 2004.

Maybe that outlook changes as the offseason progresses. There’s still a lot of time to go, things could change, and we’re still not even totally sure what direction the Astros (or anyone else, for that matter) will try and go this winter. But before anything else has happened, they already look to be clearly better than three out of four teams in the division, and still ahead of the one closest to them. And as long as the chances of making the playoffs remain good, nothing is out of reach. Even if 2020 sees the Astros drop in the win column (and it probably will), there’s plenty of room below that to still be a good team, and their window for success is by no means closed.