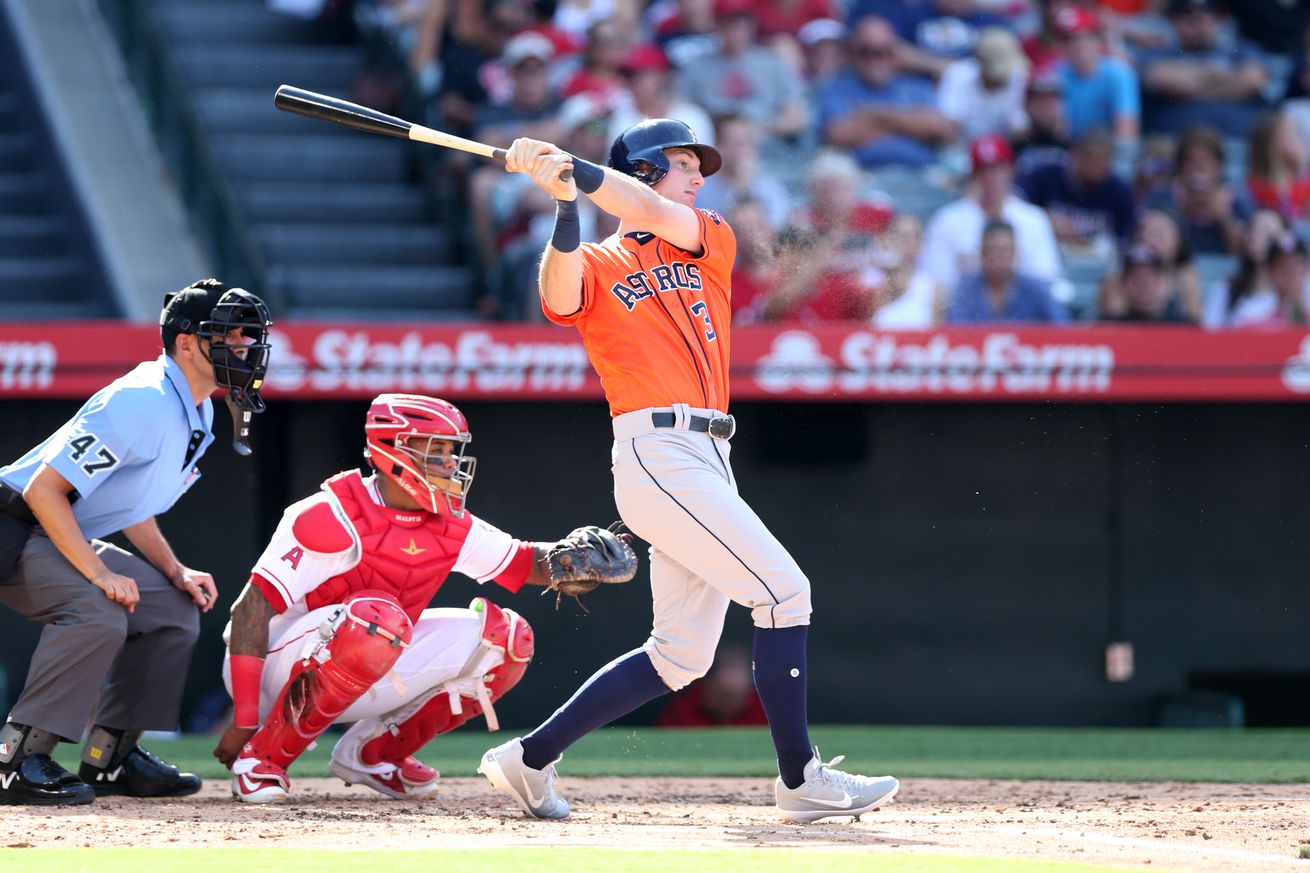 You never forget your 131st, and by that I mean Kyle Tucker’s career 131st at-bat that ended his 2019 season, making him ineligible for the 2020 Rookie of the Year award. Let’s examine that final at-bat where innocence was lost.

With the 2019 Houston Astros season firmly in the rearview mirror, it is natural to look back at key plate appearances to think “What could have been done differently to avoid this outcome?”

Howie Kendrick at the plate against Will Harris, in the seventh inning of Game 7 of the World Series.

Jose Altuve at the plate against Stephen Strasburg, in the fifth inning of Game 6 of the World Series.

Pretty much any October plate appearance by an Astro with runners in scoring position.

But this is going to be an analysis of Kyle Tucker against Taylor Cole of the Los Angeles Angels (of Anaheim) in the eighth inning of Game 162 of the 2019 regular season.

It’s what every kid with a limited imagination dreams of in their backyard. An 8-3 lead, 1 out, a runner on first, in the eighth inning of a regular season game that has no importance whatsoever for either team.

This was actually so inconsequential an at-bat, nobody from Getty Images or USA Today even bothered to take a photograph of it. The lead photo for this article seems pretty close, until you realize that’s Martin Maldonado sitting behind the plate, because it’s a photo from 2018. But what better time to discuss inconsequential things than the offseason?

The at-bat actually did have some minor significance to Kyle, so let’s see what happened:

Pitch 1: 94 mph fastball middle-middle. Swing and a miss. Strike one.

Pitch 2: 89 mph changeup low and away. Swing and a miss. Strike two.

Pitch 3: 89 mph Changeup low and away. Swing and a miss. Strike three, Yer out— of rookie eligibility!

That’s right! This 3 pitch strikeout at bat on Tucker’s last plate appearance on the last day of the regular season marked the moment Kyle Tucker exceeded his rookie limits.

To maintain rookie status, a player must have not accumulated more than 45 non-September days on the 25-man roster, and must not have exceeded 130 at-bats.

At the time of his September 2019 call-up, Tucker was still under 45 non-September days, as he did not play with the big team at all in 2019 up until that point.

He had accumulated 64 big league at-bats, and coming into the final game of the regular season, Kyle Tucker’s career at-bat total sat at 129. He was not given the start in the game, so it looked like the Astros were going to let him exceed his rookie limits in the 2020 season instead. That would let him have a shot at succeeding Yordan Alvarez as the 2020 AL Rookie of the Year.

Instead, manager A.J. Hinch sent Kyle Tucker into the game in the fourth inning as a pinch runner with the Astros leading 8-1. He struck out in the sixth inning in his 130th career at-bat. When Hinch sent him back to the plate in the eighth inning for another plate appearance, his dreams of a Rookie of the Year campaign in 2020 were dashed.

None of them even flirted within the inside part of the plate. Getting hit by any of these pitches would require more leaning than Morgan Freeman in an inner-city public school. Getting plunked didn’t seem to be in the cards.

Unless. . . something could have prevented him from having a plate appearance at all.

Alfonso Marquez was the home plate umpire for that game. Marquez ejected six players and managers in 2019, fifth most in the majors. A well placed quip or word on the way to the plate and Kyle heads to the clubhouse still with 130 career at-bats. I’m sure George Springer could have offered some suggestions.

This is all likely meaningless. The Astros are still waiting for evidence that Tucker can be a reliable everyday major leaguer, much less a Rookie of the Year.

But if a year from now Tucker is sitting on a 30-30 2020 campaign and is watching Jo Adell hoist the AL Rookie of the Year trophy, he’ll look back at his 131st at-bat and think about the time he could have called the umpire a @$%^*&@#, and didn’t.

Yet isn’t that how it always is in life? You think of the exact right thing to say, but not until after the moment has passed.

He’s Kyle Tucker. And he’s not a rookie anymore. (But he could have been.)