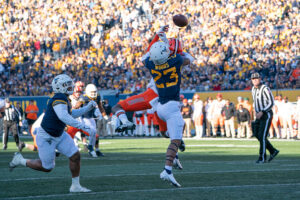 We finish out our position preview portion of our West Virginia Mountaineer Spring coverage by providing our 2022 WVU Defensive Backs preview. The group remains, shall we say, in a state of flux. Some players brought in as corners or safeties may well be playing a different position this Spring and into the Fall. As a result, despite the added number of players to cover, we decided to merge the two and cover defensive backs as a whole unit.

Unfortunately, over the last several years, the Mountaineers stumbled upon a consistent theme in its secondary. Seemingly every year under Head Coach Neal Brown, they have to deal with unexpected attrition. We wrote back when Brown first arrived about the secondary losses. We have been seeing losses in the secondary since. Indeed, out of the players West Virginia lost to the portal since it first opened, 12 (nearly 20%) of those players have come from the secondary. That said, only 17% of those players have been recruited under Brown. Maybe, just maybe, then we can start to hope for some stability in the group.

Some losses hurt more than others. No WVU defensive backs preview would be complete without taking a close look at the attrition. This season, West Virginia lost four members of its secondary: Kerry Martin, Darryl Porter, Jackie Matthews, and Nicktroy Fortune. Each of those players started at least some games over the last few years (though you have to go back a couple to see Martin in the starting 11).

Social media reactions seemed to focus most on Fortune, though that may have been more from the cumulative effect. Based on PFF grades, Fortune represented the least skilled but most experienced departing member of the secondary. Despite the pain of losing a starter, we actually think Fortune’s departure represents an upgrade for the group. For the most part, though, the cumulative effect of the losses matters more than viewing anyone in isolation.

West Virginia has also added secondary talent through the transfer portal. Few of those moves came with a big splash, as the staff has not chased former blue-chip guys to fill the room. Instead, they focused on grabbing several Junior College and FCS transfers. That said, these moves paid dividends.

For example, one could surmise that at least one reason Fortune departed was that his starting spot was in jeopardy. Again, he graded near the bottom of the entire WVU defense by PFF scores. When he suffered an injury in the 2021 season, that opened the door for Charles Woods, an FCS transfer the staff added last Spring. Woods made the most of it, grading out in the top three of all defensive players donning the Old Gold and Blue. Woods remains on the team and should only improve his game with another offseason to prepare.

The Mountaineers also added another promising FCS transfer in Marcis Floyd. His position remains in flux. Originally slated as a cornerback, Floyd has been working more with the safeties this Spring. Four-star recruit Andrew Wilson-Lamp, on the other hand, seems poised to take over the second cornerback starting spot. The staff has offered commentary about the play of the secondary, and Wilson-Lamp’s name comes up often.

As a whole, the staff remarks often about how much longer and faster the secondary is this year than in prior years under Brown. This bodes well both now and in the future. Indeed, behind the guys most likely to start games in the first half of the season (Woods, Wilson-Lamp, Floyd, Jasir Cox or Saint McLeod, and Aubrey Burks or Hershey McLaurin, another four-star recruit), the Mountaineers see plenty of young talent in these rooms.

In general, both the safety and cornerback rooms look young. For returning and incoming scholarship players in those two rooms, the Mountaineers have 14 total players on the roster. Just two of those lose eligibility after this season. Two more will have two years (including 2022) remaining. The other 8 are underclassmen, and their talent level represents a big leap for the team. We mentioned Wilson-Lamp and McLaurin as two four-star players in the secondary. They are joined by early enrollees Mumu Bin-Wahad and Tyrin Woodby, both significantly underrated cornerback recruits.

Caleb Coleman and Davis Mallinger should also contribute plenty this season, and both are sophomores in terms of eligibility. Finally, West Virginia looks forward to adding two more players to the secondary from its 2022 recruiting class: Jacolby Spells and Christion Stokes. We would not be surprised if both make contributions next season, as both offer unique skill sets. Spells represents a four-star lockdown defender, and Stokes offers versatility and a hard-hitting safety profile that will may remind fans of Karl Joseph. The staff expects to add at least one more player to its secondary through the transfer portal, giving them a full three-deep in the secondary.

We close our 2022 WVU defensive backs preview as we started it. Yes, the secondary has work to do to replace starters and built depth. That said, the staff has plenty of talent to mold. By their accounts, anyway, it looks like the returning bodies may better represent what the staff prefers: longer and faster bodies to sustain coverage while they dial-up

pressure from the front.