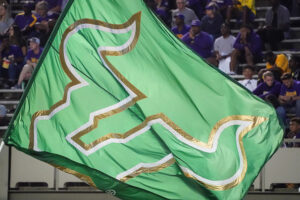 On April 9th, 2022, the USF Bulls concluded their annual White vs Green Spring game. Both teams played hard, but white came out victorious with a 17-14 win. Regardless, there were ups and downs to each team’s play on both sides of the ball. The glimpse from this game is giving some of the biggest takeaways

All that being said, the quarterback dilemma is still in the air. Marsh who might have presumably been #2 on the depth chart considering he didn’t play much last year gave Jeff Scott something to think about.

The conclusion of the Spring game brought a decent amount of closure to the Offensive line scenario. Despite a low-scoring game, the O-line struggled a bit with how intense the defensive lines played. Marsh and McClain along with the other quarterbacks who got in had to be on their toes considering how much the offensive line was letting through.

As practice continues you could assume the Bulls will have to work on their line. The familiar faces from last year on the offensive line will look to improve their game. Without the improvement of a line, the Bulls may be looking at a lot of plays where the quarterback is scrambling immediately.

If you look back to last season the Bulls finished out 2-10. Six out of 10 of those losses the bulls gave up more than 40 points. One of those being a 45-point shutout against NC State and another being a loss to Houston where USF gave up 54 points. The defense is a huge spot of improvement that showed a lot of life for both Team White and Team Green.

Team White and Green both had an interception that came on back-to-back drives. The defensive line came hungry and forced McClain along with Marsh into a lot of distress. The secondary also was alive and stopped Xavier Weaver to only a couple of catches.

USF is shaping to be a much better team on the defensive side of the ball. The bigger bodies that were brought in including Rashad Cheney will help to force more mishaps. Look for the bulls to make more plays on defense this coming year.

Travis Trickett made it known that he wants a fast-paced offense a couple of weeks ago in an interview saying “Get the ball to the players. Get them in space or quick out on the perimeter. Let your players play.” Let’s just say he sent that message well in the Spring game. USF relied heavily on quick and short throws so the wide receivers could make the plays themselves.

The ball was shared around a lot with each of the receivers getting to touch the ball a couple of times. Screens were yet another thing that the Bulls showed off in their Spring game. The Bulls hope that along with their already solid running game they can beat teams through the air with short and easy passes.

With that in mind, be aware of the Bulls trying to beat teams on the ground more than in the air. Considering the Bulls didn’t throw the ball down the field much, guys like Xavier Weaver and Ajou Ajou will have to make their presence known in the middle of the field.

On the Offensive side of the ball, a name that popped was Mychael Hamilton. The senior back concluded his night with 8 carries for 50 yards. Hamilton hasn’t seen much action over the past couple of years, but definitely put his name in the mix following the spring game.

Another familiar face who put up good numbers for the bulls was Katravis Marsh. Marsh who is fighting with McClain for the number #1 spot proved a lot during the spring game. With McClain having a shaky game, the quarterback spot is wide open for either of these guys to take.

On defense, yet another familiar face who played huge was Antonio Grier. Grier ended Saturday’s contest with five solo tackles, two tackles for loss, and one interception. With Grier being a veteran on this defense, look for him to make a big impact this season.

Lastly, Mekhi Lapointe finalized the Spring game with three tackles, one interception, and one pass breakup. Lapointe will take on a bigger role this season considering how young the core group of this team is.

A light in the Tunnel

Regardless of the low-scoring Spring game, the glimpse of the Bulls’ team seems to be promising in certain areas. On the other hand, there’s a lot of work to still be done for USF. Practice will continue on and the next time we see the Bulls in action will be at Raymond James when they play a tough BYU team.