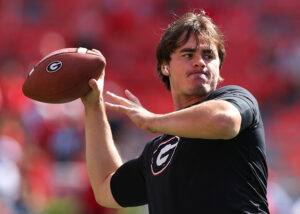 WVU Offense Gets Its Boost with JT Daniels

JT Daniels enrolled at USC as a central piece to its outstanding 2018 recruiting class. In 247Sports’ composite rankings, Daniels finished the season as the number 16 overall recruit with a 0.9919 composite score. Indeed, he still ranks in the top 350 recruits of all time by that score. Daniels certainly had some hype surrounding him. Unfortunately, injuries limited him in his last three seasons after a stellar freshman campaign. Those injuries led him to the transfer portal. Last weekend, he visited Morgantown on his third of three visits. Earlier today, we received word that the WVU offense gets its boost as Daniels announced he will play his final season(s) in Morgantown.

Daniels played 11 games in his freshman campaign at USC. In that year, he threw for over 2,500 yards and 14 touchdowns and finished with a QB rating just shy of 130. For a true freshman, those numbers represent phenomenal output. The pace of play, the speed and size of opposing defenses, and all the little nuances that first appear in the college playbook make life particularly difficult for freshman quarterbacks.

Daniels, not surprisingly, had some tough patches in between his moments of brilliance as a freshman. Daniels entered that year as part of a young trio of very good quarterbacks. Only Trevor Lawrence and Justin Fields rated more highly than he did at the position in that class. Fields played sparingly enough that he transferred to Ohio State the next season. Lawrence was, well, generational.

We have heard some Mountaineer fans lament the possibility of Daniels’ decision. As an initial reaction, unless the players’ character would represent a locker room cancer–and Daniels decidedly does not–you can never say no to a five-star quarterback joining your roster. “He was replaced twice, and once by a walk-on” finds its way off the tongues of fans.

In both instances, Daniels was replaced not because of lack of talent but because of injury. During the lone game his sophomore season before the injury, he completed nearly 74% of his passes. In nine games in his next two seasons at Georgia, he rose to the next level, completing 70% of his passes for over nine yards per attempt and threw 17 touchdowns to just five interceptions. Those numbers are far from pedestrian.

Could he have come back in as the starter in the last few games for Georgia to conclude the 2021 season? Almost certainly, Kirby Smart could have made that decision. But Stetson Bennett became a team leader and made the most of his opportunity to fill in for the injured Daniels, leading Georgia to the precipice of a national championship. As a coach, you tend not to tinker with things that are not otherwise broken.

We have already discussed the potentially explosive elements Graham Harrell will introduce to the West Virginia offense. While Harrell certainly found success in his prior stops with freshmen quarterbacks, the ideal situation remains: having a veteran quarterback comfortable with the offense presents an ideal situation for offensive success.

By all accounts, Daniels has been very professional in his approach to his transfer destination. Going into his fifth year of college, Daniels seemed laser-focused on the offensive pieces around him and the offensive systems in which he would work. This makes sense. Ideally, he would play for a season (though he has two years of eligibility remaining), produce great numbers, impress scouts, and ride off into the 2023 NFL Draft positioned well for a second (or even first) day selection. The best way to make this happen is to put yourself in a system that caters to that.

Daniels was already familiar with Harrell’s system, and he also knows that Harrell grooms quarterbacks well. We cannot say how much that background played into Daniels’ decision, but we know that it certainly did not hurt.

What This Means for the Quarterback Room

One thing should be clear. The West Virginia staff did not bring Daniels in to sit on the bench. Given Daniels’ ultimate goal, Daniels’ intention is clear. He wants to lead this football team. We hear this question from some fans: how does this impact the rest of the quarterbacks? We hear the related question from fans: is it wise to bring Daniels in with our young quarterback depth?

Again, we say this: you do not turn away a five-star quarterback who wants to play for your team in all but the rarest circumstances. Given the cold reception Head Coach Neal Brown received after his first three seasons with a sub-.500 record, Brown feels a need to win now. Indeed, after last season, he told fans he was going to fix things.

From that moment, Brown handed over the reins of his offense to a true offensive coordinator. We saw Jarret Doege transfer. Now, Brown brings in highly-coveted quarterback Daniels to run that offense. Brown is certainly doing the best he can to right the ship.

How Will the Rest Respond?

How this impacts the decisions of the other three quarterbacks currently in Morgantown remains anyone’s guess. That said, we would certainly understand if one of those quarterbacks decides to transfer. Forced to guess, we would say that either Garret Greene or Will Crowder seems most likely to leave, though we certainly hope they do not.

Long term, though, we think that the young quarterback(s) who remain will benefit from Daniels’ presence. Given a chance to learn from a gifted quarterback and former five-star prospect can certainly only help their development. Who knows? With a high octane offense led by a veteran, maybe we even see a handful of games where the backup gets to play a few snaps. As the WVU offense gets its boost from Daniels, the quarterbacks who remain should be uplifted by Daniels’ influence.

We know, of course, that Harrell runs his offense with an expectation to score on every possession. As a result, we expect that, even late in lopsided games, Harrell would ask his signal-caller to sling the ball.

We also know that Daniels has an injury history. We hope that he overcomes that history and finds health in Morgantown. If he does not, however, any young quarterback would certainly have an opportunity to take the reigns of this offense. As a result, contrary to some fans’ beliefs, we doubt very seriously that freshman quarterback Nicco Marchiol would transfer.

Daniels has two years to play, but it seems he would strongly prefer to play just one, leaving the door wide open for the remaining quarterbacks to take over for 2023. As it turns out, Daniels may not just be giving the WVU offense its boost in 2022, but he may well be setting the tone for the next several seasons.

The post WVU Offense Gets Its Boost with JT Daniels appeared first on Last Word on College Football.