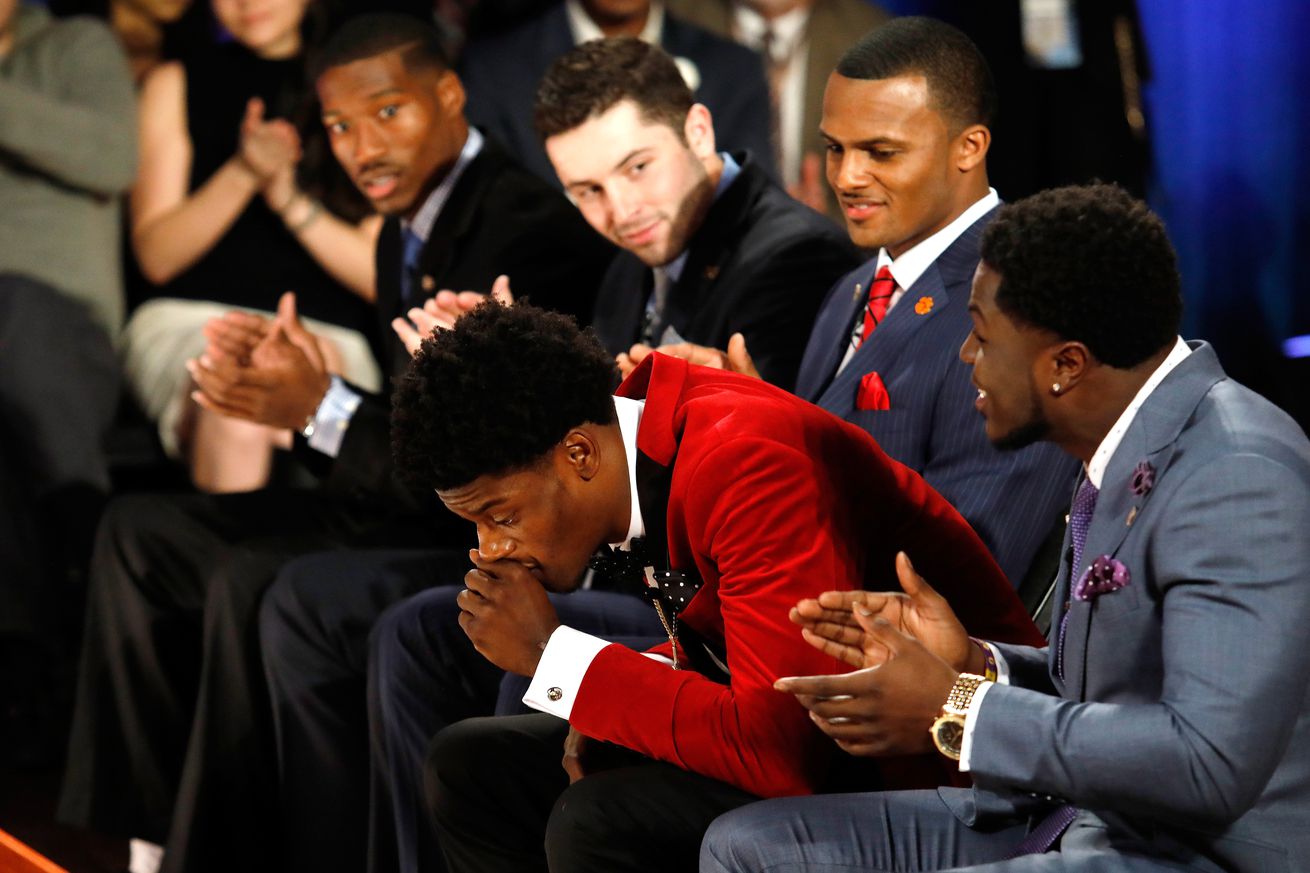 Who would you rather have at QB for the next 10 years?

The Texans play the Baltimore Ravens this week. It’s an important game when it comes to the AFC playoff picture and could have huge implications that last far beyond Week 11. Both teams are led by young quarterback hotshots and since they will be dueling this weekend, there is no better time to ask: Who would you rather have running your offense?

Deshaun Watson and Lamar Jackson both came into the league as first round picks, but were drafted lower than many people expected them to be. Watson was the 12th pick of the 2017 NFL Draft and Jackson was the 32nd pick in the 2018 NFL Draft. Despite the fact that both players tore up the ecosystem when they were playing on Saturdays, there were doubts about whether their abilities would translate to the NFL. Those who doubted them are now looking quite foolish.

Watson and Jackson both have their teams in the thick of the playoff hunt now. Both are also legitimate MVP candidates. It would seem that there are at least 25 teams (or more) that would love to have either of them leading their franchise. But which QB is actually better?

The ability to play QB in the NFL relies on throwing the ball. To that end, both Watson and Jackson have put up incredible stats this year. When I first started to look at the numbers, I expected Watson to far surpass Jackson as a passer. Instead, the numbers show that they are actually quite close, with Watson being slightly superior.

The numbers are quite similar. It ultimately comes down to what you see. Deshaun’s completion percentage is not a fluke. He is making difficult throws each and every week. He has the ability to locate the deep ball and it shows. He only has 3 games this year where he has thrown for less than 250 yards. He has the same amount of games (3) where he has thrown for over 300 yards, including a masterclass against the Falcons where he put up 426 yards and 5 TDs.

On the other hand, Lamar has been growing as a passer but hasn’t yet found consistency in that part of his game. He has failed to top 250 yards through the air in 6 games this season and has only thrown over 300 in one, the game against the Dolphins in Week 1. Most of his production through the air is due to defenses selling out to stop the run. This allows him to have a lot of easy completions and open receivers running down the field. He has the stats, but the numbers aren’t being completely truthful.

The obvious answer here is Lamar. He has skills that the NFL hasn’t seen since Michael Vick was a vapor trail leaving defenders in the dust. Each and every week, Lamar seems to pull off some highlight reel run that displays just how unique he is in that regard.

This season, Lamar Jackson has 702 yards, 6 TDs, is averaging 78 yards/game, and is ranked 11th in league in total rushing. Those are impressive numbers. Statistically, Jackson is proving to be a better runner than teammate Mark Ingram, who makes a living as an NFL running back. The fact that Jackson is so dangerous on the ground has caused some to quip that he is just a running back playing the wrong position. However, you can look at his passing stats and know that he is more than that.

Deshaun is no slouch when it comes to pulling the ball down and finding some space to run in his own right. Deshaun has 279 rushing yards and 5 TDs but is only averaging 31 yards per game. Deshaun’s rushing ability is most notable in the ways he is able to escape pressure. His ability to extend plays has led to more passing highlights than running, and the Texans are just fine with that.

Lamar is far ahead of Deshaun in both rushing yards and yards per game. This is a product of the offense he runs. While Deshaun typically stands in the pocket and only takes off as a last resort, Lamar is being encouraged to use his prodigious running ability to gash NFL defenses left and right. This isn’t a bad thing. The Ravens have been able to use this scheme to their advantage and work their way to a 7-2 record. Good coaches recognize the strengths of their players, and the Ravens have wisely allowed Lamar to use his greatest gift to tremendous results.

With both QBs being in the running for NFL MVP, it is undeniable that they both irreplaceable to their respective squads. Can you imagine the Ravens or Texans trying to compete in their divisions without Lamar or Deshaun? It would be laughable. The reason either of these teams are considered playoff contenders is due to the breath-taking, show-stopping, “Did you SEE THAT?!” play of their quarterbacks.

Deshaun is the heart and soul of the Texans now. He was already the unquestioned leader of the offense but once J.J. Watt went out for the season, Deshaun took over as team leader. The rest of the team feeds off of his play. When Deshaun is playing lights out, the team vibes with him and plays better overall. When Deshaun is having an off day, it seems like the team follows suit.

Lamar has a similar impact on his team. All you have to do is watch the video of John Harbaugh’s sideline conversation with him to know that he is a leader in the Ravens clubhouse. There is no other QB in the league who can do what Lamar Jackson has done this season. The entire Baltimore offense is built around him.

The Ravens run such a specialized scheme that I’m going to say that Lamar Jackson has a bigger impact on his squad. If he went down, there is absolutely no one who can come in and run that offense. If Deshaun happened to go down, the Texans would be able to find a QB to limp to the finish line. Either way, both teams should use whatever team clergyman they have to bless these QBs.

Deshaun Watson and Lamar Jackson have both had stellar starts to their careers. If they continue on this trajectory, they will be changing how QBs are evaluated and what an NFL QB is believed able to do. This season is unique in that not only are they both at the top of their game, but we get to see them play each other. Regardless of what happens Sunday, both should have long NFL careers.

I would guess that Deshaun has the better overall career. He’s special in a way that is hard to explain. He can make every throw in the book, has a deep understanding of NFL defenses, can escape surefire sacks, and make magic out of nothing. The most encouraging thing about his play is that it seems to be repeatable. He isn’t necessarily getting lucky as much as this is what he can do each and every play. Watson’s ability to stay in the pocket and scan the field, but escape and still make something happen is a rare trait.

On the flip side, Lamar Jackson’s success is largely due to scheme. I do not say this as an insult. After all, if Deshaun had a coach who could scheme better, he may be more openly talked about as the best QB in the NFL. I simply mean that Lamar is able to do some very specific things better than anyone in the world. The Ravens have found that, isolated it, and used it to destroy teams. My favorite thus far was when they pantsed the Patriots in prime-time.

Lamar relies heavily on his legs. He’s able to see the field in a way few other players can and when he finds a hole, he’s gone. His passing game is dependent on his running game. If he isn’t able to find space, he struggles to stay in the pocket and make plays from there. This could of course just be a byproduct of him being a young player. If he can learn to sit in the pocket and let certain plays develop, Lamar would be unstoppable.

At this time, I think Deshaun is the better overall quarterback. I believe he will end up having a longer and better career than Lamar.

I’m going to stick with Deshaun Watson as the QB I’d rather have. That being said, I’ve been extremely impressed with Lamar Jackson this season and what he is able to do. He is such a special talent and I hope he’s able to play his way for a long time.

Now I leave it to you. Who would you rather have. Jackson or Watson?