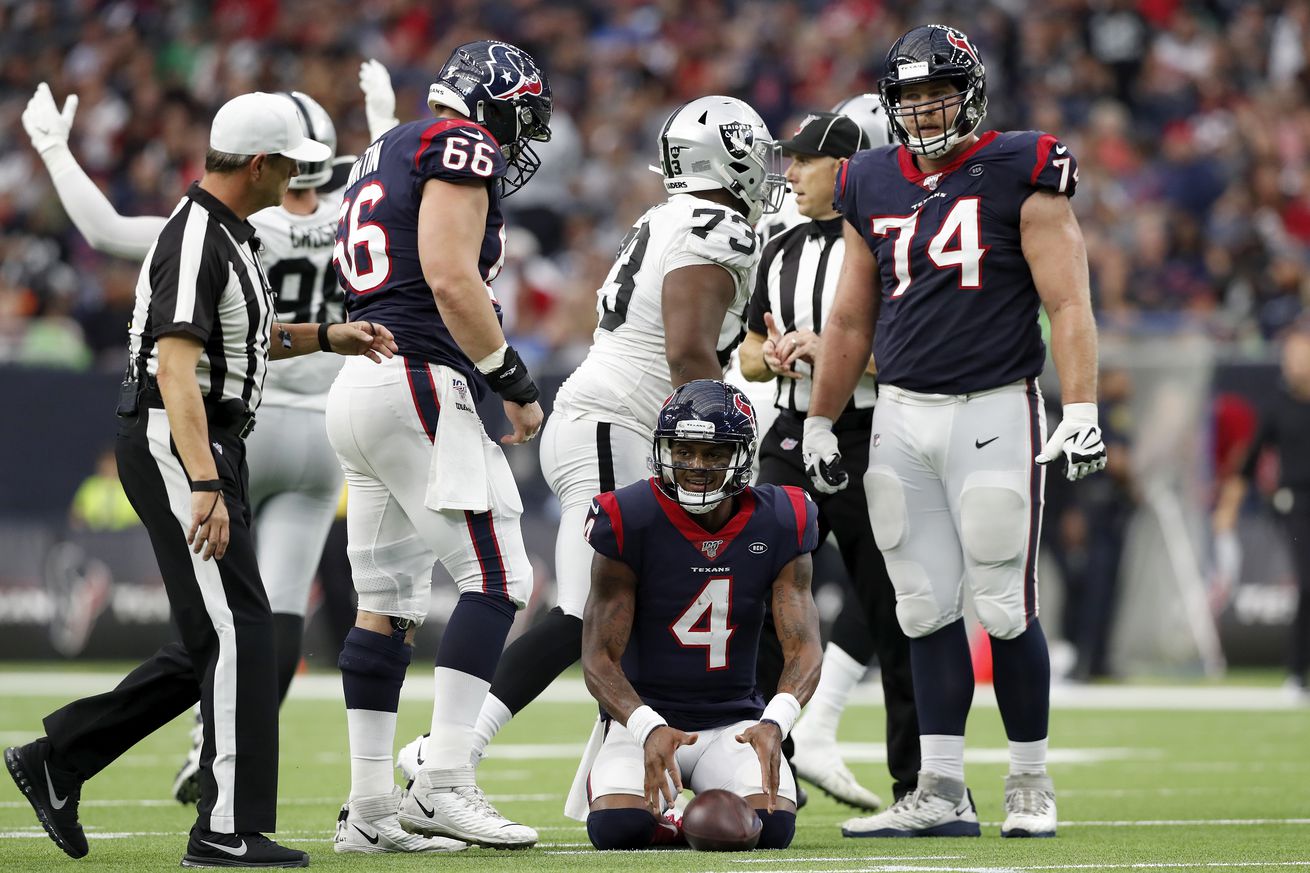 Save yourself the disappointment.

We saw what happened Sunday.

The Texans pass defense was gashed, once again. Then Deshaun Watson arrived with his superman cape to save the day for the city of Houston. Most great quarterbacks turn lemons into lemonade but Watson takes old dirty urine and turns it into the greatest damn wine this side of Italy.

It is the same old story yet we convince ourselves of change every single time. Owning a Maserati is cool but not if your house has decaying walls and reeks of sewage. That is kind of what the Texans are at the moment. Most people “have a guy for that” when it comes to these issues but the Texans will just point you to the shiny object in their driveway to distract you from their wreck of a home.

The pass defense is miserable and watching them try to play both zone or man brings out your pessimism in the worst way. The nightmare of Hunter Renfrow running up the field uncontested makes me never want to dream again. I feel blessed by every deceased loved one watching over me that Tyrell Williams let his gloves marinate in vaseline before he took the field.

And I have not even touched on the injuries. The entire secondary is banged up. Their section of the locker room is just an extension of the Houston Methodist Hospital emergency room. It is not as if they were Legion of Boom to begin with, they are the guys you would want backing up that old Seahawks unit. So they acquired Gareon Conley who was voted off the island in Oakland earlier last week. A defensive back who gets banished rom the S.S. Gruden is not usually a life changer.

JJ Watt is done for the season. At least the Texans are used to that. Laremy Tunsil was hurt and we can only hope that the league leader in false starts makes a healthy return. Will Fuller is Will Fuller.

It is funny when I listen to these national sports television shows and “Are the Texans a Super Bowl threat?” makes the topic list.

Here is my in-depth, well-thought, elaborative answer to that question: They are not.

Unless Deshaun Watson performs his magic show and pulls a rabbit out of his hat several times per game, the Texans are a peanut butter and jelly sandwich compared to the Ruth’s Chris Steak House meals that the Patriots, Saints, and Packers get to devour.

The Texans blew his Week 1 brilliance in New Orleans by playing prevent defense when the Saints needed seven yards. They almost blew his superhero powers in Week 3 when the Chargers pulled a Texans and blew their shot at coming back. They fell down 10-0 to the Chiefs while somehow only running one offensive play during the entire sequence. They did everything to make Jacoby Brissett and the Colts look like The Greatest Show on Turf the week after.

That brings us to last Sunday. Who else can escape a sack, take a cleat to the eye, and throw a touchdown pass while falling to the ground? Is that really what it took to beat the Raiders?

The fact that this team is 5-3 is the greatest miracle in American sports since the 1980 Men’s hockey team.

They could be 1-7. None of their wins should leave you feeling hopeful except for the Week 5 blowout against the Falcons who would be 0-8 if Nelson Agholor had real hands. Hooray.

It took me a long time but I have seen the light. Actually, I have not seen it because there is none.

They are not built to make a deep postseason run. They are built to get your optimism high just so they can blow it unless Deshaun Watson becomes Houdini.

Somehow, the Texans do everything you should not do to win a football game. Predictable play calling, blown coverages, an utter lack of a pass rush. Rinse and repeat.

I wrote a piece two weeks ago about why Deshaun Watson should win the Most Valuable Player. If my points then were not convincing, this one should be.

They might as well give him the franchise for free and let him control everything. He kind of already does.

Please do not fool yourselves.