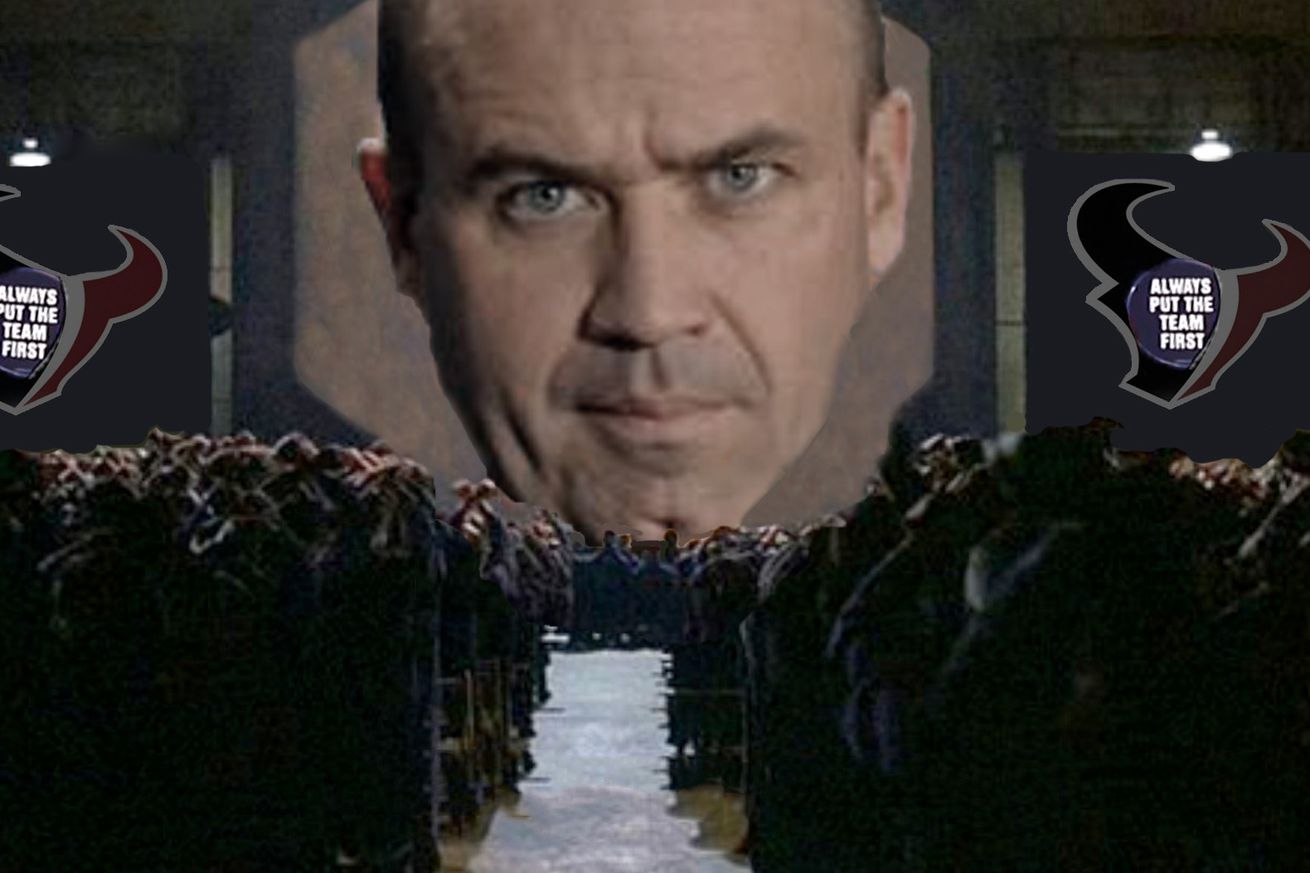 We are at war with Baltimore. WE HAVE ALWAYS BEEN AT WAR WITH BALTIMORE.

The People’s only information source has returned with fresh glorious news about only team that matters. You read now or we find you.

Rise for People’s Anthem of the Houston Texans:

The Houston Texans, whose example of greatness is only exceeded by its humility, returns refreshed after a sound thrashing of the hopelessly outclassed team “Team Bye Week.” We do not understand why NFL insists on scheduling Bye Week to play against vaunted Texans team, but the football loving fans and players will never object to such an easy win, especially after a return from imperialist kingdom of Britain.

With such an easy win under the belt it is not worth mentioning here as displaying such dominant effort would be untoward a modest team like Texans. That said, it appears easy victory is on schedule now as Texans march toward east to face Baltimore Ravens, a team dragooned away from rightful home in Cleveland by senile owner, a move that was so poorly thought out and so disastrous that the old fool died after doing so. Let this be a lesson to all imperialist owner pigs who would steal teams away from the loyal hardworking fans who support them!

Even the name of Ravens is catastrophic as it is homage to a drunkard who is only famous for writing mildly scary stories, most of which involve his desire for carnal relations with his sister or his cousin or possibly both, the Ministry of Information does not condone such behavior and has declined to investigate this any further.

Despite the incestuous nature of the team, rivaled only by actual family tree violators in Tennessee, this Ravens team is in dire straits. Just look at the quarterback situation, if you can call it that. After trading away Joe Flacco for a bag of magic whiskey, likely to be wasted on the drunkard Poe’s grave, and having not drafted a quarterback in several years, the Ravens in what can only be considered an act of reckless desperation turned the reins of the team over the wide receiver Lamar Jackson. Jackson, as far as the Ministry of Information knows, and it knows everything there is to know don’t even worry about it, has only been on roster since week one of season. Before then, he doesn’t even appear to have existed in football world. This hubris is bad enough, but to make it worse, the football-watching world, who secretly is envious of Texans and all Texans fans and wishes only to see Texans suffer ignominiously, is hailing Jackson as some sort of false football savior.

Let us be clear, comrades, there is only one quarterback who can claim this mantle, but won’t because it is not even sufficient enough praise for his greatness, and that is Hero of Texans Offense, Comrade Field Marshal Deshaun Watson. Watson has created football magic for all the football world to appreciate and enjoy, but all you will hear, all you will read about is the overrated offense created by Baltimore Ravens. It is enough to make the Minister of Information nauseous and demand the Pepto Bismol of the People to quench the pain felt in his stomach caused by the hatred in the hearts of the rest of the NFL.

But that is extremely biased sport media for you. After all, where else will you hear about conspiracy involving magical garbage cans and plots so intricate and stupid that it would put children’s game Mousetrap to shame? The rest of the sports world hates Mother Houston, they are jealous of us! They have been ever since our glorious teams emerged from obscurity to upstage their abject mediocrity. Comrades, it is upon your mighty shoulders that the defense of the Motherland rests. Do not let the weak-willed and weak-minded sports blob tell you what to think about our beloved Mother Houston. Stand for her. Fight for her! Defend her from all haters!

There can be no doubt as to the overall sports greatness of all Houston sports teams, especially to the greatness of the football-loving fans and players of the Houston Texans. Their reputation among the spiteful teams in NFL grows daily. Even just recently, the lesser Harbaugh brother praised the People’s Running Game and the embodiment of our vast strength of will, Carlos Hyde. Perhaps there is hope for the unbelievers after all, but it is still very much in doubt.

Also in doubt is the defense of the Ravens. The secondary in particular is suspect, given that one of their corners is Marcus Peters, who has been passed around the NFL like illicit substance at Clay Walker concert. On his third team now in five years, the only conclusion one can make about Peters is that he is widely despised by teams that he plays for and that he is hopelessly out of his depth. This will be made clear against the Texans, whose aerial attack has been known to cause traumatic stress in defensive coaching staffs around the league. Do not look for these coaches, as they will lie to your face, unlike the painfully honest Ministry of Information.

And while the world might think Ravens offense is all the rage, the transitory flavor of a brief time period, the Texans defense only grows stronger. Just in last couple of days, our defense, which could stop the tides of the Houston Ship Channel if it so wanted but does not because the Ship Channel is good for the economy and the water is kind of smelly, has improved its secondary once more. No longer is it the greatest secondary ever created in football history, it is now even better as the Texans have claimed former first round draft pick Vernon Hargreaves III off waivers. The Buccaneers were fools, fools we will make pay for their idiocy, to give up such a tremendous talent who does not have injury concerns at all. Between him and Conley in the secondary, the rest of the league will never complete another pass against the Texans unless the Texans grow bored and allow the opposing offense to make yardage just to make things a little interesting for themselves.

Our might is formidable. Our team is undefeated. And the team that we face is riddled with nothing but question marks. Victory is all but assured for the People’s Football Team of Texas. Let us go forth and claim it on Sunday!

TO THE INEVITABLE TRIUMPH OF THE TEXANS, LEAD US ON!