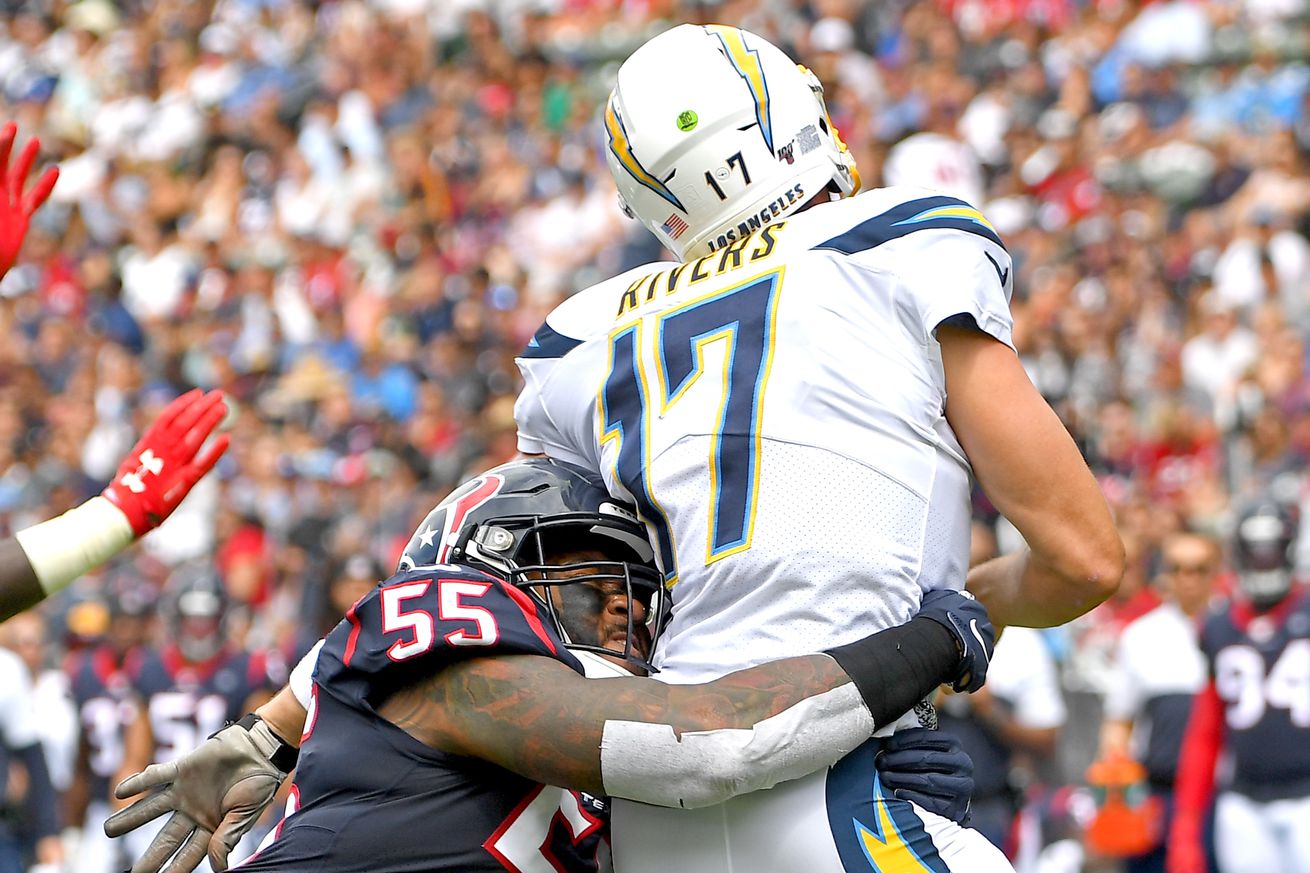 Five Houston players who may not get enough credit.

When you think of the Houston Texans, images of J.J. Watt, Deshaun Watson and DeAndre Hopkins immediately come to mind. As well they should. But this year, Houston is seeing a surge of lesser known players who are making a big impact on the team’s fortunes. While quarterbacks and big play receivers often dominate the news cycle, this is still a team sport and 53 men make the game happen.

So while we’re on a bye week, let’s take a moment to stop and say, “I see you!” to five big-time players who deserve more of the spotlight.

We’ve been bragging on this guy in these parts for years now. The second round pick out of Mississippi State in the 2015 NFL Draft embodies head coach Bill O’Brien’s “Be the best teammate you can be” philosophy, showing up every day with lunch pail in hand and can-do attitude in mind. Over the course of his career, McKinney has played 71 games, notched 452 combined tackles (273 solo), grabbed 11 sacks, forced 4 fumbles, and snagged 1 interception.

Pro Football Focus currently has McKinney scored at 80.5 on the year, with an 88.1 performance last week in London. Athlon Sports listed McKinney in their top-10 inside linebackers enetering 2019, and McKinney has done nothing but prove them right so far.

Along with a career-high seven pass break-ups last year, McKinney became the first Texans player with at least 100 tackles, one interception and one sack in a single season since fellow linebacker Brian Cushing in 2011.

The #Texans defense shut down Jacksonville in London pic.twitter.com/jFEcUxmKX4

In the Gary Kubiak heyday, tight ends were an integral part of Houston’s offense, with Owen Daniels, to date, being the biggest asset at the position. While the talent level and production from the TE group eroded greatly over the years, last season’s addition of the “Jordan Twins,” Jordan Akins and Jordan Thomas, gave the Texans’ position group a desperately needed shot in the arm.

If those two added some value, Darren Fells has been invaluable.

The UC Irvine athlete never actually played football in college, opting to spend his time on the basketball court instead. In 2013, Fells decided to take his turn on the gridiron and signed with the Seattle Seahawks. His stint in Seattle didn’t last long, and a few months later Fells found himself on the Arizona Cardinals practice squad. Fells would work his way into the game day lineup before leaving Arizona behind for stints with the Detroit Lions and Cleveland Browns.

Proving that it’s all about the right fit, Fells already has twice as many touchdowns in 2019 as he’s ever had in a single season. He also has more catches. While Deshaun Watson is totally amazing, he might not be quite as effective without guys like DeAndre Hopkins and Darren Fells on the other end of his passes. Odds are that Fells is ecstatic to be one of DW4s guys.

When Houston let Tyrann Mathieu walk in free agency, it seemed like a smart move based on the money Mathieu made signing with the Kansas City Chiefs. When Andre Hal retired, Houston went from “smart move” to “oh, no!” leaving Justin Reid as the only solid starting safety on the roster.

Yet another former Cleveland Brown, Gipson, an 8-year veteran, had one of his best seasons in 2014—five years ago—when he suited up for the Browns, notching 52 combined tackles, 6 interceptions, and 1 touchdown.

Over the course of 7 games in Houston, Gipson already has 25 combined tackles, 2 picks, and a touchdown. He also carries the distinction of being the first player to intercept Chiefs quarterback Patrick Mahomes in consecutive seasons. As in, Mahomes hadn’t thrown a pick last year til he faced Gipson – who not only pointed that out prior to the Texans-Chiefs game this year, but then became the first guy to pick Mahomes in 2019 as well.

“You know why I called! You balled!”

S Tashaun Gipson Sr. got the call from @DeionSanders after the win. pic.twitter.com/tViZyWVVRr

Lining up alongside Benardrick McKinney has paid dividends for fellow inside linebacker Zach Cunningham. Thus far in 2019, Cunningham has 68 tackles and 1 sack. While Cunningham has shown flashes of brilliance his whole career, this seems to be the season where it all “clicks” for the third year player.

There’s no debate that Texans linebacker Zach Cunningham is having the best half season of his career.

The debate is just how good can Cunningham be over an entire season. Can he become a Pro Bowl player? Is an All-Pro selection on his horizon? Or will he continue to toil in near obscurity, content to consistently do his job well against the run and pass as well as on special teams?

“He’s turned into a special player, and he’s making some awesome plays. He’s such an important piece of our core defense. He makes some of his biggest plays on third down. He makes big plays week in and week out.”

The 5th round pick in the 2016 NFL Draft didn’t exactly light the league on fire his rookie year, averaging a pedestrian single solo tackle per game started that season.

But, man, how things have changed. At the Week 5 mark of 2019, Reader was the #1 interior defensive lineman in the NFL.

Sleep on D.J. Reader at your own risk https://t.co/krNpcsdVup

D.J. Reader takes the LG to school. Gives him the the right hand to stun him and knocks the guard off balance. The Reader closes for the sack. Mercilus just toying with the LT. If Reader doesn’t get Rivers. Mercilus is right there. #Texans pic.twitter.com/zxtG7yoU7u

While Reader isn’t #1 anymore, he didn’t fall far by week 7:

D.J. Reader is not only the youngest player on this list; he’s also the lowest-drafted. #DontSleep https://t.co/AGk0JYvkiA

Doug Marrone on D.J. Reader: “Reader is probably one of the best players that we play against on a consistent basis. Not a lot of guys know about him, because they’re not in our division.” pic.twitter.com/42FLwf4MhR

Not bad timing for a player who’s in a contract year and will be a free agent after the 2019 season ends.

While Pro Bowl rosters have yet to be announced, there’s a good chance we’ll see some of, if not all of, these guys on there when the next Pro Bowl rolls around in 2020. Until the moment these guys get the recognition they deserve, chances are they’ll continue to rise under the radar, solidifying their spots on Houston’s roster for years to come.

Who are your top five unsung heroes for the 2019 Houston Texans?