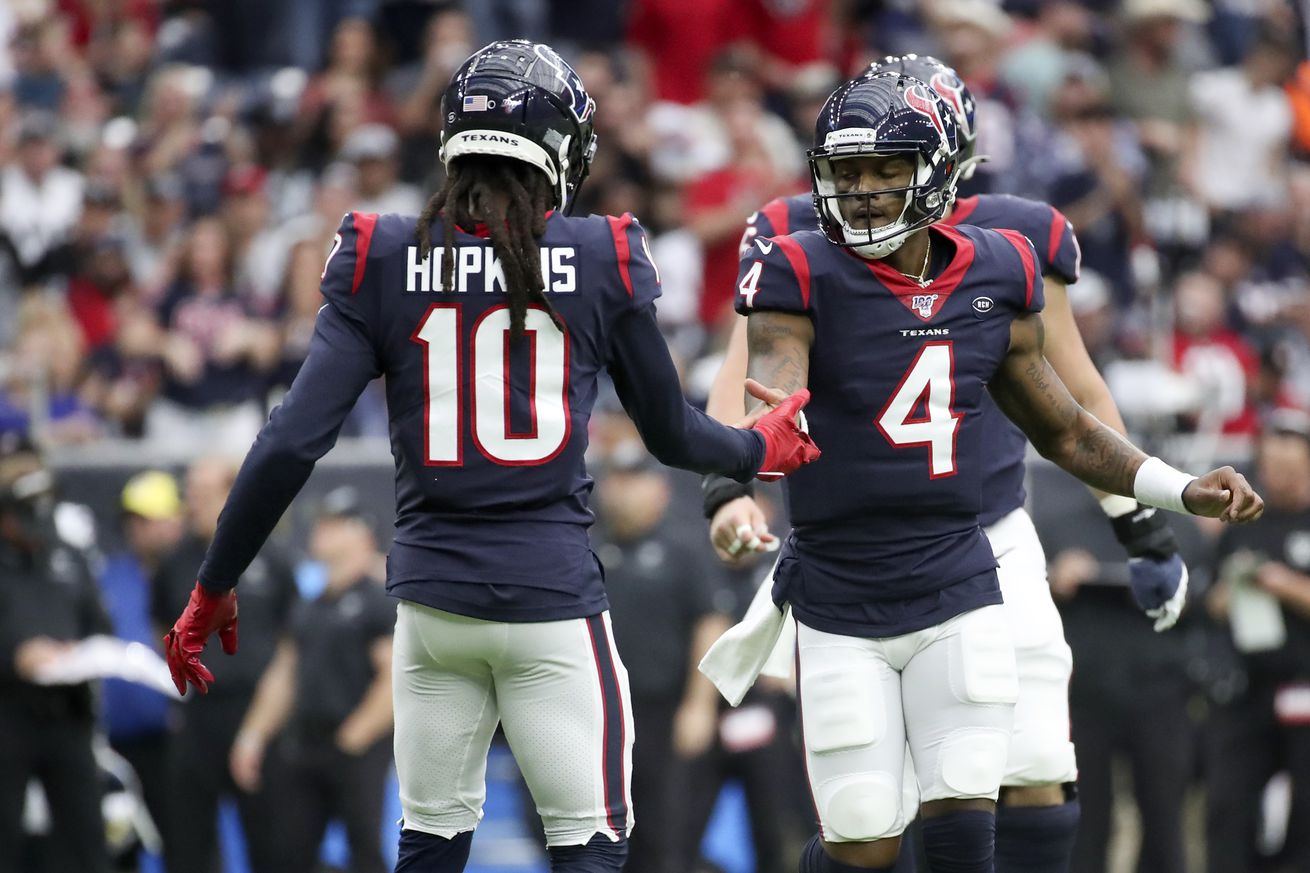 At the midpoint of the 2019 season, the Houston Texans are sitting at 5-3 and half a game behind the Colts in the AFC South. Mired by injuries and plagued with one possession games, the Texans season is all but settled heading into the back half of the year.

Even with a winning record through eight games, the substantial talent loss the Texans have incurred will be devastating down the road. Did you even remember that Lamar Miller was the starting running back and Seantrel Henderson was supposed to be yhe right tackle this season? Those players seem so long gone that they might as well have suited up with David Carr.

Whether you realize it or not, the Texans are all-in this season. May not be the best timing considering the injuries, but the future of the team has been traded to make a run in 2019.

Now. Not next season or in a couple of years. Now. Like the parting of the Red Sea, the Texans have to take advantage of the miracle before us and never look back. That miracle? Deshaun Watson. Against the Falcons he was the first player in NFL history to pass for at least 400 yards and five TDs with five-or-fewer incompletions in a single game. Through eight games he’s torched opposing defenses for 2,231 yards and 16 touchdowns with five interceptions. Not to mention he’s produced 242 rushing yards and five rushing touchdowns. Ladies and gents, we have ourselves a bona-fide MVP candidate.

Though how miraculous a season this has been for the Texans, the story so far in 2019 has been the inescapable one possession games. Seven of the eight games this season have been decided by one possession. Playing to the least common denominator of your opponent is not a formula for success. Plain and simple, it is not within head coach Bill O’Brien’s game plan nor the Texans’ DNA to command the game and lead from the beginning. For fans, this spawns the well known excruciating agony that each game will be close. Through eight games, it’s been nearly a toss-up for each and every one whether the Texans will be victorious or not.

To consolidate thoughts and hand out awards – both positive and critical – here are our accolades through the first eight games of the season.

Just one month ago I wrote that Max Scharping has a long way to go. I lamented that his feet were too low, his technique all over the place, and he did not match the position the Texans had put him in. Due to injuries and opportunities, Scharping has stepped into the left guard role and truly elevated the play at the position compared to those the last two years. He’s started the last six games and according to our Sack Tracker he’s only been at fault for half a sack (aka it was someone else’s fault on that play too). There’s seven Texans’ offensive lineman who have more sack attributed to them than Scharping. Though still working out his consistency issues, Scharping has proven to be the most instrumental of the Texans rookies.

DeAndre Hopkins is currently the 97th all-time leader in receiving yards in the NFL. He started the season 121st, and if he keeps at this pace he’ll end the season around 75th all-time receiving yards. The dynamic duo from Clemson have been tearing up opposing defenses all season with strong possession based passes. Even if you believe Hopkins disappears time to time, it’s certainly not for a lack of trying. Hopkins is the fourth most targeted player in the NFL. As long as these two athletes are on the field, the Texans have a chance.

Bradley Roby is going to miss some games. Jonathan Joseph’s body finally caught up to him. Lonnie Johnson is in concussion protocol. Tashaun Gipson Sr.’s back is still healing. The only healthy starting secondary player for the Texans is second year safety Justin Reid. In last Sunday’s game the Texans rolled out safety Jahleel Addae and newly acquired corner Gareon Conley as its first line of defense. The two defenders struggled mightily against a improving but not yet formidable Raiders’ offense. Along with rookie Lonnie Johnson’s concussion, the main concern is that Keion Crossen and Cornell Armstrong, unheard of signings off of the street, are going to record valuable playing time in the weeks to come.

Time and time again the Texans dig themselves a sizable hole they have to pry out of. On their first series, the Texans have punted six times and fumble twice. The Texans’ offense is offbeat while placing the defense in less-than fortunate field position. The worst first quarter performance was against the Chiefs where the Texans ended the first quarter down 17-3. The Texans have gotten away with unfortunate starts in the first eight games, but if they try to pull that off against the Ravens, Colts, and Patriots they’ll surely be mistaken.

Though my colleagues at BRB may think D.J. Reader or Kenny Stills are bigger suprises, ask yourself “where would the Texans running game be without Carlos Hyde?” Through eight games, Hyde has amassed 111 carries for 461 yards and three touchdowns. Though his yards per carries is not all that stellar, running backs under Bill O’Brien are never going to see efficient rushing numbers. Hyde has taken Alfred Blue and Lamar Miller’s roles and combined them into a strong 2019 performance. From almost being cut by the Kansas City Chiefs to being the Texans’ premier running back, it’s been quite a whirlwind for Hyde.

Yes WR Will Fuller V has been less than the prodigal son of long passes and 70-yard screen passes as promised. Coutee suited up on Sunday but did not see the field. The Texans opted for versatile receiver DeAndre Carter over Coutee who may be in Bill O’Brien’s doghouse of late.

Only 13 catches on the season does not bode well for the second year receiver out of Texas Tech. A perfect fit for Watson’s scramble abilities, Coutee has been unable to find and hold a role in this offense. The success of tight ends Jordan Akins and Darren Fells have stolen some of Coutee’s reps while Kenny Stills has subbed in nicely to the offense. The Texas native will look to for a much better second half of the season or risk being cut in the offseason.

The Pats are at it again. They are the best team in the NFL and have steamrolled through their schedule without breaking a sweat. Their defense have forced 22 turnovers, which is seven more than the next team. The Patriots truly bring the worst out of every team. They have a +189 point differential, which is 131 more than the next team. No one shines brighter under the lights than Tom Brady, and now that the Texans have no one to rush him, this game could get ugly fast.

Play We Needed: 4th and 3 to Beat the Chiefs

What a gutsy call against the Chiefs in Kansas City to seal the game. Though this exact play was used twice against the Colts, which led to them ultimately guessing the route combination, this play was the least Texans-like call all season.

The last thing any team wants to do is give Patrick Mahomes a chance to drive down the field and tie the game up. With this play O’Brien locked in an upset over the Chiefs and added a strong win to this team’s resume.

Play We Wish We Had Back: Watson’s Redzone Sack Against Colts

This play might as well changed the entire course of the season for both teams. Somehow the Colts next four games after our Week 7 matchup are against the Broncos, Steelers, Dolphins and Jaguars. Which means because of this win, the Colts could feasibly be 8-2 by the time Houston plays them next.

After a strip sack at the Colts own 11, the Texans go -9 yards in four plays to ultimately kick a field goal on a potential touchdown drive. The Texans had the point blank opportunity of scoring a touchdown and taking a 10-7 lead. A touchdown here instead of a sack could mean the Texans win this game. A win against the Colts in Indianapolis would have propelled the Texans into the conversation with the best teams in the league. The Texans Sack Tracker has a full breakdown of this play.

DeAndre Hopkins threw an interception. You read that right. pic.twitter.com/z3nutALR7i

A double pass in the red zone? With over two minutes left? With Deshaun Watson at QB? This play call is dumber than me in a Calculus 2 class. This is a play call drawn up by someone who is desperate trying to beat a better team. In a game decided by one possession, this was that one possession that lost the game.

What else is there to say. He’s everything we’ve waited for in a QB. He’s worth all the draft picks, all the [NAME REDACTED] interceptions, all the conveyer-belt QBs who stayed for one season, and all the losing. There’s something magical about his style of play that makes you stop and admire. From scrambles out of the pocket for a first down to dimes down the field to Hopkins, Watson is developing into one of the greatest players in the league.

Even with all the injuries and a difficult stretch ahead, the Texans have playoff hopes and division titles within their reach. Don’t count them out, even if the season seems lost after Watt’s injury.