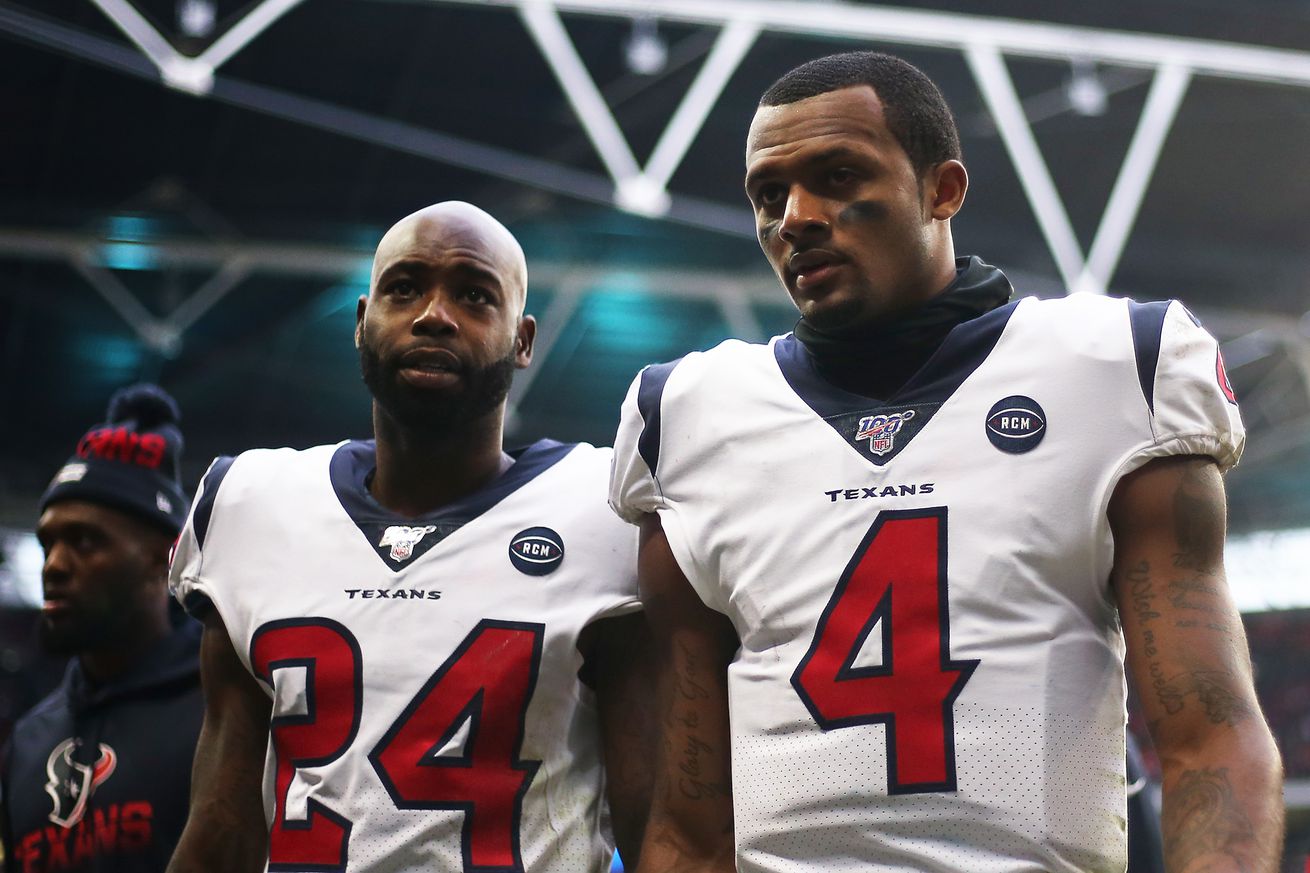 ESPN has some things to say about the Texans at the halfway point of the 2019 season.

Houston is 6-3 and in first place in the AFC South. The Colts lost to Ryan Fitzpatrick and the Dolphins after starting Brian Hoyer yesterday. The Titans took down the Chiefs in a super silly game. And the Jags, well, the Jags were off last week like the Texans. Jacksonville has their Super Bowl MVP coming back this week.

The first half of the season couldn’t realistically have gone much better for the Texans unless the Texans came out of the first half with J.J. Watt still intact. Other than that, it’s gone nearly perfectly. Houston has a fringe top ten offense. The run defense is still great. The pass defense will improve once their cornerbacks get healthy, and then, from there, Romeo Crennel will partake in the dark arts to conjure up a pass rush by doing wild things like blitzing Benardrick McKinney off the edge.

With the first half dead and gone, it’s time to take a look into the second half. Sarah Barshop with ESPN.com had the following to say:

The second half will be a success if: The Texans figure out how to replace the production of injured defensive end J.J. Watt, who tore his pectoral muscle in Week 8 and will miss the rest of the season. Although he had only four sacks, he led the NFL in quarterback hits and pressures, all while being double-teamed on 29.8% of his pass rushes as an edge rusher, the second-highest rate in the NFL when he got hurt. Two years ago, when Watt missed more than half the season on injured reserve, Houston had Jadeveon Clowney. Now, Houston’s only proven pass-rusher is Whitney Mercilus, who is going to get a lot more attention moving forward. — Sarah Barshop

You can read the rest of the article, along with the thoughts of the other NFL beat writers who work for ESPN, here if you need some Monday morning reading.

Now, I don’t think the Texans’ pass rush is the most important aspect of the second half. Not because the pass rush isn’t important; I just don’t see Houston being able to generate much of it at all. Sure, they had four sacks without Watt last time they played, but these were long. four second plus coverage sacks. I’m sure Brennan Scarlett’s PFF grade loved ‘em.

Unless D.J. Reader starts rushing the passer again and collapsing the interior, the Texans are going to have problems getting the rush going. There’s a skill issue there. There’s only so much Romeo Crennel can do. Dependable. Solid. These are the adjectives we’ll want to use to describe Houston’s defense.

The most important aspect from this point on for the Texans’ success is the offense. It’s going to be up to Deshaun Watson and Bill O’Brien to score 27+ points a game and then win some coin flips from there. The offense so far has relied heavily on play action, zone reads, and pick-and-pop play action. Without Will Fuller, Houston’s deep passing game has been neutralized except for a few Kenny Stills deep receptions. They’ll need more explosive passing plays to pick up points in chunks in the second half of the season. This offense works well when Houston has a lead, but when playing from behind and the clock ticking away, it can be burdensome. If the Texans can push the ball down the field, Houston will be a legitimate Super Bowl contender.

Football isn’t entirely about skill, talent, or performance; it’s also about who you play. The schedule played nicer for Houston than expected entering this season. Before the season began, the first nine games looked like an onslaught. The Texans had the second toughest projected schedule according to Football Outsiders. Then the Colts lost Andrew Luck. Nick Foles broke his collarbone. Cam Newton couldn’t throw straight. The Falcons fell apart. Patrick Mahomes was hobbled. Now, the Texans have played the eighth toughest schedule so far.

Houston has the eleventh toughest schedule from this point on. They’re about to hit their toughest three game stretch of the seasons: @ Baltimore Ravens, Indianapolis Colts at NRG Stadium on Thursday Night Football, and New England on Sunday Night Football. Then they’ll settle in for a December stretch against the Broncos in Houston, the Titans in Nashville, the Buccaneers in Tampa Bay, and the Titans in Houston. Three of those four teams rely on their run game. The Colts and Jaguars have easier schedules than the Texans, but after Houston swept Jacksonville and the Colts losing yesterday, with Jacoby Brissett’s timetable to return remaining unclear, it looks like Houston should be able to win the division. From this point on, Houston should be competing for a first round bye with Baltimore and New England. Best of all, the Texans have opportunities to set themselves up for a bye with head to head match-ups against each of those two teams.

That’s where the Texans are at the midway point. Let’s get on with it.