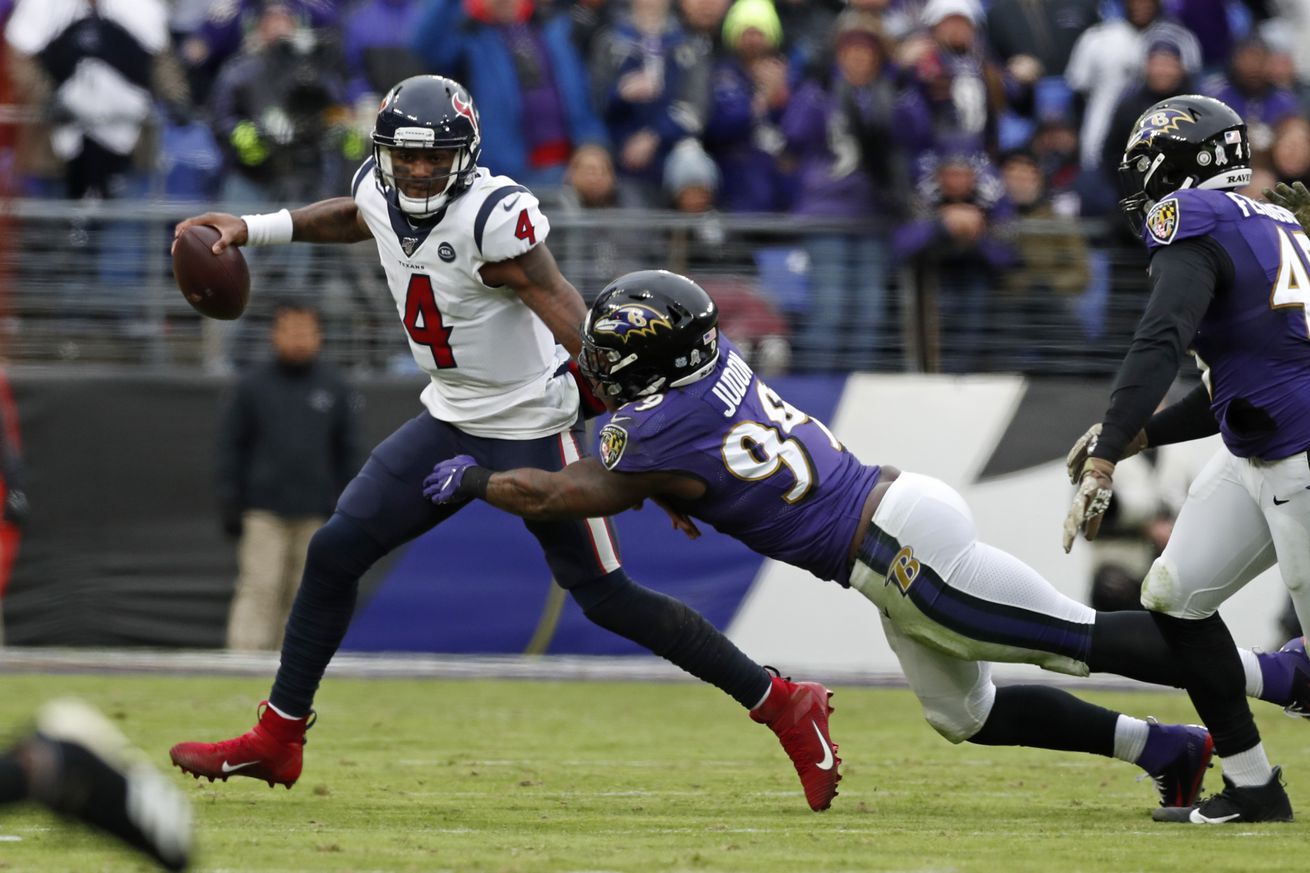 This one is a doozy.

I knew when I started writing this weekly column that a day of reckoning would come to pass. A day when the flood gates opened, and Deshaun Watson and I would both succumb to an onslaught of sacks. A plague of pass rushes would sweep across this franchise, leaving only breadcrumbs on my keyboard in the dead of night as I labor away, muckraking at the Texans’ offensive line. With every bull rush Watson took to his body, my carpel tunnel set in deeper.

It was a tragic day for the Texans last Sunday. Every time a glimmer of hope shines on this franchise, a colossal disaster to put them right back in their place occurs. The Texans are the middle child of the NFL.

The Ravens pressured the Texans’ offense in every way. Their plan was clear, their scheme complex, and their execution flawless. Their corners played tight bump-and-run coverage to not allow quick easy throws. Their constantly shifting and rotating front made it nearly impossible for the Texans to get into a rhythm. The Ravens looked like the T.C. Williams High School Titans from Remember the Titans as they were blitzing all night. At least four and usually five rushers were always pressing down on the Texans defense. Ravens’ defensive coordinator Don Martinadale drew up a masterful plan to utterly shut down a Texans’ offense that had two weeks to prepare for Baltimore.

The Ravens were truly playing chess while the Texans were stuck playing tic-tac-toe. For that reason, the sacks from this game are complex and require a holistic view into what the Ravens were doing both in the secondary and at the line of scrimmage. Coverage sacks occurred several times during the game when Watson had no one to throw to and instead chose to scramble. For the record, “coverage sacks,” a/k/a when the coverage is so good down the field and the blocking is good enough for a normal pass play to be completed, tend to fall on the quarterback. We can’t really blame the receivers for not getting open; that’s not the point of this article. It’s Watson’s job to get the ball out of harm’s way and live to play another down.

Before we close the book on last week and turn our attention to the Colts game tomorrow night, let’s take one long look at what transpired on Sunday and rack up some new data points on this week’s Sack Tracker.

It’s subtle, but look at the way the Ravens are moving before the ball is snapped. There are eight players who all are potential pass rushers lined up in the box. There’s no way this offensive line is capable of properly blocking this many players, yet they do pick up the blitz. There is great coverage downfield. The OL provides three seconds of quality pass blocking before Watson is taken down.

Watson instinctively drifts to his left as his first two reads are out—breaking routes down the field from Kenny Stills and Jordan Akins. When neither of those are open, Watson overreacts and dashes to his right, where he has more protection but zero pass options. If Watson stood in the pocket for half a second longer, he would have had DeAndre Hopkins over the middle for a 15 yard gain.

The end zone view shows how the Texans’ offensive line worked together and formed a 20 yard pocket for Watson to worm his way around. That is until all hell breaks loose.

The first sack of the game, which ended in Watson fumbling the ball, is awarded to Watson. He probably sees a lane between Fells and the tackle, but it was too far for him to make it back to the line of scrimmage without getting hit. Watson needs to chuck this ball 30 feet into the bleachers after five seconds of zig-zagging in the pocket; because he didn’t, he’s credited with the first sack of the game.

Sack #25: Both Watson and Scharping Hold Too Long

It’s the first play of the series, and the Texans start out with good field position after a miserable Ravens fake field goal attempt. Right out of the gate. the Texans squander all their good fortune. Watson’s first read on this play is D-Hop, who is being guarded by Marlon Humphrey. The CB does a fantastic job covering Hopkins and then jolting over to cover Carlos Hyde in the flat. Give him credit for creating enough time for the Ravens’ defense to get there.

Alright, now back to the linemen. Watch left guard Max Scharping’s (#74) feet. Particularly his right foot. See that false step he takes? He does this to get inside leverage on the defensive tackle, but it actually caused him to have less balance and a higher center of gravity. This enables the defensive tackle to work up the field and gain leverage on the rookie lineman.

Scharping picks up a double-whammy here. He gets called for a holding penalty and gives up a sack. A lose-lose situation is not going to look good in the film room at NRG.

Watson needs to thread this needle. He has the best receiver in the game sitting in a zone. It would be close, but an MVP-caliber QB makes this throw. Because we hold Watson to a higher standard and because he doesn’t choose to throw this ball away, he deserves half-credit for this sack.

The Texans run this play quite often, especially when Will Fuller is playing. Two post routes with a long out route across the middle. Having seen this play before, I can tell you that Keke Coutee does not run the right route here. Coutee is the near receiver and cuts across the field trailed by two Ravens. He should have tightroped down the 50-yard line instead of drifting upfield. He runs right into Hopkins’ route and muddles the entire play.

So we’ll give Coutee a half credit.

Laremy Tunsil is #78 and the left tackle on this play. I’d rather Tunsil take three steps back and make sure nothing else is coming from his left side then him triple team the damn nose guard. In what scheme could that possibly be the correct play? Scharping and Nick Martin are already engaged with the defensive lineman, and so why does Tunsil feel inclined to ruin an actual good block? I’m too upset we mortgaged the future to acquire Tunsil to be even remotely logical at this point. Maybe I’ll just take this one up with the Texans’ general manager.

The second Tunsil overcommits, Patrick Onwuasor takes the bait and pierces through the Texans’ pocket to sack Watson for the third time of the game.

This is actually a great defensive scheme. One of the outside linebackers is going to blitz and it’s predicated on which side Duke Johnson releases from out of the backfield. The Texans slide the protection to the right and bring Fells over to the left to seal off the edge. Johnson squeaks our of the backfield on a pretty miserable attempt at a wheel route. The delayed blitz from linebacker Onwuasor crushes Deshaun Watson, who has pass rushers on either side. Watson takes a half second too long to read the defense and absorbs a nasty shot to the body.

Sack #27: Tytus Howard Loses the Battle of the Rookies

I will bet you a DeAndre Hopkins designer handbag that the Texans were going to take Jaylon Ferguson (#45) with the 86th pick in the 2019 NFL Draft until the Ravens snatched him right before us. There’s no other reason why we took a shot in the dark at Kahale Warring; they were expecting Ferguson to be there.

The Ravens’ defensive front is in a pure hybrid-type, all-athletes set featuring the NCAA career sack leader, a safety, a defensive lineman who plays fullback, a linebacker/safety, and two outside linebackers next to each other. The Ravens are up by 14 and really having fun at the Texans’ expense here.

This time, watch rookie right tackle Tytus Howard (#71) on the left side of the screen. He takes a half stutter step as he is unsure if the guard to his left has to step down and block #42 or if he is taking on #36. This half-moment of hesitation is all Ferguson needs to pin his ears back and flush Watson out of the pocket.

Ferguson, in what may be the most impressive sack against the Texans all year, uses Howard’s body weight as a slingshot back into Watson as he tries to escape. Pure athleticism. Howard gave up this sack before he even looked at Ferguson. This is all on Howard.

Mark this down as the worst blocking of the season. After two incomplete passes due to immediate pressure, both Laremy Tunsil and Max Scharping are completely useless and let two Ravens defenders slip right by to sack Watson. This is offensive line coach fireable. I almost want to levy a full sack against both of them for this reprehensible play. Utter uselessness. Watch Watson, Martin, and Tunsil identify the corner blitz on the right side of your screen.

Didn’t see it? Here’s a screenshot of all three dudes pointing to the same player. So it’s not an issue of miscommunication; it’s a lack of adaptability once the play is live. Once again, its chess versus tic-tac-toe.

My best guess as to what happened is that when the corner did not blitz as expected, Tunsil was left stranded in no man’s land. I also believe Duke Johnson should have come across the formation to block if the corner blitzed, but that’s more of a caveat. When Scharping saw that Tunsil was out of position, his first reaction was to slide over and help. However, the second he did this, he forgot about his own man. Thus you have two untouched linemen heading straight for Watson’s head.

The game was well over by the time this sack occurred. Houston’s offensive lineman were getting beat play after play. The Ravens wanted to add one more sprinkle onto their Sunday sundae. This is a pure pad-the-stats call by Martindale. This is called a “twist”, where the defensive linemen on one side crash down and the other defensive end loops around to fill their gaps.

When you’ve got an offensive line completely confused, guessing, and running a basic protection call, this is the type of shenanigans defensive coordinators call up. It’s the change-up pitch for the defensive lineman.

Center Nick Martin does not set his feet and launches at the roving #54 Tyus Bowser. He went from a supporting role next to Scharping to enveloped by Bowser in a blink of an eye. Unfortunately for Martin, there isn’t a receiver to blame for this and therefore he receives the full blame for this sack.

Officially there were seven sacks on the day, but if you look at this play, which was technically called a sack, Watson makes it past the line of scrimmage. For the sake of the bags under my eyes and to focus more on the other, more meaningful sacks, we’ll let this one slide for Watson and the offensive line.

Hey-o! We’ve got a new “Sack-rificial Lamm” and it’s none other than our NFL MVP QB Deshaun Watson. Good ol’ Greg Mancz can finally sleep peacefully knowing that he is the backup and no longer leads the team in allowed sacks. And a hearty welcome to the Sack Tracker for our first wide receiver—Keke Coutee!