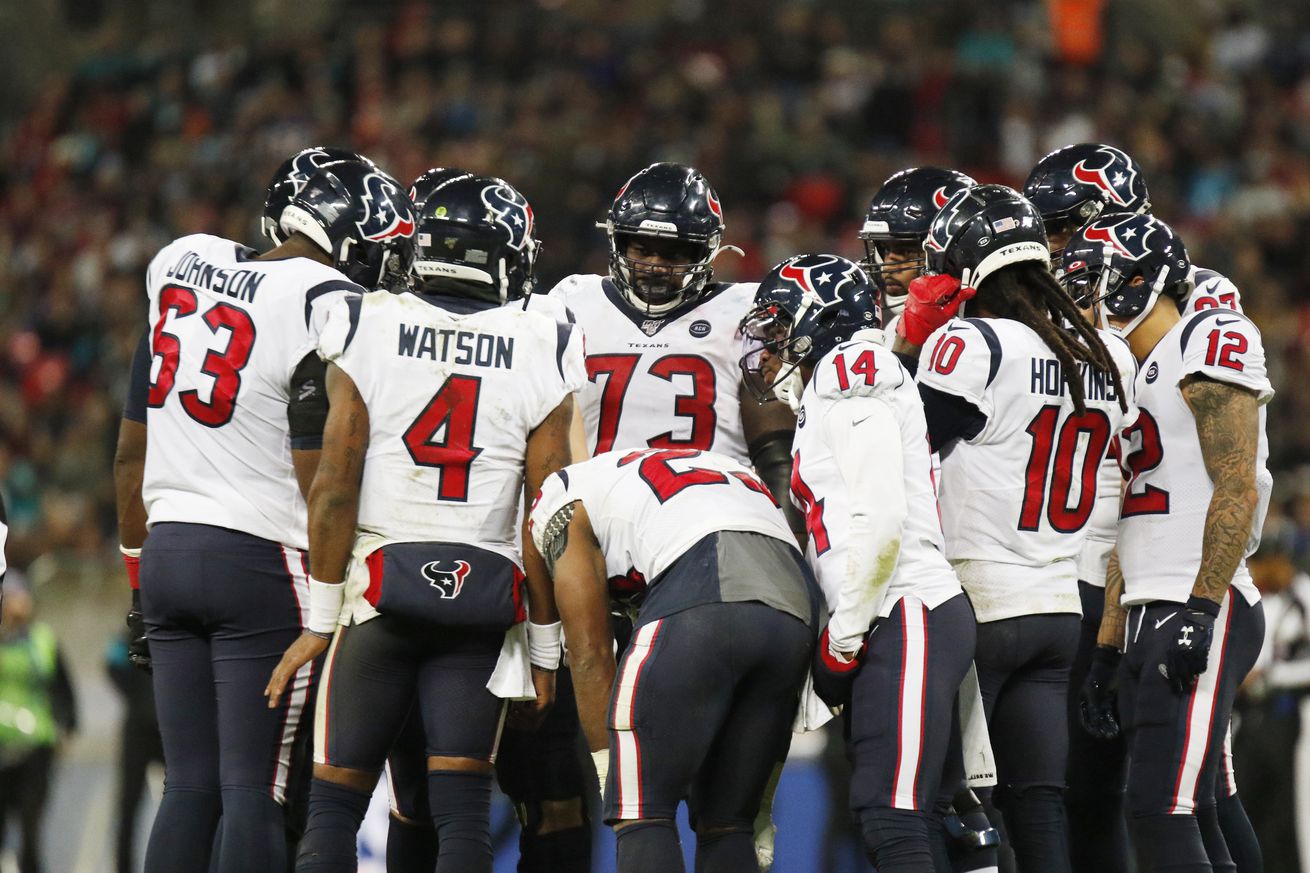 With so much to write and talk about after every game, and not enough time for one person to write about it all, the Masthead joins together and writes about the Texans’ semester abroad.

Saw the pant legs off these dungarees, cowboy. If I could grow a mustache, it would bunny hop suburban curbs until I flipped over the top. I’d then have it removed from my guts after a marathon surgery, aviator glasses pulled out of shoe boxes in the closet labeled “Middle school memories,” and all of a sudden, Jacksonville’s denizens looks like managers of Italian restaurants. Musty. Stinky. Minshew.

It’s impossible to fault Minshew for the rest of it, though. With mature natural Johnathan Joseph on the outside, second start Gareon Conley on the other, Justin Reid in the slot, and Mike Adams and Jahleel Addae composing two safeties deep, the Jaguars rarely pushed the ball downfield. They tried to establish the run. It didn’t work. It never does. Most of Minshew’s throws were out to the flat. Incomplete and ineffective short crossing routes. This isn’t Minshew Mania. Throw it deep. Attack the sidelines. Split the old safeties. That is Minshew Mania.

D.J. Chark, Chris Conley, and Keelan Cole, the 8th ranked passing offense by DVOA, and a passing offense that has been great throwing downfield didn’t do throw the ball downfield. Sure, rekindled Dede Westbrook was hurt. But hell, he ain’t that good. I’m not waiting 30 minutes for a table at Jim’s after church, and I’m not derailing my passing offense just because King Dede ain’t here.

There isn’t a valuable footballfootballfootball reason. I close my eyes. I hear the gobble of turkeys in the pasture become bloody hollers. Morning dew coagulated with fowl blood. This time, I’m thankful Bill O’Brien is coaching MY football team, instead of his bestest Georgia Tech buddy.

No. The only reason for this that makes any logical sense, and it really isn’t even logical, is that the Jaguars wanted to declaw Minshew, grind down his canines, and put him in an ineffective offensive situation so they could move on to Nick Foles without rampant repercussions. Remember him? Nick Foles, after handing out bracelets and tooth paste last week has almost escaped the manger, providing slightly above average quarterback play. Then the Jaguars could find some quarterback starved team, like Denver or Miami, re-wrap him in plastic, grease his nobs, squirt his eye glasses, refurbish, and repack him. From there, they could build around the most valuable recourse available—the rookie quarterback contract.

Everything I was interested in entering this game wasn’t on his display. Yes, I know Deshaun Watson can whisper adavacado, a millennial death curse, and evaporate away from Josh Allen, the second best Josh Allen, Yannick Ngakoue, Calais Campbell, Taven Bryan, and anyone else. Read-pass options turn the football field into a two on one fast break that brutalizes teams with wading and moaning zombie linebackers. Egregious run fits. It’s easy to run the football.

No, what I was interested in, what I wanted to see, was the deep passing play action game, and how this J.J. Wattless pass rush would deal with a great passing attack. This wasn’t on display. Jacksonville’s game plan gelded Minshew Mania. It was short, ineffective, and boring. On the rare occasions the Jaguars did throw the ball down the field, Gareon Conley would play the ball like Shareece Wright after getting beat last season.

Bye week. Bitter dreams. We’ll see this soon. Give it two weeks. Or maybe not. The Weather Channel is playing an ad with the Earth on fire like an album of the year cover. 2020: Race To Save the Planet. We may not make it. I guess the Laremy Tunsil trade was good. That settles it.

JACKSONVILLE, WHAT ARE YOU DOING?

Ultimately, the difference between the Glitter Kitties and the Texans is that one team has Deshaun Watson and the other team doesn’t.

Doug Marrone is a poor man’s Bill O’Brien, and that’s been readily apparent in both match-ups against the Jaguars this year. The way to beat the Texans’ banged up defense is to push the ball down the field, but the Jaguars were unbelievably content with not doing this. Getting Leonard Fournette in space against the much smaller Texans’ defensive backs would have been good things. Marrone tried to do both of these things far too late in the game to be effective.

Defensively, Romeo Crennel and the players put in one kitten of an effort. It was a throwback to RAC’s bend but don’t break style of defense, and he threw in the occasional blitz. The pass rush wasn’t overly effective until the turnover-fest in the 4th quarter, but it was just enough to keep Minshew uncomfortable.

Bill O’Brien called a great game today. Until the 4th quarter and the flurry of turnovers, it looked like he would again manage to keep the NFL MVP Deshaun Watson under 20 points. BOB, of course, is the only coach in the NFL consistently capable of keeping Watson under wraps.

DAMMIT, DON YOU DID IT AGAIN.

This could be a massive week for the Texans in the division. Texans beat the Jags who were 4-4. The Titans look vulnerable and were stomped by Carolina. The Colts lost with Brian Hoyer at QB. I love that Houston is entering the bye with the division lead.

The most difficult portion of the Texans’ schedule is coming up and we have an extra week to prepare. Watson has this offense churning. 25+ points per game has become commonplace, which is something I thought I’d never say. Interestingly enough, with all the weapons the Texans have, the offense is very compact. By that I mean everyone is bunched together. They are looking for minute mistakes by the defense to exploit for 8 yards. Limit the turnovers, control the game, and spread the love. It’s especially effective when DeAndre Hopkins is in fact split far outside because he forces the defense to be over-adjust.

Not that this game was a must-win; it was more of a “can’t lose”. Next week is the same. A win against the Ravens gives us head-to-head advantage against both the AFC East and West.

The Texans did what they are supposed to do today. They are clearly a better team than the Jaguars. Great play calling on both sides of the ball. We didn’t have our best offensive linemen in Laremy Tunsil, and though they need to clean up the seven QB hits (why is Chris Clark in the NFL, seriously), the offensive line still allowed one sack along with making way 216 rushing yards and a TD. Though it should’ve been three rushing TDs had Hyde held on to the ball, and I still don’t know how that Jumpman Watson scramble wasn’t a TD.

The Texans got a crucial win before the bye in a close AFC South race. We are still waiting for the returns of Will Fuller, Bradley Roby, Tashaun Gipson, Lonnie Johnson Jr., and Tunsil. This team will be even stronger when they all return, and I think we will have enough to win the division.

Will Keke Coutee ever get out of BOB’s doghouse? I get he dropped the pass that led to the game losing interception against the Colts, but he is simply better than DeAndre Carter and Steven Mitchell. The offense flows better when Coutee is in the game.

Overall, great win today. Let’s get healthy during the bye and secure another division title. I’m excited to see this team battle the elite AFC teams in Baltimore and New England. Go Texans!

Today sucked but at least the #Titans are still last in the AFC South! pic.twitter.com/NH08fcmYyf

If you’re a fan of the #Titans, I don’t see how you are not totally demoralized right now.

What a great way to head into a bye week. Deshaun Watson proved to the world he really is a wizard with the football, Carlos Hyde showed everyone he’s got his mojo back (seriously, why did we keep Alfred Blue and not go after Hyde years ago?) and Romeo Crennel provided more proof he’s a rookie QB killer.

Now, if the Texans can take the next 10 days to heal up, having Deshaun Watson and Lamar Jackson go toe-to-toe in two weeks should be a showcase of the new breed of NFL quarterbacks.

GOTTA GET THAT GROUND GAME GOING.

You know what gives me hope? Doug Marrone apparently thinking the #Jaguars have to establish the run despite the #Texans having zero pass rush and a secondary that prominently features a bunch of street free agents and practice squad players.

Life is just establishing the run until you die anyways

There shouldn’t be too much to complain about with this win. The Texans are a good team, not an elite or great one. The Jaguars are bad. The Texans had a ton of not just injuries, but key injuries. The Jaguars can get after the quarterback. Despite all of this, the Texans’ defense dominated and Deshaun Watson did what he always does. The offensive line had issues, but it wasn’t a complete disaster like it appeared was possible on paper. I mean, Chris Clark started at left tackle, yet Watson is still alive and won’t have to take a paddle boat back to Houston, so we good.

Carlos Hyde continues to surprise and Keke Coutee continues to be a ghost. Kenny Stills has been a significant addition to this team, and Bill O’Brien actually had some nice moments as the play-caller today.

All of that said – the Texans are fortunate they were playing the Jags today and have a week off after, because this squad against even a mediocre team I think would have been quite a different game experience for all of us.