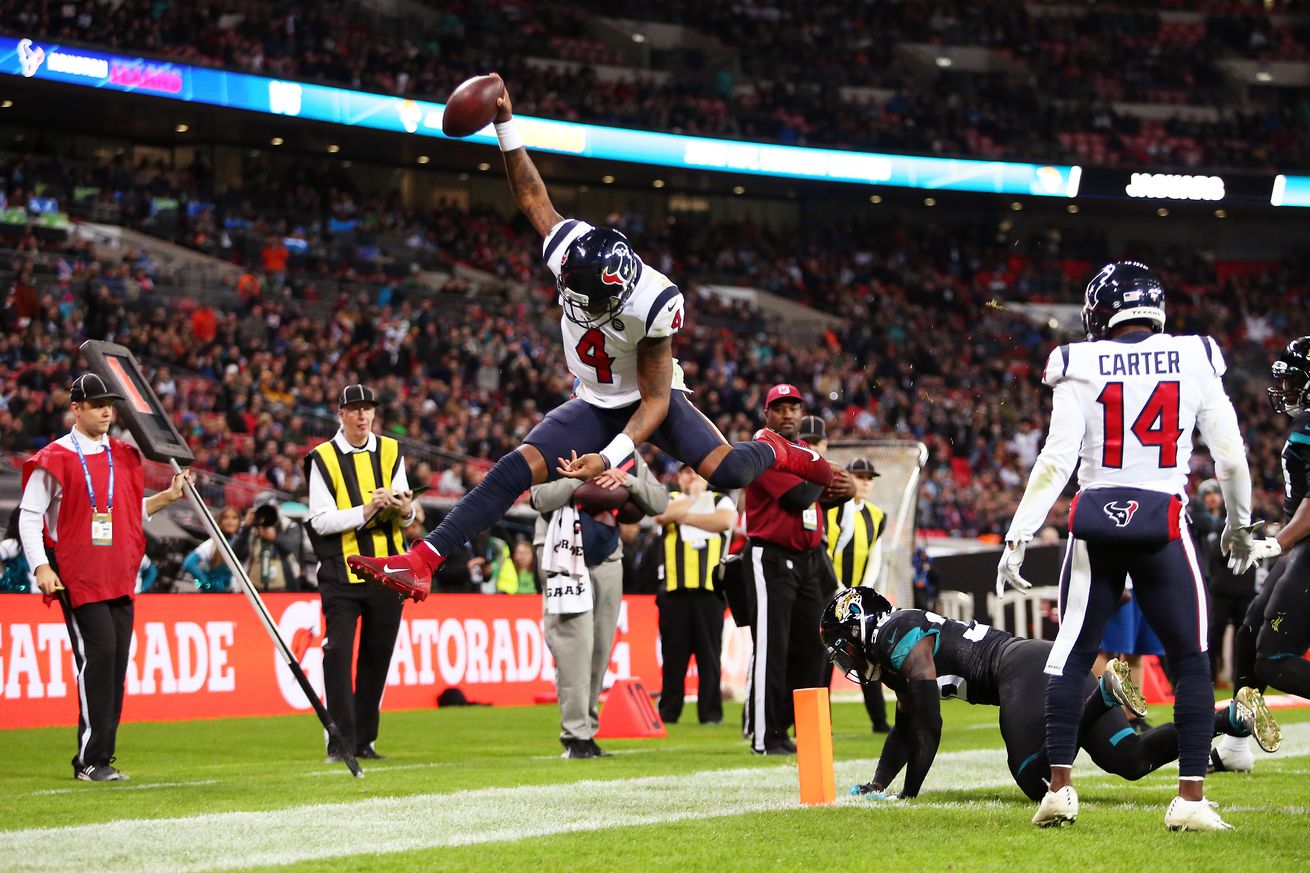 The Texans Get A Rest

The Texans have a well-earned bye week during Week 10. Even without a game there is plenty to talk about. The main discussion at this point in the season is where the Texans rank among the AFC elite.

Let’s start with the AFC South. At this point, the Texans should be able to run away with the division. The Colts are in second place and have a deep roster, but if Jacoby Brissett misses any significant time, they could find themselves spiraling. I actually think the Colts have the better all-around team than the Texans, but Houston has Deshaun Watson and he’s made it his personal mission to mask their weaknesses week in and week out. It should be more than enough to help the Texans secure the division.

Within the AFC as a whole, I think the Texans are either the third or fourth best team. The Patriots and Chiefs are going to prove to be the best teams throughout the course of the season. I’m well aware that the Texans beat the Chiefs a few short weeks ago, but Patrick Mahomes was hobbled in that game. The Texans shouldn’t put their hope in the dream that Mahomes is less than 100% if they meet again. The Patriots are better than the Texans right now, yet the Texans should be able to offer a fun, competitive game when they meet in December.

That leaves the Ravens, who just happen to be the Texans next opponent when they come back from their break. I truly believe this is a toss-up with how both teams are playing right now. Label them 3A/3B and pick which one you think is worthy of the “A” designation. Lamar Jackson is playing out of his mind right now, but there are legitimate questions regarding how long he can stay healthy with his playing style. I think the Ravens have the better full team (especially since they have corners who can cover) so they get the 3A ranking.

Don’t be too bummed Texan fans. I have them as the 3B or 4th best team in the AFC at the moment but with Deshaun Watson leading the team, they can beat any opponent on any week. Lack of depth may eventually kill this team off but for the moment let’s enjoy the magic show DW4 is putting on each week!

Anytime the Patriots lose, I automatically start the week in a better mood. Lamar Jackson is playing out of his mind right now and the Patriots paid the price. Yes, yes, Bill Belichick will probably course correct and have the Pats defense ready to beat the Ravens into submission come playoff time but let’s enjoy this one while we can.

(Scape)GOAT of the Week: Adam Vinatieri

Vinatieri is going to receive all the blame for missing the kick that cost the Colts a chance to beat the Steelers. While the laces were definitely not out on his attempt, he has to find a way to make the kick or at least make the miss more dramatic. Vinatieri is a no-doubt Hall of Fame kicker but this season he is 12/17 on attempts and the bell now tolls for him at a quickened pace. I’ve always wondered if Peyton Manning would have considered him an “idiot kicker.”

The laces were not out on Adam Vinatieri’s missed game-winning field goal pic.twitter.com/IXzq2pxOYG

When you lose to a team that is actively tanking something has gone horribly wrong. Adam Gase looks in way over his head. Sam Darnold must have gotten mono from the kiss of death cause he looks like a walking corpse out on the field. At least he knows there is an afterlife, with all that ghost seeing after all. I bet the Jets are regretting buying into their own hype and pretending they had a shot at the playoffs this year. It’s so bad that I can’t even find any highlights of their game against the Dolphins on Twitter. Serious question: Will Jamal Adams even be on the roster next season?

Do yourself a favor and listen to this call from Kevin Harlan. Sometimes it’s the little things in life.

Kevin Harlon’s call of the black cat on the field is amazing pic.twitter.com/77XAC1w2tz