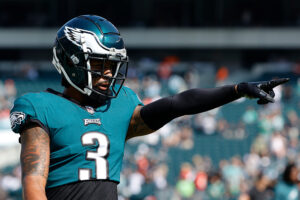 NFL cornerback Steven Nelson has signed a new contract with the Houston Texans worth $10-million over two years. Nelson spent the 2021 season with the Philadelphia Eagles, after spending the two prior seasons with the Pittsburgh Steelers.

The Texans are signing cornerback Steven Nelson to a two-year, $10-million deal, per source. Houston gets a starting corner before the draft.

Steven Nelson signed a one-year, $2.5 million contract prior to the 2021 season. Thankfully for the Eagles, the contract wasn’t a big one, because Nelson didn’t have a great year. After one elite season with the Steelers and another decent one, Nelson allowed a 66.7% completion percentage and a 108.4 passer rating against, both career-worst marks since Pro Football Reference began tracking the stats in 2018. His five touchdowns allowed were two less than 2020, but his yards per target against was a career high at 8.0. Overall, it’s fair to call Nelson’s 2021 campaign a disappointing one.

In the 2019 season with the Steelers, Nelson was an elite cornerback. He was an underrated but crucial part of what was one of the best defenses in the NFL. That year, Nelson allowed just a 50% completion percentage and a 65.8 passer rating, both career-best marks by a long shot. He was targeted 74 times and didn’t allow a touchdown, a very impressive accolade. 2020 wasn’t as good of a season for Nelson, as he allowed a career-worst seven passing touchdowns and a passer rating of 97.0. The step back that Nelson took in 2020 was the reason that Pittsburgh didn’t want to sign Nelson to a long-term extension, which ultimately resulted in his departure from the franchise.

Prior to his time in Pittsburgh, Nelson spent the first four years of his career with the Kansas City Chiefs, who drafted him in the third round of the 2015 NFL Draft. Though never an elite cornerback, Nelson showed potential and at times was the best member of an otherwise abysmal Chiefs secondary. Nelson is a durable player, too, as he has played in at least 15 games in five of his seven NFL seasons so far.