Eight days away from this year’s trade deadline, two AFC teams have struck a deal. The Raiders agreed to send cornerback Gareon Conley to the Texans in exchange for a third-round pick, according to Vic Tafur of The Athletic (on Twitter). 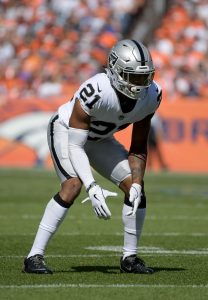 Conley has started every Raiders game this season and will head to a Texans team dealing with injuries at corner. The 2017 first-round pick is signed through the 2020 season and can be controlled through 2021 via fifth-year option. The Ohio State product has started 20 games over the past two seasons, shaking off an injury-marred rookie slate.

And just like the Broncos did when they traded Demaryius Thomas to the Texans last season, the Raiders will see Conley again soon. The Raiders will be in Houston for a Week 8 Texans matchup Sunday.

This marks yet another high 2020 pick the Texans have surrendered, with the Houston Chronicle’s John McClain reporting (via Twitter) it’s a 2020 third. The Texans owned the Seahawks’ 2020 third-rounder from the Jadeveon Clowney deal and will send that selection to the Raiders. The Texans traded their 2020 first-rounder in the Laremy Tunsil deal and are likely to send a third-rounder to the Browns for Duke Johnson. Overall, Houston has traded five 2020 or ’21 Day 1 or Day 2 picks since August.

This would stand to leave Houston with only its second-rounder on Days 1-2 of next year’s draft, further committing the current GM-less team to a hopeful deep 2019 playoff run.

This marks an interesting deal between two teams contending in the AFC. Although the Raiders did not fare well in Green Bay on Sunday, they remain 3-3. They have struggled in pass defense this season, with Aaron Rodgers‘ historic day being the most recent such reminder. Oakland also added two corners in this year’s draft — second-rounder Trayvon Mullen and fourth-rounder Isaiah Johnson — and signed Nevin Lawson. Lamarcus Joyner has also worked in the slot as a Raider. Johnson is expected to make his debut soon, and this transaction figures to mean more Mullen snaps going forward.

The Texans have lost Bradley Roby, also an Ohio State-produced first-rounder, and on Sunday saw veteran Johnathan Joseph carted off the field Sunday. They drafted Lonnie Johnson in Round 2, but he has graded as Pro Football Focus’ second-worst cornerback this season. The Texans also placed Phillip Gaines on IR on Monday. The 4-3 team will add Conley to the mix, and he should be set to contribute immediately. PFF has Conley slotted as this year’s No. 82 overall corner. He has four career interceptions, one of which coming this season.

Conley, 24, represents yet another Reggie McKenzie-era first-rounder the Jon Gruden regime has jettisoned. Gruden shipped out Khalil Mack and Amari Cooper in trades last season and has now dealt away McKenzie’s final first-round pick as Raiders GM. Karl Joseph is the last remaining McKenzie first-rounder on the Raiders’ roster.