There’s still time between now and Tuesday’s deadline for trades, but the Texans are done making moves. At least, that’s what head coach Bill O’Brien says (Twitter link via Aaron Reiss of The Athletic). 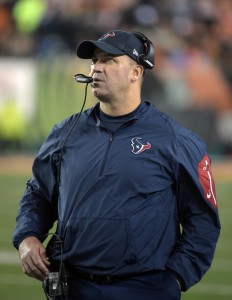 The chances of a transaction happening today (Monday) are “slim to none,” O’Brien says. Presumably, the same thinking applies to Tuesday, up until the 4pm ET/3pm CT deadline.

The Texans, it seems, got their heavy lifting done last week when they acquired cornerback Gareon Conley from the Raiders. Beyond that, they are apparently content, even though star defensive end J.J. Watt has been shut down for the year.

If the Texans wanted to, they could explore trades for defensive ends like Derek Wolfe (Broncos), Solomon Thomas (49ers), Carlos Dunlap (Bengals), or even Jets star Leonard Williams. The Texans’ choice, if O’Brien is to be believed: none of the above.

After Sunday’s 27-24 win over the Raiders, the Texans are now 5-3, putting them just behind the 5-2 Colts in the AFC South. The historically wide-open division is very much in reach and they can distance themselves further from the pack on Sunday when they face the Jaguars in London.