The Texans will meet with cornerback E.J. Gaines on Tuesday afternoon, Ian Rapoport of NFL.com (on Twitter) hears. Gaines, who has 38 starts to his credit, is finally healthy and ready to play. 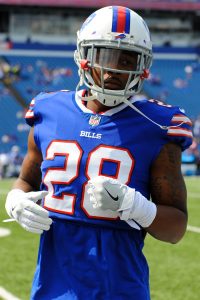 Gaines returned to the Bills for a second stint in March with a one-year, $2.1MM deal, but his Buffalo return didn’t work out. In August, they were forced to place him on IR with a groin injury.

He started 11 games with the 2017 Bills and was a first-stringer in the team’s wild-card game. Gaines signed with the Browns last season but only played in six games, landing on IR there as well. For his career, the 27-year-old has made 38 career starts. The majority of those starts (25) came with the Rams.

The Texans just recently bolstered their CB group by trading a third-round choice to the Raiders for Gareon Conley. Conley is there to help fill the void left by Bradley Roby and Phillip Gaines’ injuries. The team may also be in store for and a lengthy Johnathan Joseph absence, so a vet like E.J. Gaines would be valuable.

Worth noting: The Texans also showed interest in Gaines during the 2018 offseason, before he signed with the Browns.