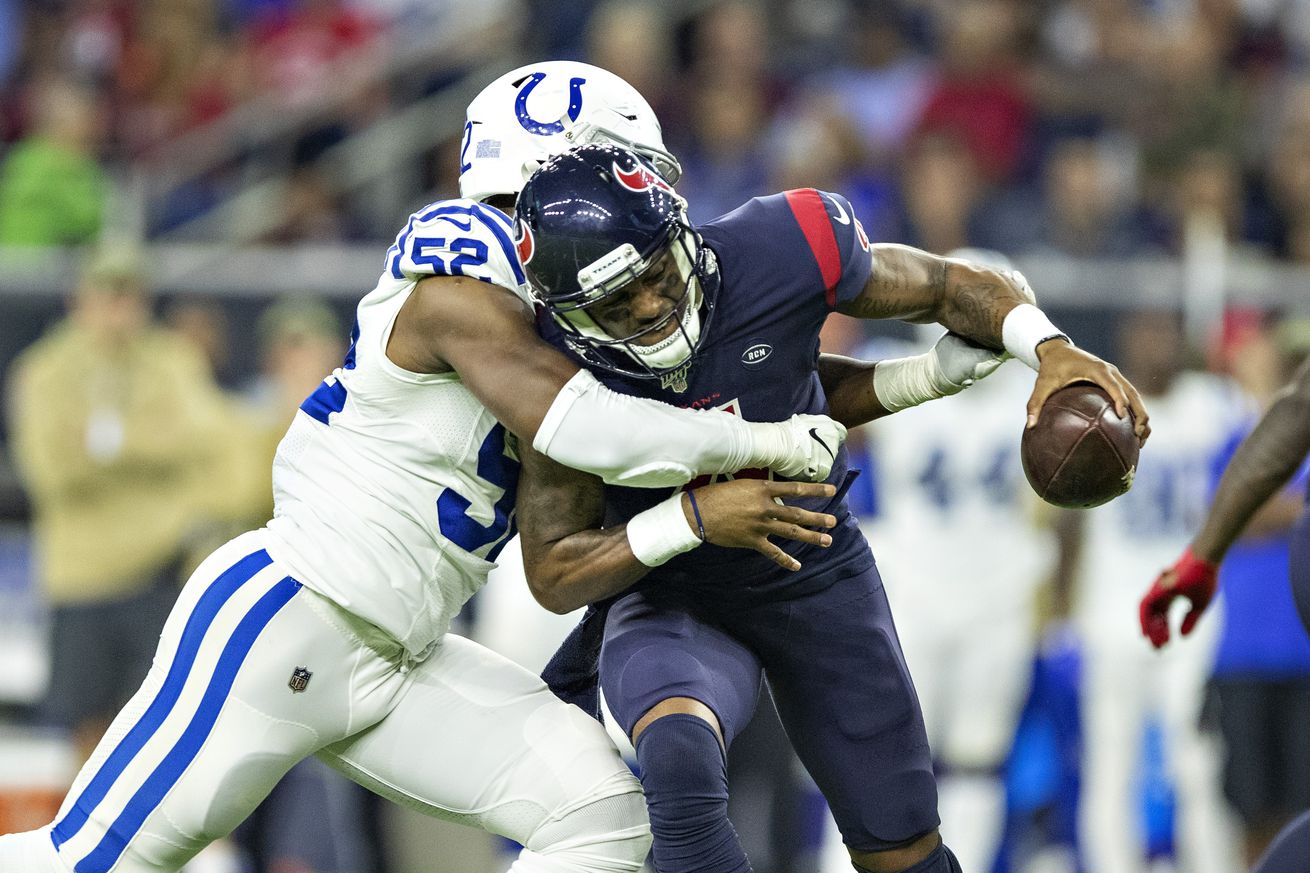 Add one more to the total tally.

Hello again and welcome to the Texans Sack Tracker for our Week 12 matchup against the Indianapolis Colts. For those of you who read this column last week, the Texans’ offensive line struggled amid an unrelenting barrage of pressure from the Baltimore Ravens. The Colts must not have watched the tape from that game because they rarely blitzed the Texans. Being able to apply pressure with only four pass rushers is a part of the Colts’ strategy, but through almost three quarters of football they had done little to nothing to disrupt Deshaun Watson.

In a fairly fast moving game, the Texans limited the opportunities for Watson to get sacked. Of the 30 pass attempts he had, only eight went past 15 yards. Though two of those were his only touchdowns on the day, the Texans operated under a very Texans-esque game plan.

After the three sacks given up against the Colts in Week 7, the offensive line had a lot to prove on Thursday. Rookie right tackle Tytus Howard was the only addition to Thursday’s offensive line from the squad that suited up against the Colts earlier in the year. Howard had a couple of hiccups here and there, but for the most part Denico Autry and Ben Banogu were held in check by the rookie tackle.

There was one play, however, where Ben Banogu did get the better of Howard.

The Texans are on the move and looking to even the score on 2nd and 11 deep in Colts territory. Watson is alone in an empty backfield with only four pass rushers on the field. Rookie DE Banogu is lined up in a wide-9, which means he is outside the tight end, on the left side of the screen. He is about to record the ceremonial first sack of his career.

Because he is so far away from the quarterback, Banogu is able to generate a ton of power before he runs into Howard. He does a great job of setting Howard up by disguising what he wants to do until the very last moment. Howard does a poor job of transferring his weight from his hips to his thighs (lowering his center of gravity) when absorbing the impact. Though Howard lets Banogu get good positioning, he himself is not all that lost due to his quick recovery. Look at this image below and the symmetry between the sides of the offensive line.

Both Howard and Tunsil have their hips perpendicular to their opponents and their feet mirroring the pass rushers. Then look how both guards Zach Fulton and Max Scharping peer back to see how their neighboring tackle is doing. Unfortunately, #73 Fulton decides to stay put, while #74 Scharping decides to go help out. If this were the other way, we probably would not have a sack on this play. Without help, Howard loses control of Banogu and allows a sack to occur.

But wait, go back up to the play. Watson gets happy feet in the pocket and decides to squirm out before it collapses on him. If Watson stood in the pocket for a moment longer, he would have noticed the soft underbelly of the Colts zone that Kenny Stills found on the right side. Here’s the wide-angle view of the play.

The Colts are in a Cover 4 look with one secondary player covering each deep quarter of the field and four players underneath covering the short zones. As you can see, Watson doesn’t have many open options, but if he decided to stay in the pocket against only a three person pass rush, he would have eventually found either Stills or Fuller on the right side.

After assessing the damage, both Watson and Howard receive half a sack for their roles in the only sack allowed in the Colts game. With that, Watson retains his title of the “Sack-rificial Lamm” another week while Howard climbs further up the list.