Several days after agreeing to terms with No. 3 overall pick Derek Stingley Jr., the Texans have signed the second of their two first-round choices in 2022. Per Aaron Wilson of Pro Football Network, Houston has inked No. 15 overall selection Kenyon Green to his rookie deal. 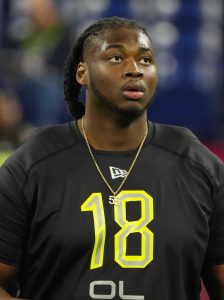 It will be a four-year, $15.9MM pact for Green, all of which is fully-guaranteed. Of course, the contract will also come with a fifth-year option.

Green, a Texas A&M product, was widely seen as the top guard in the draft, and he was indeed the first guard off the board. Said Houston GM Nick Caserio, “[h]e’s been a really productive, consistent player. He played tackle. He played guard. I would say he is probably a better guard than he is a tackle. I think he is probably more of an inside player, but we’ll put him in the mix. Local kid, so I’m sure all of the Texans, fellow Texans, will be happy about that.”

Green was an All-SEC Freshman performer at right guard for the Aggies in 2019, then became the full-time starter at left guard in 2020. As Caserio noted, Green spent time at several positions along the O-line in 2021: two games at right tackle, one game at left tackle, two games at right guard, and seven games at left guard. He presently projects as the Texans’ starting left guard, and his presence should be a boon for second-year QB Davis Mills and new running backs Marlon Mack and Dameon Pierce.

The 6-4, 323-pounder was a finalist for the Lombardi Award in 2021, given to the nation’s top collegiate O-lineman. As one AFC scout told Lance Zierlein of NFL.com before the draft, “[m]ost of his bad reps were when he was playing tackle this year, when guys were hurt. His guard tape is first round for me.”