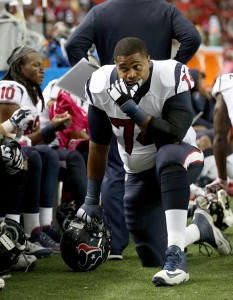 Clark should be familiar with Houston, as he played from the Texans from 2015-17, starting 37 games during that time. Last season, the now-34-year-old Clark didn’t land a contact until the regular season was already underway, but ended up starting 15 games for the Panthers.

It’s unclear if Clark will be immediately called upon to start for Houston this time around. Incumbent right tackle Tytus Howard went down with a knee injury in Week 6 and will miss time, but he’s expected to return at some point this year. Clark, fellow new signee Dan Skipper, and Roderick Johnson all represent options to play on the right side of the Texans’ offensive line.

Henderson, 27, re-signed with Houston this offseason on a one-year, $1.5MM deal. He began the 2019 campaign as the Texans’ starting right tackle, but was benched after Week 1. Henderson is now dealing with a back injury, tweets Wilson, one that likely occurred away from the football field given that he was placed on NFI.