The Texans didn’t add much to their defensive line during the draft, but they are set to bring in another piece to that position group in free agency. Houston is signing defensive end Rasheem Green to a one-year deal, per NFL Network’s Ian Rapoport (Twitter link). 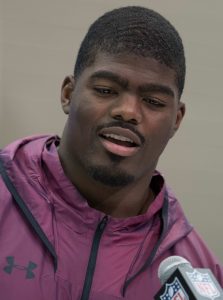 Green, 25 at the start of the season, visited the Texans last week, so a contract comes as little surprise. He had a limited role during the first three years of his time in Seattle, though he flashed potential with a four sack 2019 campaign. By far his best year, however, came in 2021; he set career highs in starts (16), sacks (6.5), tackles (48) and quarterback hits (15).

That generated plenty of interest as he hit free agency for the first time. The USC product met with the Ravens in March, and the Panthers in April. While that signalled a departure was likely, it was reported at the time that he could still re-sign with the Seahawks. Ultimately, the third meeting was the charm for him to find his new NFL home.

In Houston, Green will join a defensive front which – like most of the rest of the roster – is lacking in veterans and long-term, expensive commitments. If he can replicate his level of play from last season, however, he should be able to continue his upward trajectory and help the team’s rebuild.