DaeSean Hamilton‘s rough run of injury luck will result in a second team waiving him with an injury designation. The Texans jettisoned the former Broncos draft pick Wednesday, Field Yates of ESPN.com tweets. 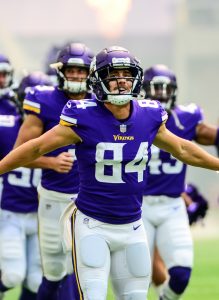 To fill Hamilton’s spot, Houston is signing wideout Chad Beebe. The second-generation NFLer made some contributions for the 2020 Vikings, working as the team’s No. 3 wideout behind Justin Jefferson and Adam Thielen. But Beebe suffered a preseason injury and did not play last season.

This represents another tough break for Hamilton, who suffered a non-contact knee injury in practice this week. This injury is not an ACL tear, however, and it is not expected to sideline the Penn State product for the season. It will leave Hamilton without a job, though. Hamilton is attempting to come off a missed 2021 season. The young slot receiver suffered an ACL tear during the 2021 offseason, and the Broncos — who were on the verge of trading Hamilton to the 49ers — cut bait soon after. The Texans picked him up earlier this year.

If unclaimed, Hamilton will revert to the Texans’ IR list. An injury settlement, which would send the three-year veteran to free agency, could follow in that case. Beebe caught 20 passes for 201 yards and two touchdowns for the Vikings two years ago. A foot injury sidelined him in 2021.

Beebe, 28, would represent a fringe candidate to make Houston’s roster as a backup while also posing as a practice squad candidate. The team may have more room on its Week 1 roster, however, with second-round pick John Metchie not expected to be ready from the ACL tear he suffered late in Alabama’s season. The Texans roster the likes of Chris Conley, 2021 third-rounder Nico Collins, Chris Moore and Phillip Dorsett as auxiliary options behind Brandin Cooks.