The Texans have been banged up on the offensive line recently, and are apparently exploring the veteran free agent market. Houston worked out former first-round pick Joshua Garnett Friday, according to Aaron Wilson of the Houston Chronicle (Twitter link). 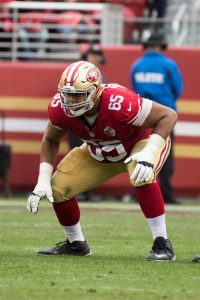 Wilson notes that Garnett wasn’t immediately signed to a contract. The 49ers drafted the guard 28th overall out of Stanford back in 2016. After starting 11 games as a rookie, he missed the entire 2017 season after undergoing knee surgery. He failed to win a starting job last season, and was hurt for most of the year. After declining his fifth-year option, the 49ers then waived him at final cuts this past training camp.

Garnett is still only 25 and has been the victim of some bad injury luck, so it’s a bit surprising he hasn’t been able to resurface yet. He also worked out for the Seahawks and Titans back in September, but nothing materialized.