Could Kenneth Dixon resurface soon? The running back had a workout with the Texans this week, a source told Aaron Wilson of the Houston Chronicle. 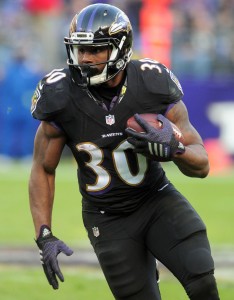 Dixon was originally drafted by the Ravens as a fourth-round pick back in 2016, and he received a ton of buzz early on in his career. He showed plenty of flashes as a rookie and many thought he would soon take over as Baltimore’s lead back, before injuries and off-field issues derailed his progress. He was suspended for the first four games of the 2017 season due to a PED violation, and then suffered a torn meniscus which knocked him out for the season. Last season he went down with a knee injury, and was placed on injured reserve.

He was activated late in the year, and ended up finishing with a very solid 333 yards in only six games while averaging 5.6 yards per attempt. Unfortunately he couldn’t carry the momentum over into 2019, as he suffered yet another knee injury during the preseason. After fracturing his kneecap, the Ravens released him with an injury settlement. He’s apparently healthy now, and he worked out for the Jets last week.

The Texans’ ground game has been surprisingly strong with Carlos Hyde leading the way, but they apparently aren’t completely satisfied. Dixon is still only 25, so he could make sense as a flyer to keep around for the 2020 offseason and potentially beyond.