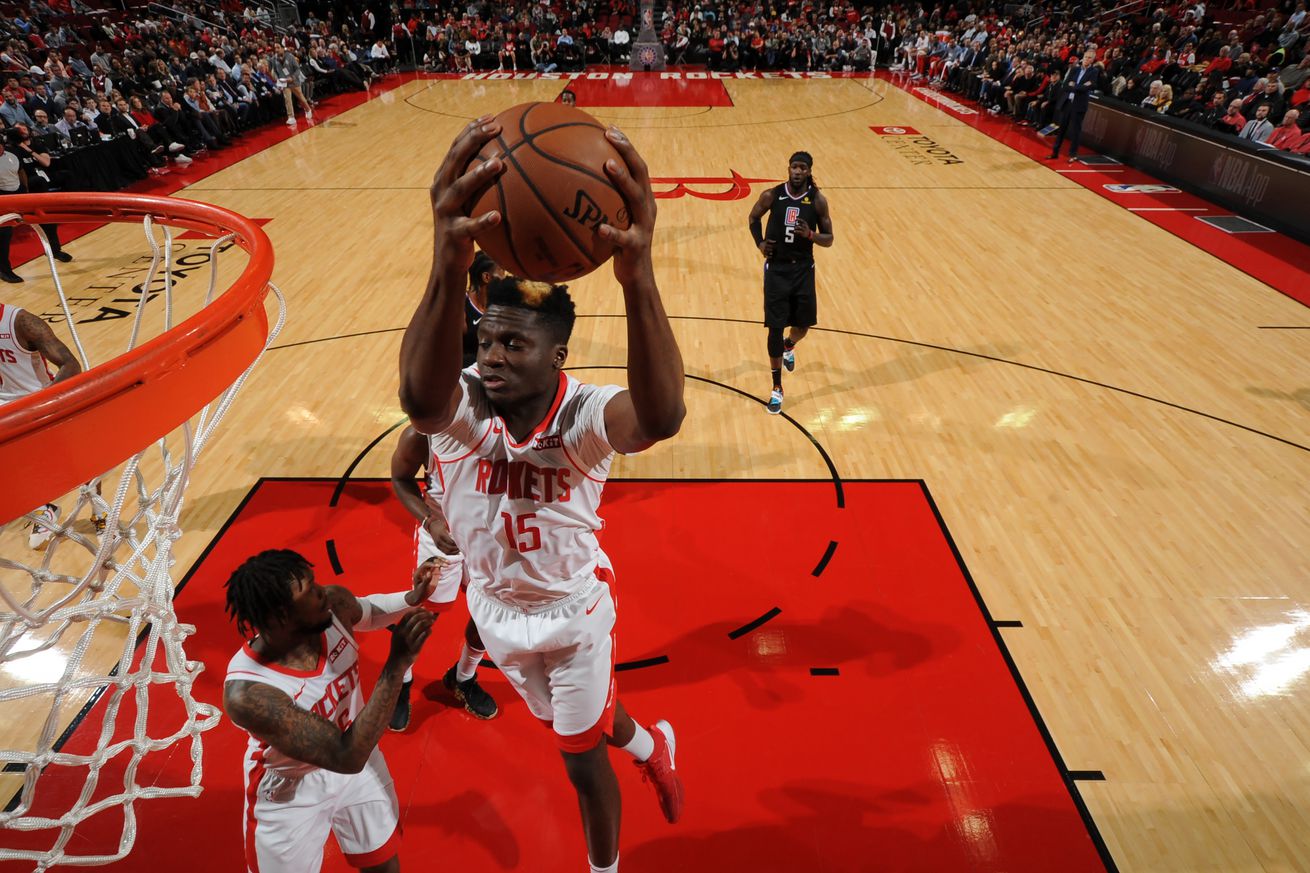 And his absence is going to be a big blow.

Following a convincing win over the Los Angeles Clippers, the Houston Rockets returned to practice on Thursday to prepare for their next game against the Indiana Pacers. As each active player stepped onto the court, most notably missing from the group was Clint Capela.

To no one’s surprise, the 6’10” big man from Switzerland did not participate in practice after taking a blow to the head by Clippers’ forward, JaMychal Green. The collision caused Capela to miss the remainder of Wednesday night’s game, and as Jeremy mentioned in his piece, Clint has been ruled out for Friday’s home match.

The head injury Capela sustained could not have come at a worse time. Not only did the injury occur while the Rockets trailed by one late in the fourth quarter, but it came during what could be considered the best stretch of games in his career.

“Clint is definitely out tomorrow [Friday], and then I think we’re seeing about Saturday, but it looks doubtful. I don’t think he has a concussion, but they have to check to see if he does.”

Capela had been on a tear as of late averaging 13.6 points, 17.8 rebounds and 2.0 blocks over the past five games. Prior to his premature exit against the Clippers, Capela made history by become the first Rockets player since Moses Malone (1982) to post three consecutive 20-rebound games after recording a performance of 12 points and 20 rebounds in the win.

The All-Star-caliber strides Capela has taken over the past week is a complete 180 from the struggles he endured at the start of the season. According to D’Antoni, Capela’s most recent improvements are a result of getting into better shape.

He has gotten himself into shape and has built his stamina. Not only him, but all the other guys have looked a little bit better. When you are not quite in shape and not ready, it is hard to produce on the court. He is getting there.

Although James Harden has received a bulk of the recognition for the Rockets’ most recent success, Capela’s on-court production has had a substantial impact, most notably on the defensive side of the ball.

Clint Capela took some time today at practice to work on his free throw shooting. The big fella has been phenomenal averaging 14 points & 17.2 rebounds the past four games.
#Rockets pic.twitter.com/uFwdc1zyAr

During the first six games of the season, the Rockets looked as if they were a slightly above average team, standing with a .500 record (3-3). Houston’s defense averaged a league-worst 127.0 opponents points per game, and they placed in the bottom half of the league in rebounds (44.0 rebs) and blocks (5.0), in addition to posting the second-worst defensive net rating in the league at 116.2 per game.

After Capela took his game to an elite level, the Rockets have looked to be one of the top contending teams in the league. In the midst of riding a five-game win streak, Houston has held its opponent to an averaged of 103.0 points per game (5th best in the league), placed in the top-five in defensive rebounds (41.2 rebs) and blocks (6.6 blk). All while possessing the league’s best defensive rating at 98.5 per game.

“I think Capela’s most recent games are right up there as his best. He has had some playoff performances that stands out, but he is just as good as he has ever been.”

Ahead of his sixth season in the league, Capela told reporters it was his goal to dominate more as a shot-blocker, rebounder, and improve his ability to finish around the rim during Rockets’ Media Day in September. Despite a sub-par start to the season, Capela is well on his way to living up to his season goals.

And if he continues to dominate upon his return from injury, perhaps Capela will achieve his ultimate goal of becoming an All-Star player. A goal that he set for himself in the summer of 2018.

With Clint Capela out for at least one game, Tyson Chandler will replace him in the starting lineup against the Pacers on Friday.