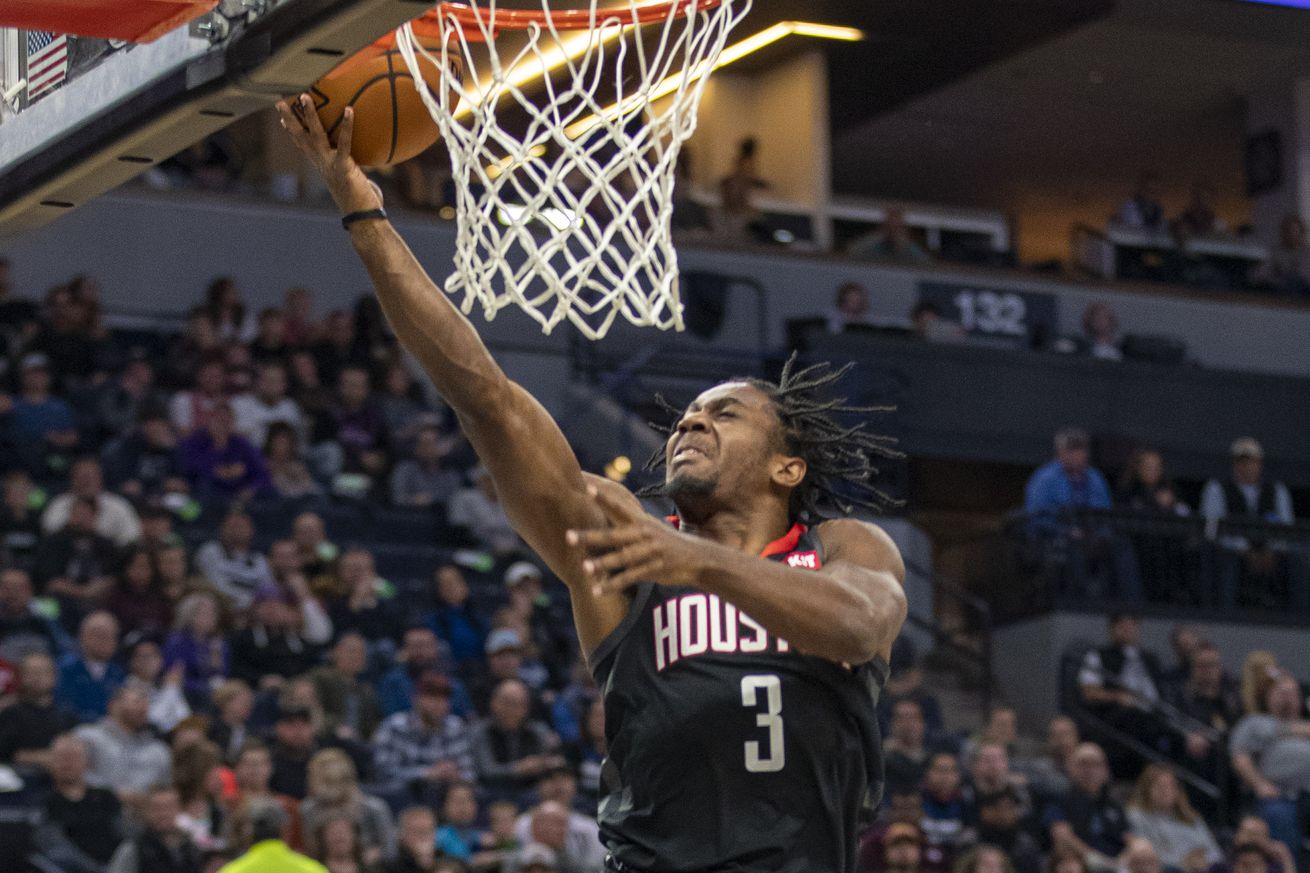 Maybe the NCAA’s 3rd all-time leading scorer can play a little, and not just BE little (in NBA terms). | Jesse Johnson-USA TODAY Sports

Harden & The Bench Roll On

One could have forgiven the Rockets for losing this one. After defeating an Indiana team that always plays hard, and hard-nosed, the Rockets got on a plane and flew to Minneapolis, arriving after 3am. That looks like a schedule loss right there.

Add to it planned rest for Russell Westbrook, injury absences for Eric Gordon, Danuel House and Clint Capela and the Rockets were down at least three starters by any measure. That could be another reason for a loss.

The Timberwolves themselves have played well overall, and the Rockets were fortunate to miss Andrew Wiggins tonight. Wiggins, an oft-maligned player, has been experiencing a career renaissance, or perhaps just a naissance. He’s averaging 26 points, 5 rebounds, 3.6 assist to 1.5 turnovers, and 1 block, with strong shooting and three point percentages of 48% and 36% from three and the highest True Shooting of his career at 56%.

Perhaps this is just a nice run of form, but it also might be that a precociously talented player has come into his own at 24 years old. Sometimes calendar maturity brings basketball maturity. Wiggins entered the league as a presumptive star at 19. By contrast, Damien Lillard came into the league at 22. Anyhow, the Rockets did not face him, but his career resurgence, or just surgence, is worth mentioning for the future of a talented Minnesota team that has long-time former Rockets executive Gerson Rosas running the show now.

It would have been easy to forgive the Rockets a loss tonight. Minnesota was also on a back-to-back tonight, though at home, and perhaps that blunted their edge. They certainly started brightly, taking an eleven point lead at one point.

James Harden, the NBA’s best player, was not to be denied however. He scored 30 points in the first half (yes the first half) on his way to 49 points, 6 assists and 5 rebounds in 39 minutes. I’d love to see the minutes a bit lower, but to be fair, his last four minutes consisted largely of him walking around and draining three pointers. There’s probably a proprietary “Minutes Intensity” metric out there, but from the eye test, it looked more like about 35 intense minutes.

Harden didn’t do it alone, however. The deep bench came through. 21 year old center Isaiah Hartenstein played 31 big minutes, and outrebounded Minnesota star Karl Anthony Towns, 16-15, with five of Hartenstein’s boards being on the offensive glass. He’s still unpolished, but there’s a lot to like there, particularly with Tyson Chandler seeming to feel the effects of his previous nights excellent outing. Chandler seemed unable to keep up with the fleet, but at many points, invisible, Towns.

Rookie Chris Clemons also came up big tonight, notching 19 points on 5-9 shooting from 3pt range, and playing solid defense. He’s 5’9”, which is a disadvantage, but less than in the past perhaps, as virtually no one posts up, or plays back-to-the-basket anymore. He can run at shooters and contest shots effectively, it would appear, and he’s highly mobile.

Austin Rivers played well, scoring off drives on a quick first step, and useful hesitation dribble He had 19 points on 8-17 shooting, to go with his usual strong defense. Ben McLemore may have found his forever home in Houston as well. He scored 20, going 4-11 from 3pt range.

The big story, and difference in the game, however, was the defense. The Rockets allowed 62 Minnesota points in the first half, but only 43 in the second. No, the depleted Rockets didn’t hold the Timberwolves under 100, but the second half delta to the first half for Minnesota was essentially the margin of victory.

It also helps to have James Harden, certified badass.