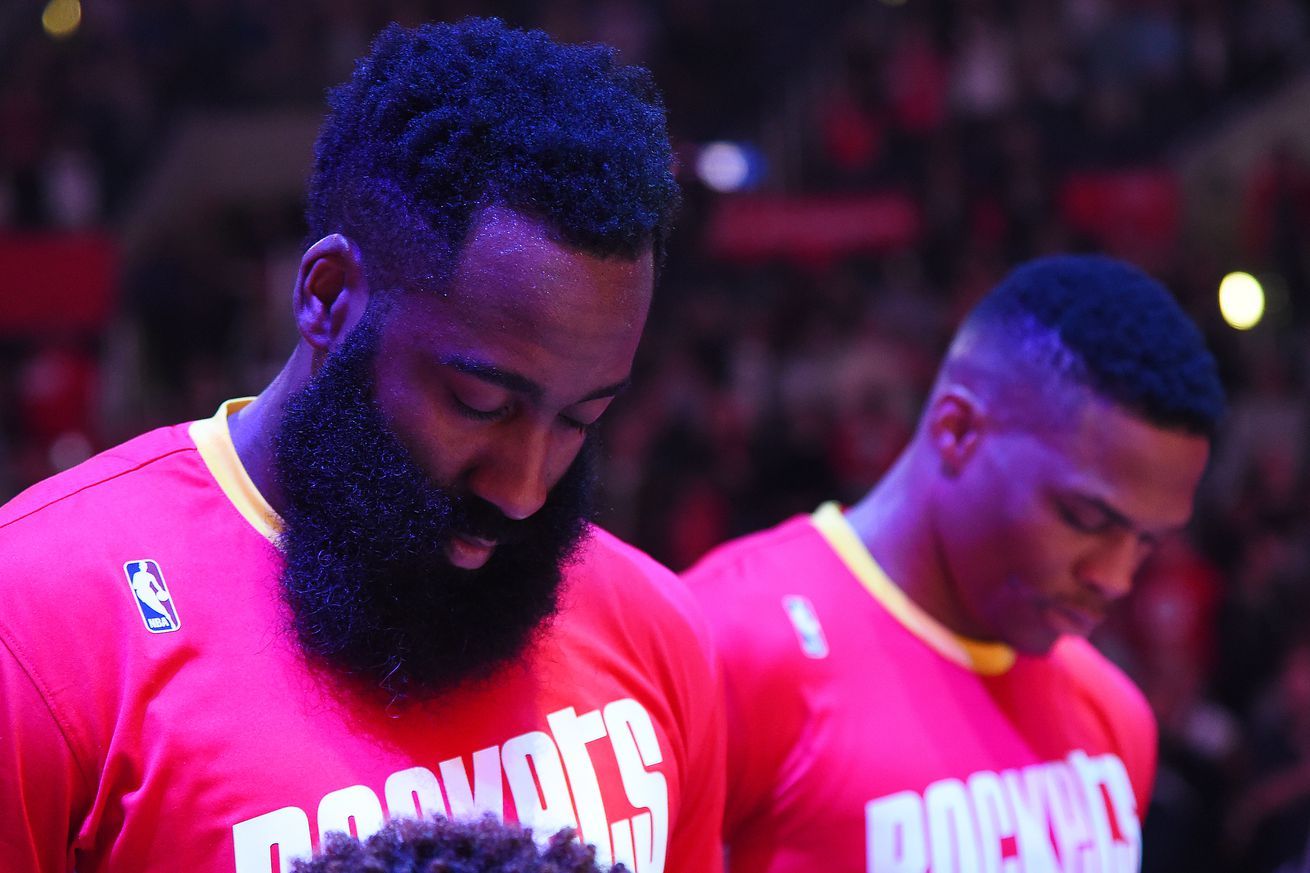 A month into the regular season has told a lot about what’s in store for the Houston Rockets.

On a Tuesday evening in late October, Game 7 of the World Series between the Nationals and the Astros was the most important game between two cities, Washington and Houston. As title hopes hung in the atmosphere of Minute Maid Park, another interesting battle took place in the nation’s capital — where the Rockets and the Wizards took center stage of the sports world.

With a combined 317 points scored, the Rockets outlasted the Wizards in a 159-158 victory, in what is now memorialized as the third-highest scoring game in NBA history.

In a loss, Bradley Beal proved why he is considered one of the best guards in the league, as he poured in 46 points, but it is unfortunate that his statement game came on the same night where James Harden led the Rockets to a win, scoring a season-high 59 points.

“I don’t care about that [averaging 40.0 ppg], I just want to win games. It’s whatever it takes to win, and that’s what I go out there and do every single night. It’s a team effort and I take what the defense gives me. That’s my mentality every game and that will never change.” – Harden

After he erupted for over half a century inside the Capital One Arena in Washington, Harden’s performance was an example that the seven-time All-Star was on pace for another historic scoring spree. He went on to score 30 or more in 11 of the next 13 games, as the narrative of averaging 40.0 for the entire season became a reality after he averaged 38.3 points through the first month.

By scoring a total of 613 points, Harden joined the likes of Wilt Chamberlain, Jerry West and Michael Jordan as the fourth player in history to score 600 or more points in 16 games or fewer.

Reaching heights only Chamberlain can relate, Harden is an early front-runner for MVP honors through the first month of the regular season. But what makes Harden’s historic scoring spree more impressive than years prior is that he is achieving such a feat while playing alongside another top-10 player on the court.

Westbrook will not change and it is for the better

It was the argument seen around the world.

Opening night inside the Toyota Center in Houston where Harden and Russell Westbrook got into a heated exchange in a 117-111 loss to the Milwaukee Bucks. Although it was the first game of the season, naysayers took this single incident to justify their beliefs as to why the pairing of Harden and Westbrook will not work.

This next day at practice, the two guards clarified the exchange by explaining that the animated discussion was Harden’s attempt to calm a frustrated Westbrook down after a trash talk altercation that involved a Bucks’ rookie.

“Regardless of what the conversation is going to be, we are friends and that is the most important part. All the basketball stuff is irrelevant, and the most important thing is our brotherhood. That’s all I care about.” – Westbrook

The so-called argument is about the only negative situation on the Rockets’ All-Star backcourt, as the pairing has seemingly worked well together. They are currently the league’s highest-scoring duo, averaging 60.2 points per game, all while helping the Rockets close the first month of the regular season with an 11-6 record.

As Westbrook likes to remind everyone, the dynamic duo between he and Harden is still a work in process that is trending in the right direction. What has made this an easy transition for both Westbrook and Harden has been Mike D’Antoni’s willingness to allow the eight-time All-Star to be himself on the court.

Prior to the start of the season, D’Antoni said his goal was not to change Westbrook’s playstyle, but to use his skill set to improve the Rockets has a whole. Westbrook has allowed D’Antoni to revert to his fast-paced offense, which has been renamed to ”Six Seconds or Less,” while improving to the third-fastest team in the league (105.56) — in comparison to the second slowest (97.23) ball club a month into the season last year.

“I play my game, plain and simple. After 12 years in the league, why change now? There are some things I can improve and different things I can do to adjust, but I am not changing my game.” – Westbrook

Defense may be the Rockets’ demise

Four nights after giving up a total of 158 points to the Wizards, the Rockets gave up 120 to the Miami Heat. A few days later, Houston bounced back from a 29-point defeat in a win over the Santa Cruz (Golden State) Warriors. The only problem in the win, they gave up 112 points to a G-League (NBA) team.

The Rockets stumbled out of the gates through the first six games (3-3), and their inability to defend played an enormous role. They averaged a league-worst 127.0 opponents points per game, and ranked near the bottom of the league in rebounds (44.0 rebs) and blocks (5.0 blks), all while posting the second-worst defensive net rating in the league at 116.2 per game.

After one of the worst defensive games in franchise history against the Heat, the Rockets improved their defense that resulted in an eight-game win streak.

Houston held its opponent to an averaged of 103.8 points per game, placed in the top-five in defensive rebounds (38.6 rebs) and blocks (6.1 blk), as well as recording the league’s second-best defensive rating at 100.1 per game.

The eight-game win streak appeared to be the pinpoint that the Rockets were going to be an elite defensive team in 2020. Unfortunately, their defensive turn around may have been the result of playing against the NBA’s bottom feeders other than actual improvement made on the court.

“We scored 120 points, so obviously it’s defense. … Our defense has to be better. When we play great defense, we win. Period.” #OneMission pic.twitter.com/YQZAxi3lcs

Since losing to the Denver Nuggets on Thursday, the Rockets are currently riding a three-game losing streak while allowing an average of 121.3 opponents points on 48.9% field goal shooting. They closed their first month of the regular season in a loss to the Dallas Mavericks, where Houston gave up 137 points — their second-highest of the season — with Luka Doncic scoring 41 points in the win.

While the fit between Harden and Westbrook continues to be a topic of discussion, Houston’s ability to defend is a greater cause for concern. If the Rockets do not solve their defensive issues soon, one can expect another disappointing playoff exit come late April or early May.