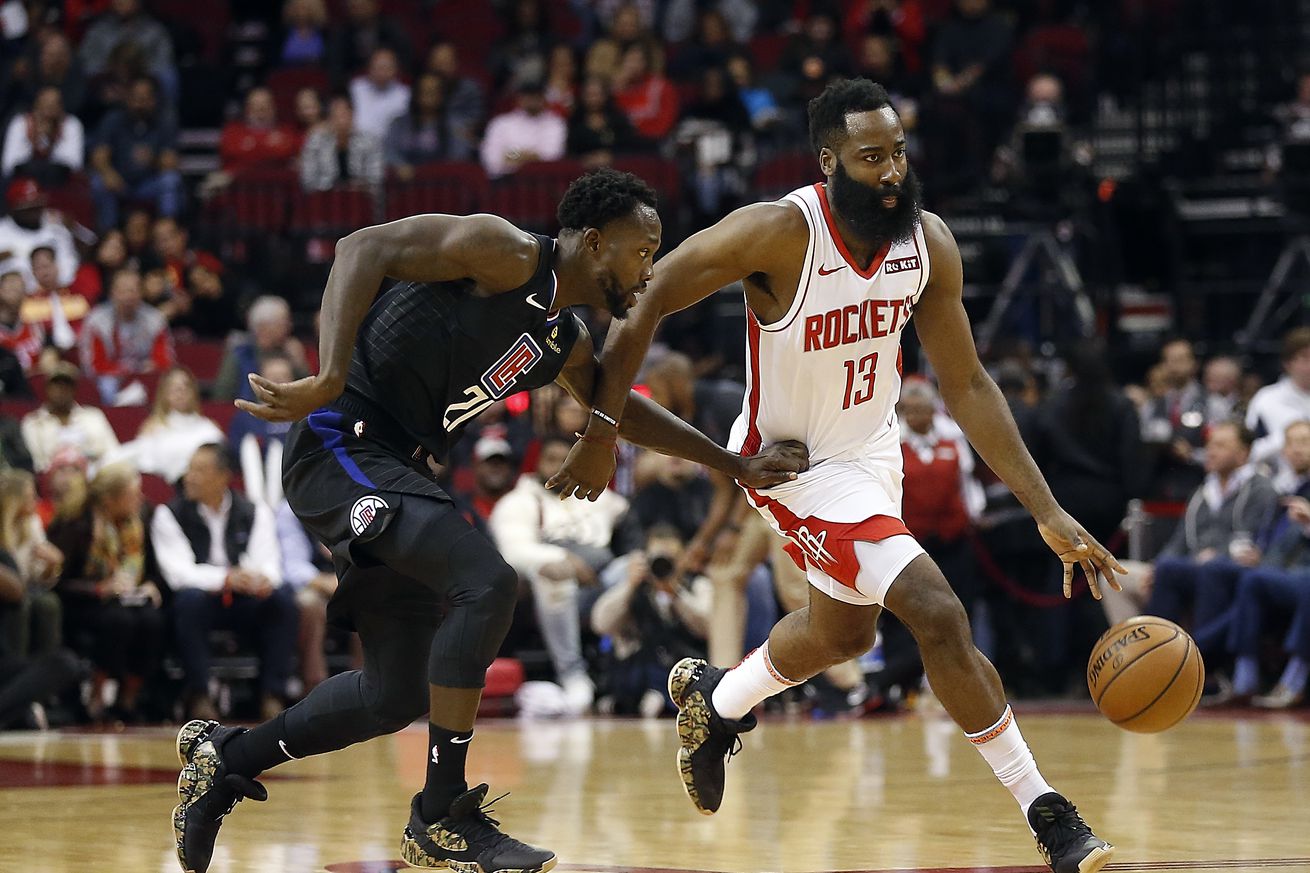 Beverley huffed, and puffed, but Harden blew his house down. | Photo by Bob Levey/Getty Images

With the triumphant return of Classic Clipper Collapse Complaining!

A nationally televised game on ESPN’s big Wednesday night of basketball, with Jeff Van Gundy calling the game in his hometown! Two teams with identical records, the Rockets “struggling” to 7-3, while the Clippers have been “dominant”, if one consults certain sources. The stage was set for inexplicable favorite Kawhi Leonard (aka The Forklift) and inexplicable villain, James Harden (aka The Beard), to face off. Face off they did.

The first quarter was pretty much all Rockets, with Houston playing faster, more aggressive basketball, spreading the ball and making shots. The Clippers seemed stuck in the mud, and managed a paltry 15 points, to the Rockets 31. T

he main downside for the Rockets was the collection of four fouls in the quarter for Russell Westbrook. The first three seemed legit, but the fourth looked like a no-call, with Westbrook and NFL linebacker prospect Rodney McGruder tussling in a sequence that would have been best ignored by the refs.

It would prove to be an ominous sign for the many perplexing officiating decisions to come.

The second quarter was ponderous, but the preponderance was in favor of the Clippers, as they cut the Rockets lead considerably late in the quarter. A flurry from the Rockets to close the half cut the 2nd quarter advantage to 4 points for LAC. The half concluded with the Rockets leading 49-37, a score line from Days of Yore, in the NBA.

The third quarter featured a considerably crisper Clippers, with Lakers reject Ivica Zubac seemingly making a ton of good passes, and also scoring for the Clippers. His stat line of 7pts, 3 rebounds and 2ast doesn’t do his impact in the quarter justice. Fortunately he was substituted and did not return, as he often proved too powerful for Clint Capela to overcome in close to the basket.

The Rockets without Eric Gordon and Danuel House had to rely on Austin Rivers and Ben McLemore to come through from the pass out to the (usually wide open) 3pt shot. They did not deliver, going 3-16 between them. Much of the Clippers closing on the Rockets had to do with non-Harden Rockets shooting poorly. Westbrook also elected to shoot threes, and mid-range shots, particularly when other Rockets declined to attempt shots, after their misses. This is not Bestbrook. It might even be described as Worstbrook. Or even, sigh, Westbrick. That said, he made key shots late, and it’s hard to blame him for not going to the basket when his attempted drives to the basket were met with obvious fouls, and few to no calls.

Westbrook getting a technical foul (at far below Draymond Disrespect levels) after complaining of being mauled on a drive (he was), is just a sample of reffing horrors that afflicted both sides.

Long, pointless reviews, extremely touchy technicals, touch fouls called, followed by obvious contact and no call. Ponderous reviews were exacerbated by the sense that the referees were perhaps instructed to call certain things to watch for certain actions by the Rockets, but not the Clippers, offensive fouls in particular.

The Clippers continued to whittle down the Rockets lead, scoring 31 in the quarter to the Rockets 25, as The Forklift and JaMychal Green seemingly could not miss. Green finished the night 4-7 from 3pt range, and also took out Clint Capela on an NFL-style hit to the head, so he had a good outing from a Clippers perspective.

The fourth quarter began all Clippers, and stayed that way for much of it, as the Rockets, sans Harden, continued to clank away from downtown (Austin Rivers, Ben McLemore) , at the basket (Rivers, Westbrook, McLemore, Thabo Sefalosha,), mid-range (Westbrook).

The Clippers whittled away, and eventually took a four point lead on a 4pt play by Leonard that featured Thabo Sefalosha’s hand being very near Kawhi’s after the shot.

That call seemed to anger James Harden. He finished driving layups in traffic, he made his patented FU3 from 30+ feet. He made free throws off Patrick Beverley’s weird new defensive tactic: attempting to stick his head between his opponents thighs while guarding him.

Beverley is a player I quite admire, but as Rockets announcer Bill Worrell might have said “Patrick just doesn’t have enough sand in his pants to guard Harden.” It’s true, despite Beverley trying desperately to get into Harden’s pants in a strange, basketball-ish, fashion.

The end of the fourth featured Harden lighting the Clippers up, Westbrook making a key 3pt shot, and Beverley getting a tech on his sixth foul, and then another tech after his sixth foul and disqualification.

In the brouhaha surrounding Beverely, Doc Rivers attempted to call an inappropriate timeout of some sort. His own son pointed out that this should draw a technical foul (true). He then signaled for his father to phone him. It was truly Epic Trolling, son to father. I expect there are at least 30 memes already.

At this point Rivers and the whole Clipper side embraced The Classic Clipper Complainer Within. It was historically accurate. They flounced around with a sense of injustice, didn’t really do much more playing of basketball, and generally had a hissy fit in a game they’d managed to lose almost entirely on their own.

In the end, it was reffing confusion and chaos. The Clippers seemed to leap upon this as an excuse for their impending loss, and acted like a bunch of children. It was like Blake Griffin, Chris Paul, Matt Barnes and JJ Reddick had never left, such was the whining.

Doc Rivers is the one constant in the Clippers being a particularly whiny and self-pitying team. The purportedly emotionless forklift Kawhi Leonard has apparently had a whining module installed in LA. This magnificent achievement demonstrates the unstoppable progress of science, and its constant improvement of our lives.

Kawhi showed off his new software mod when James Harden magicked the ball out of his hands late, with a spectacular steal. This sort of steal is apparently to be admired by all when done BY Kawhi, but is the worst sort of foul when done TO Kawhi (according to Kawhi).

So now two teams that began the evening with identical records don’t have identical records anymore. The Rockets won a big game behind James Harden’s 47 points (on 7-13 from 3pt range), 7 assists, 6 rebounds and 3 steals. He’s probably the best player in the NBA, and is averaging (averaging!) close to 40 a game.

The Clippers were still down Paul George, who opted not return from injury tonight so that the Clippers would have him the next game, when Kawhi Leonard would presumably rest on the second night of a back-to-back. Why the Clippers possibly thought they couldn’t beat Memphis without him is unclear. My theory is that Paul George is avoiding the Rockets. The also didn’t have Landry Shamet, due to injury.

The Rockets were missing Eric Gordon and Danuel House, two key players, and later, Clint Capela, who had 20 rebounds and 12 pts at the time. The Rockets center seemed to suffer a head injury. The Swiss Rocket was taken out in a play that both highlighted bad calls, and the ponderous review, or in this case, non-review process, despite the game stopping a considerably amount of time, for the disallowed Coaches Challenge and later explanation as to why it was declined. In Capela’s case, standing in the restricted area apparently means a player can’t suffer a flagrant foul.

In the end a weird, disjointed, odd game where the Clippers showed that the more things change, the more they stay the same.