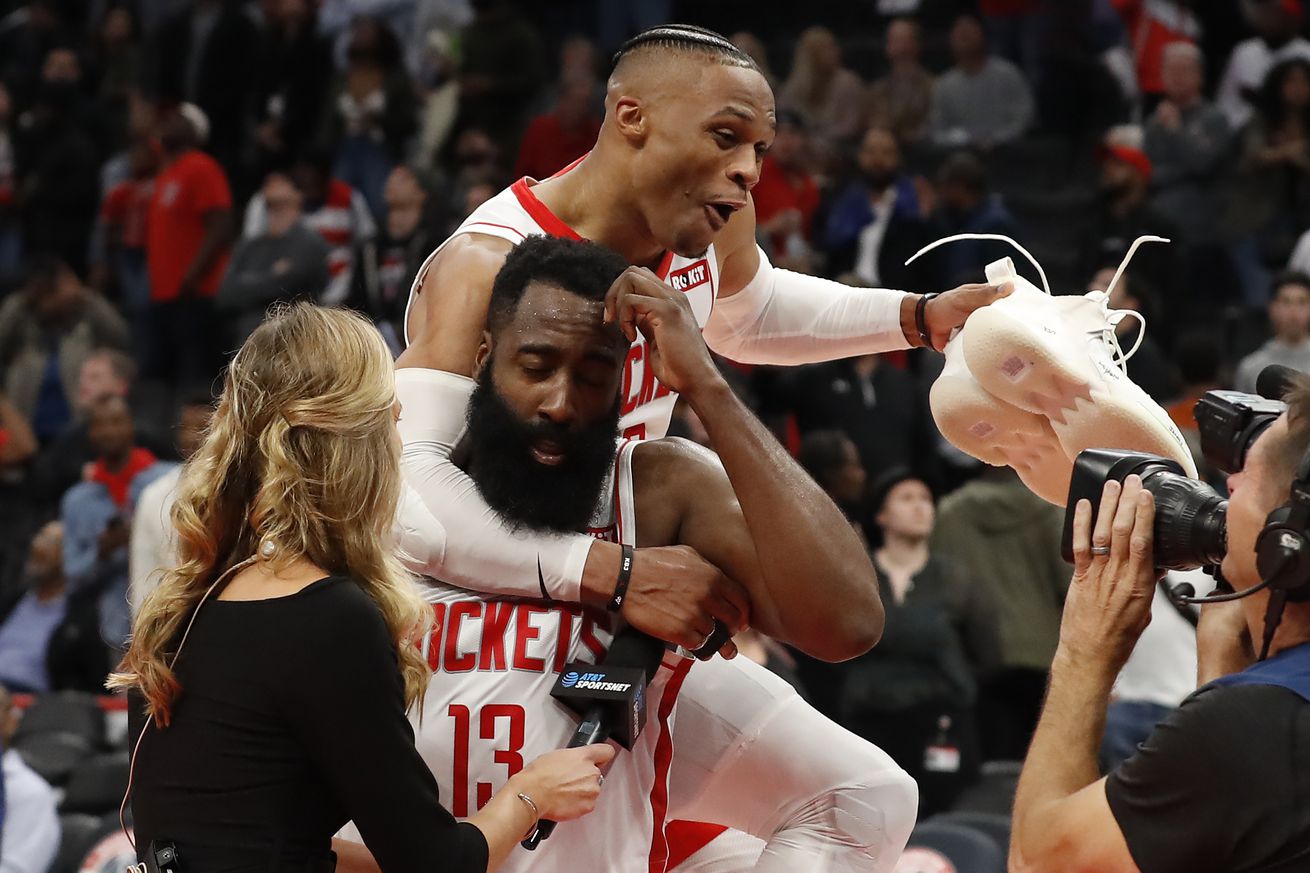 The Houston Rockets came out victorious in what will likely be one of the more memorable games of the entire season, defeating the Washington Wizards by a final score of 159-158. You read that correctly, One Hundred and Fifty-Nine to One Hundred and Fifty-Eight. No overtime, no double overtime, just 48 minutes and (obviously) no defense.

James Harden was the high-man for the Rockets tonight, going completely bonkers with 59 points on 18-of-32 from the field, including 6-of-14 from deep, and 17-of-18 from the stripe. Harden painted his masterpiece tonight in the third quarter, finding a way to dodge his early-season struggles from three-point range.

Russell Westbrook registered his second triple-double of the season, after amassing 17 points on 7-of-16 from the floor, 10 rebounds, 12 assists, and 2 steals.

The Rockets raced out to an early double-digit lead in the opening frame following Clint Capela’s impressive block at the rim, resulting in a Danuel House corner three courtesy of Harden. But with Westbrook heading to the bench shortly after, Washington ripped off a 14-2 run to retake the lead after Troy Brown Jr’s layup. In his first minutes of the 2019-20 season, Ryan Anderson ignited the first of three consecutive possessions where the Rockets converted from downtown. Houston led 35-34 after one.

The first half was undoubtedly the Rockets’ best 24 minutes of offense on the season, as they shot a blistering 48.1% from downtown on 27 attempts. But for as good as the Rockets were in the scoring department, they were equally abysmal on the defensive end of the floor. The Wizards set up shop in the paint and went 63.8% from the floor, taking full advantage of Houston’s overall disinterest in defending. Bradley Beal’s buzzer-beating layup put the Wizards up 77-76 at the break, closing the half on a 14-4 run.

It didn’t take long for the third quarter to become the James Harden Show. Whether it was breaking Isaac Bonga’s ankles or beautifully feeding Tyson Chandler with his patented pocket pass, The Beard was clicking on all cylinders. Harden recorded 21 points on 7-of-11 from the floor in the third. Despite Harden’s greatness, the Wizards shot 68% from the field in the quarter and led 117-111 going to the fourth.

In what turned out to be a back-and-forth offensive slugfest fourth quarter reminiscent of a Rocky IV montage, the Rockets were in dire need of some timely stops. After Harden’s freebies trimmed the Rockets’ deficit to six with under two minutes remaining, Houston forced a Thomas Bryant miss on his fadeaway attempt over Eric Gordon. Harden converted his free throws on the other end and the Rockets trailed by four. Following another Rockets stop, Westbrook’s put-back on the offensive glass after a Harden miss brought the Rockets to within two. Isaiah Thomas’s turnover presented a golden opportunity for the Rockets and Gordon took advantage, nailing a wide-open three from the top of the key to put the Rockets up 153-152 with under a minute to go.

Beal’s and-one on the next trip down temporarily put the Wizards back in front before Westbrook responded with an and-one of his own with 32.4 remaining. A Beal turnover and a pair of free throws from Tucker put the Rockets up three with the Wizards facing the brink. Beal was able to draw the foul on his three-point attempt over Tucker, converting all three from the stripe, tying the game with 8.1 on the clock. Instead of calling timeout, Harden received the in-bounds pass under his basket and went to work on Bonga in the half-court, drawing the foul and nearly converting the and-one with 2.4 remaining. Harden made the first free-throw and missed the second, with the Rockets dodging a potential bullet following Westbrook’s reach-in attempt as the clock struck zero.

This was a far cry from the pitcher’s duel in Game 7.