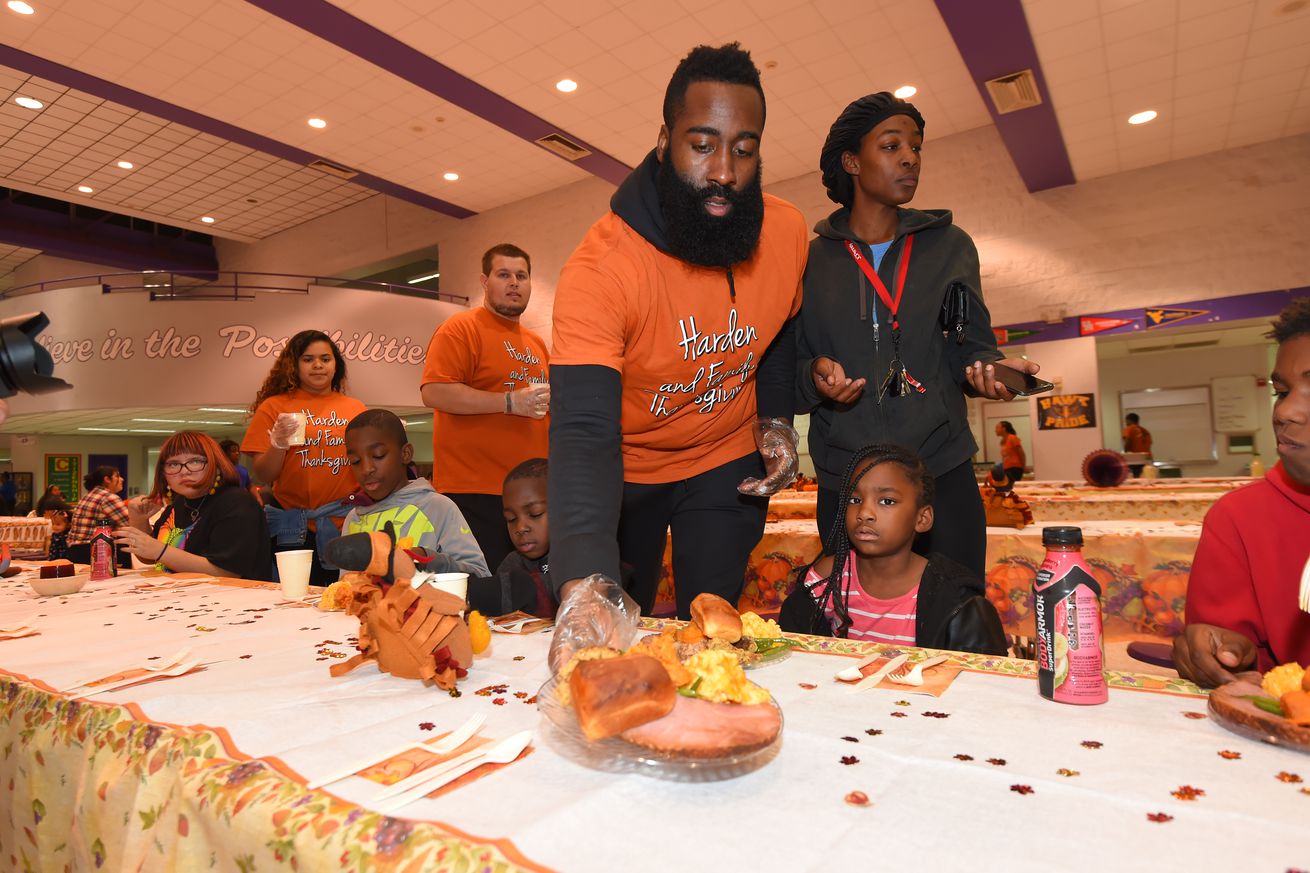 James Harden continues a long tradition of helping others.

Something that often gets overlooked with James Harden while people are getting caught up in superficial Twitter wars about “likability”, free throws, defense, comparisons to Luka, and hang ups about strip clubs is how much the Houston Rockets star always gives back to his community.

The Beard loves the city of Houston just as much as its residents love him, and one of the many ways he gives back is though his 3 The Harden Way Foundation, which offers scholarships to students from singe-parent households and for those facing economic hardship.

#Rockets star James Harden hosting an annual Thanksgiving dinner for a community in Houston. This is the 8th year for this event. Good stuff. pic.twitter.com/q0fOKC4jye

Harden was joined by his mother, who is the namesake for one of his major scholarships, and it’s easy to see how important this aspect of giving back the community is to him. He told the Houston Chronicle:

“That’s my life in general. I’ve come a long way. Me playing basketball on a high level is one thing. That’s one case. But off the court, the impact I can (have,) that’s another. Just as much as I try to go out there and win every game and do my best. I try to do the same thing off the court. It doesn’t always come out how you want, but if you have a good heart and you have good intentions, that’s all that matters.

“My job is to come out here and make sure they smile for however long I’m here. Same thing with my Christmas giveback. Those kids and those families need spirit and need somebody to help them and that’s what I’m here for.”

In addition, he also had this say to Fox’s Mark Berman, and also revealed that he’s a little hurt right now:

James Harden joining with his mother & his foundation to provide a Thanksgiving meal for about 250 people at N.Main Church of God & Christ.James says moments like this help him get away from the grind of the season:”I’m a little banged up right now & I don’t even care about that” pic.twitter.com/siC3uFoGJG

But Harden’s not the only Rocket giving back this Thanksgiving season. Gerald Green and Danuel House have actually turned the “Green-House effect” nickname into a charity, and they started off the week providing turkeys and other holiday food items to residents in the Houston area.

Gerald Green & @DanuelHouseJr formed the “Green-House” Effect community initiative to give back to their hometown of Houston.

As Harden mentioned, he’ll be back at it again during the Christmas season with his Christmas buyback, in which he takes 70 children and their families on a Target shopping spree. This will be the eighth consecutive year he has done that.

He also holds the J-H Town weekend every summer, which features music, comedians, a charity softball game, and other festivites to raise money for his scholarship foundation. And if you recall, he also donated $1 million to Hurricane Harvey relief in Houston, which went to help victims in a variety of ways.