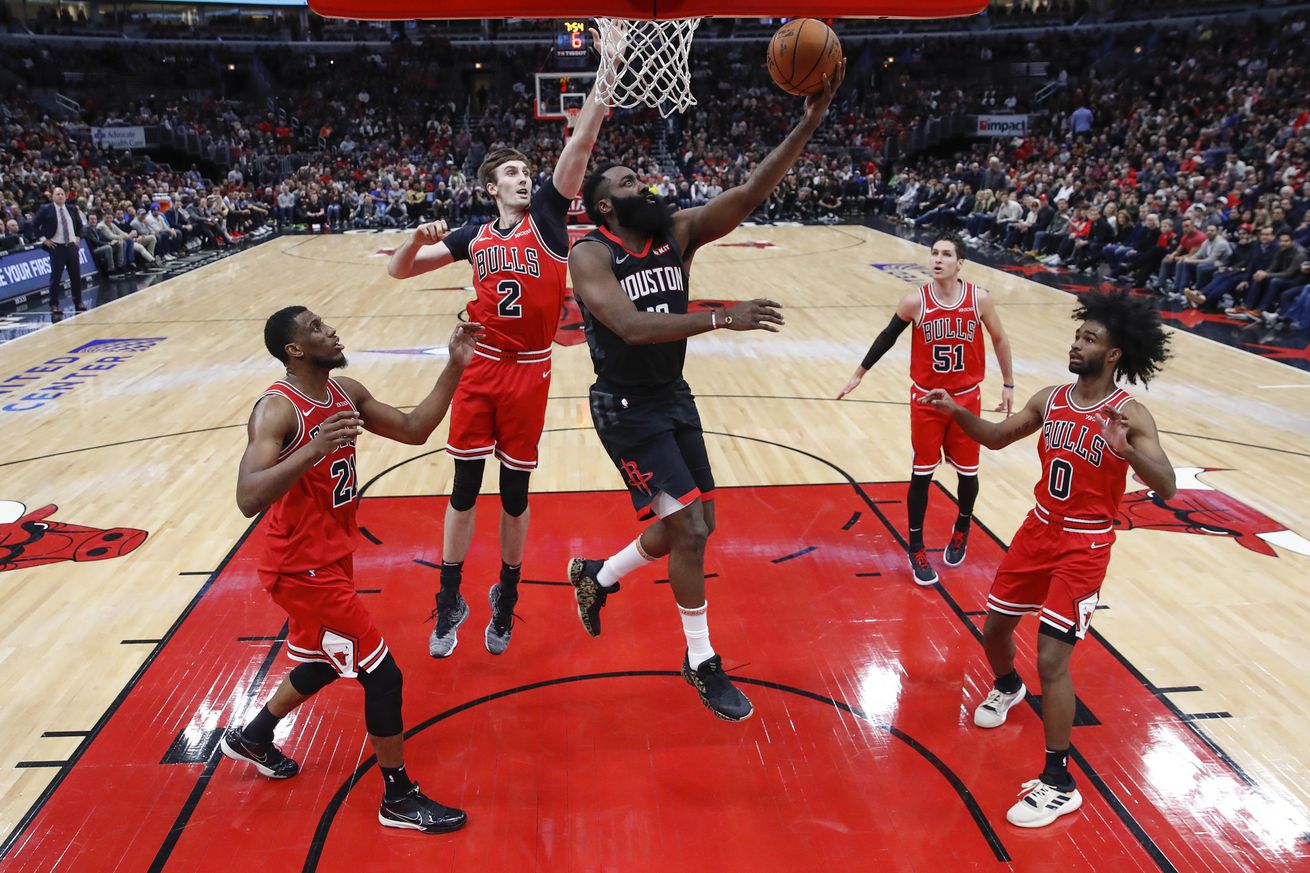 Harden’s 42 points lead the way for the Rockets.

The Houston Rockets did what they had to do Saturday night in the Windy City, defeating the lowly Chicago Bulls by a final score of 117-94. The Rockets sleepwalked their way through this one, their third victory in a row, until a late third-quarter run essentially put the game away for Houston.

James Harden led the way for Houston tonight, having his way with the Bulls’ defense to the tune of 42 points (12-of-27 FG, 9-of-19 3P, 9-of-11 FT), 10 rebounds, 9 assists, and 2 steals. After starting the year with some much publicized struggles from three-point range, The Beard has unquestionably found his stroke.

Russell Westbrook had yet another rock-solid performance, scoring 26 points on an efficient 10-of-20 from the field. The mid-range game was hitting early on and The Brodie finished it off with a handful of impressive drives to the rack. The two assists, however, were a season-low from Westbrook.

Clint Capela dominated on both ends of the floor, amassing 16 points, a season-high 20 rebounds, and 4 blocks. Capela had an entertaining matchup tonight against the former 2018 Duke lottery pick, Wendell Carter Jr.

Other than Danuel House’s perfect 3-of-3 start from the beyond the arc, the Rockets’ offense was fairly anemic out of the gate. After a Harden three put the Rockets up six, the Bulls closed the first on a 13-0 run, taking full advantage of Houston’s five-minute scoring drought to close the quarter.

Even though the Rockets held the Bulls to an embarrassing 2-of-17 from three in the first half, Chicago scored 36 of their 49 first half points from inside the painted area. To make matters worse, Houston’s 15 turnovers in the half led to 16 points for the Bulls. That’s simply far too many easy opportunities for an offense that has long resided in the basement of the NBA. The Rockets held a 50-49 advantage at the break.

A 15-0 run capped by an Austin Rivers three late in the third helped the Rockets put this one in cruise control. Give credit to House, as he recorded five of his career-high six steals in the third quarter alone. The Rockets’ defense picked up, holding the Bulls to 26.1% from the field while outscoring Chicago 36-18 in the quarter. The Rockets led by 19 going into the fourth.

The fourth quarter was fairly harmless outside of some late fireworks by Harden and a nice response by Westbrook following a certain outburst from Mike D’Antoni after a called timeout. Westbrook missed an irresponsible three early in the shot clock and lollygagged back on defense much to the chagrin of D’Antoni. Westbrook answered with back-to-back attacks to the cup, highlighting the enormous opportunity he has playing in this offense. Harden later put the finishing touches on his big scoring night, nailing his ninth triple before hitting the bench for the final minutes of this blowout.

It’s worth noting, House was seen limping quite noticeably in the closing seconds of this one. Hopefully he can avoid a nagging injury as he’s become a crucial part of this Rockets team.