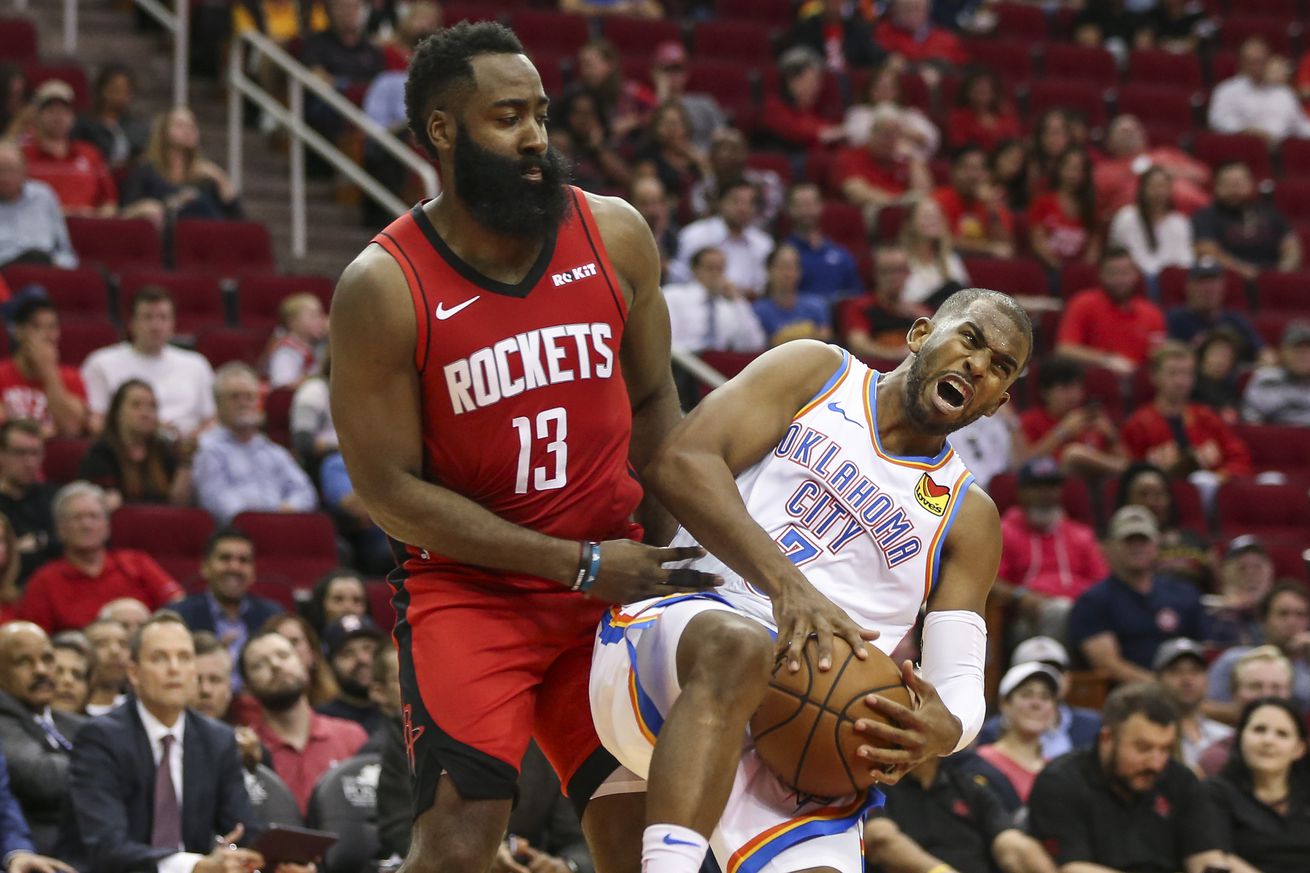 It wasn’t perfect, but it’s the second straight win.

We saw several shades of the Houston Rockets tonight. Version numero uno, which we saw in the first half, was the bad version. They were ice cold from deep, going just 4-25 in the first half, and perhaps most notably, the defense was sluggish and lazy. The Oklahoma City Thunder sprinted out to 62-52 halftime lead.

Starting with the third quarter, we saw the version of what the Rockets could be. James Harden and Russell Westbrook cranked up their thunder and lightening approach, and as a result, Houston started hitting shots and getting buckets. The defense tightened up, sparking a 31-15 third-quarter run. And even in the fourth, when the offense went cold, going 6 minutes without a bucket, the defense remained to keep the Thunder at bay and help the Rockets to a 116-112 victory.

Harden put up his first 40-point game of the year and his fourth consecutive 39+ point game against OKC by going for 40 on 8-21 shooting. He continued to struggle from deep, going just 3-14, but he got to the bucket and he racked up the fouls. The Beard also pitched in 7 assists, 3 rebounds, a steal, and a block.

Westbrook continues to shine in a Houston uniform, going for 21 points, 12 rebounds, and 9 assists. As Isaac mentioned in this piece earlier today, so far, Russ’s gangbusters style has been the perfect foil to Harden’s more methodical approach, and as you see them starting to click more and more, there’s a real opportunity to make some beautiful music. Russ is also developing quite a relationship with P.J. Tucker.

The clutch drive and dish by Russ (via @NBA) pic.twitter.com/julLbwgj9x

Tucker’s off to a fabulous start, going for 17 points and 9 rebounds on 5-7 shooting from deep, for a career-high third consecutive game with 15+ points. This could be a career year for P.J. if his chemistry with Westbrook continues to grow. And he’s still playing trademark Tucker defense as well.

In addition, the Rockets got 15 points, 7 rebounds, and 3 blocks from Clint Capela, 9 points and 5 boards from Danuel House, and 10 off the bench from Eric Gordon, though he continues to struggle with his shot, going just 4-11 from the field and 1-7 from deep.

The Rockets have plenty to improve on. The defense needs to get more consistent. Houston will only go as far as the defense takes them this season. The offense will score. Of that, have no doubt. If they can lock in defensively, they’ll be in business.

They also struggled on the boards. Westbrook has helped some, but they were outrebounded tonight 52-40, and you’d like to see a little more dominance inside from Capela, who is growing into his physical prime but hasn’t yet fully shown it on the court this season.

The Rockets are also getting next to nothing from their bench. They were outscored 54-14 by the Thunder bench, and if EG isn’t hitting his shots (and he isn’t), the Rockets don’t have much. Will D’Antoni reach further back into his roster and find some minutes for Chris Clemons, Isaiah Hartenstein, or Gary Clark? He should. Houston needs more from the backups.

The Thunder were led by Shai Gilgeous-Alexander and Dennis Schroder, who finished with 22 points apiece. They also got 17 from Danilo Gallinari, 15 from Chris Paul, who had a nice burst in the fourth quarter but was overall pretty quiet in his return to H-town, and a surprise 15 from Nerlens Noel.

The Rockets move to 2-1 on the season and have a night off before embarking on a five-game road trip that begins Wednesday night against the Washington Wizards. Perhaps a long road trip is just what the team needs to fully come together. The hints are there of something pretty nice, but there’s more work to be done to get this thing consistent. Would love nothing more than to see what these guys look like fully rounded into shape. They could be dangerous.