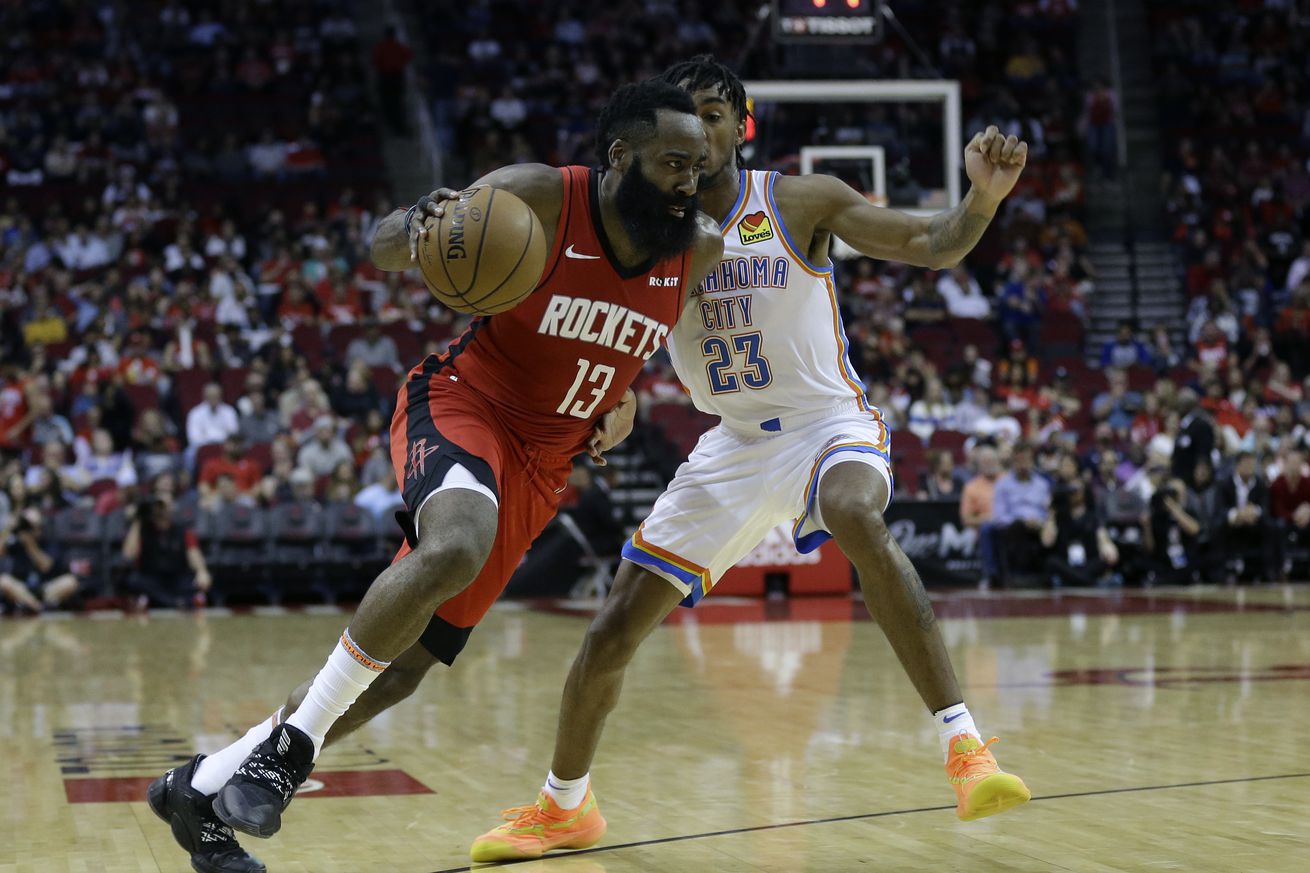 Here’s some things we learned after last night’s win.

The Houston Rockets dug a deep hole for themselves after allowing the Oklahoma City Thunder to pull ahead by as much as 15 points early in the first half on Monday night. Thanks to a big third quarter, they overcame and moved up to 2-1 on the season after a 116-112 victory at home.

Here are some of the biggest takeaways from that comeback win.

The Rockets followed up their abysmal 13-of-45 shooting from deep in their win against the New Orleans Pelicans with an even worse performance on Monday. Houston made only 10 of their 44 three-point attempts for an uncharacteristic 22.7% from deep.

The good news for Houston is that it’s actually not all bad news. Last season, the Rockets averaged a little over 45 threes a game, definitely a lot more than the rest of the league, but just about what they’re averaging now, so they’re not exactly settling or forcing shots up as far as volume goes. Houston also had a bunch of great looks, plenty of open shots off passes, they’re just not making them.

If you want to centralize it even more, Danuel House Jr. and Eric Gordon combined for 2-of-15 from three. You’ll be hard-pressed to find many nights where those two shoot that poorly. If Houston makes half of the open shots they missed, the game isn’t nearly as close.

James Harden Isn’t Making It Easier On Himself

OK, if you saw that I pointed out House and Gordon struggling from deep and wondering why I didn’t mention James Harden, it’s all calculated.

Harden shot 2-18 from three against New Orleans. Against the Thunder: 3-14. Harden’s shooting struggles to start the season is very perplexing given the blistering start he had in the preseason. Maybe it was a case of being too hot too early. The season should have started sooner.

Either way, Harden isn’t trying to break his slump with in-rhythm shots or catch-and-shoot opportunities. In typical Harden fashion, he’s shooting heavily contested step-backs and shots off the dribble, basically draped by his defender almost every shot. These are shots he can make any given night, but he should definitely look for easier shots and let himself see the ball go in before he gets back to hero ball.

Harden did have a great and-one three, though.

P.J. Tucker Is On A Roll

For the first time in his career, P.J. Tucker scored at least 15 points in three straight games. I read that via a graphic during the game, so I hope it’s right.

Whether that’s right or not, P.J. Tucker is averaging 16.67 points a game to start the season. Even more impressive is that he’s currently 12 for 18 from deep this season, five for eight this game, for a white-hot 67% three-point percentage.

While it was speculated that House would be their fifth scoring option, could it be that Tucker was the missing link the whole time, while the young forward is still trying to find his bearings? Or is this an even better situation where the Rockets have two wings averaging 15 points a game for them?

Trading Chris Paul For Russell Westbrook Was The Right Move

I might get heat for this “take,” but I honestly don’t see how.

In their win against New Orleans, Russell Westbrook had 28 points, 10 rebounds, and 13 assists on 9-17 shooting from the field. In his follow-up game, Westbrook again flirted with a triple-double (but who cares about that, right? Not us!) with 21 points, 5 offensive rebounds, 12 total rebounds, and 9 assists on 9-of-16 shooting. Westbrook has been incredibly efficient over the past two games too, going 12-14 from the free-throw line and attempting only 4 threes, making one of them.

This will not be the Chris Paul slander segment. The truth is, while Paul still has plenty to offer a team in his leadership, IQ, and all-around great basketball ability, Westbrook just has way more to offer in terms of, well, everything else. It was essentially Westbrook’s hustle, nose for the ball, and immense talent that led the Rockets to victory late, and what kept them in it all game.

Westbrook made plays the entire match the maybe only two other points guards in the NBA could make — that includes incredible put-back dunks like this.

Westbrook with the putback slam on the missed Harden shot! pic.twitter.com/aVIYg6EWRg

Or taking away a rebound from a big man who’s nearly a foot taller than him.

Then there’s the fact that Westbrook has the ability to get in the trenches for an offensive rebound, drive the ball, force the defense to collapse, and kick it out to the best option to ice the game.

Simply put, the Rockets needed a second guy who could do a lot more and take the load off of Harden, and Russ is more primed to do that right now. Even if Houston doesn’t have the same success in their first year with Westbrook like they did with Paul, they still made the best move for success.

Hopefully the Rockets can find their stroke from deep, as they start a four-game road trip beginning with the Wizards on Wednesday.