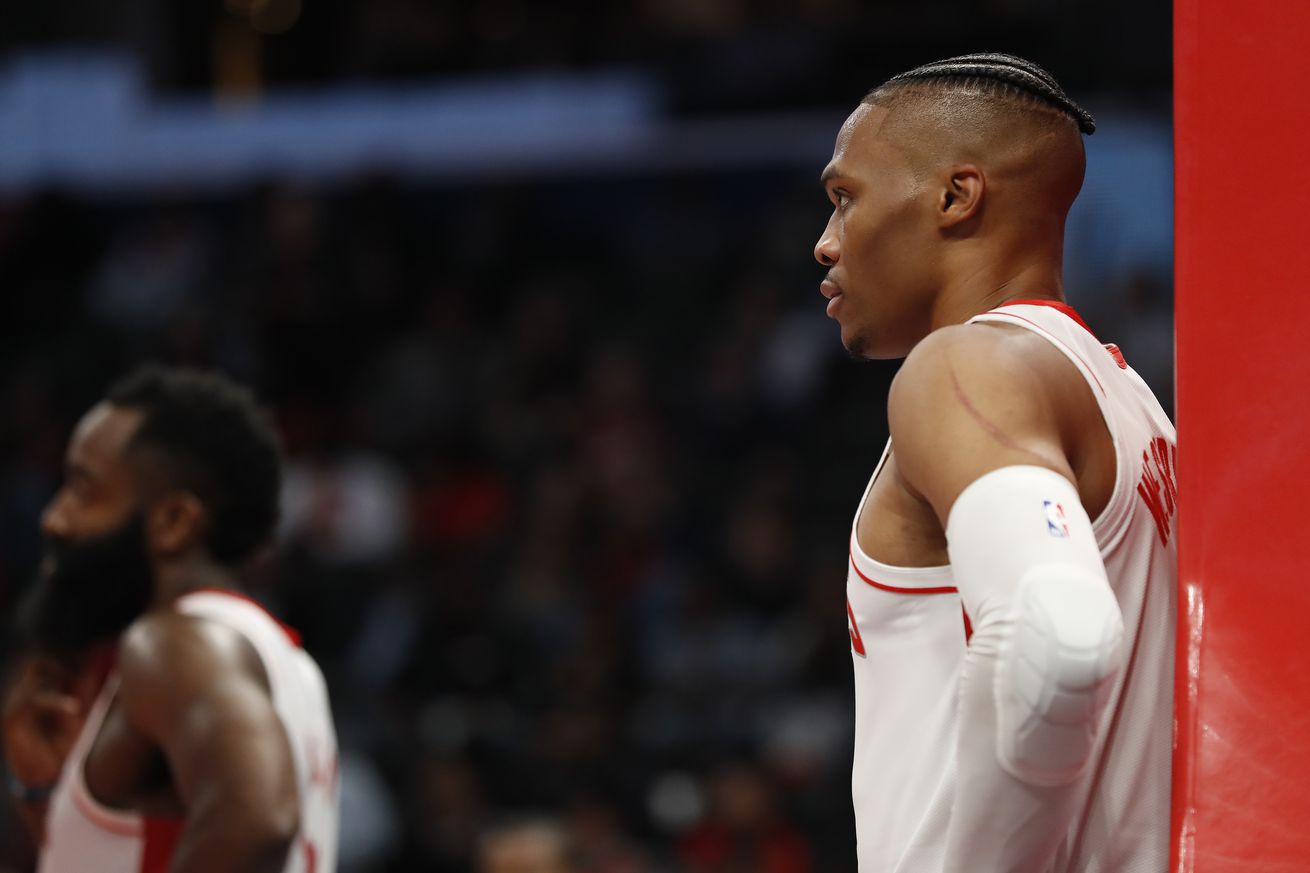 Through seven games, the Rockets have vastly underperformed on the defensive end. But what has caused these struggles?

Through the first seven games of the NBA season, the Houston Rockets’ defense has been, let’s just say, not good. The team currently ranks 28th in defensive rating, ahead of only the Golden State Warriors and the New Orleans Pelicans— two teams that have already seen several of their best players go down with injury.

For a team that considers themselves to be among the league’s elite that will be contending for a championship come playoff time, their current level of play on the defensive side of the ball is the furthest thing from acceptable.

This isn’t a team that should be defending this poorly, though. They have the talent to be a top half of the league unit, at minimum, but they’ve just failed to show it early in the season, for various reasons.

These reasons were put on full display when the team faced off against the Miami Heat on November 3. The Heat were the perfect team to take advantage of every single one of the Rocket’s defensive weaknesses that night. That was Houston’s rock bottom.

So today we’re going to use this game against Miami as a launching point to go over what exactly has gone wrong for the Rockets’ defense so far and what they can do to remedy these issues before it’s too late.

The (sorta) bright side: shooting

The Rockets are currently dead last in the NBA in opponent three-point percentage at 42.2%. This is ridiculously high and will almost certainly see some positive regression as the season goes on. It’s just not realistic for opponents to shoot that well against the Rockets all season.

But it is certainly possible that the team will remain the worst in the NBA at defending the three point line all season, even if the number improves. While some teams have had uncharacteristically great shooting nights against them, such as the Wizards when they scored 158 points, the team also hasn’t done themselves any favors when it comes to giving teams opportunities to take and make open threes.

They’ve allowed opponents to take 15.3 open threes per game (the closest defender being between 4-6 feet away) and 38.3% of those shots have gone in. Again, not good.

But wait, it gets even better (much, much worse).

They’ve also allowed opponents to take 16 wide-open threes per game (the closest defender being more than six feet away) and a blistering 49.1% of those shots have found the bottom of the hoop. Super not good.

Miami abused this tendency to give up open shots— and so will every competent team the Rockets face. Because it’s very, very easy when they play like this.

Here, the Heat run a simple off ball screen on the strong side while Jimmy Butler ran a side pick-and-roll with Bam Adebayo. This is an extremely basic, but effective, look that resulted in a wide-open three.

There are two things to blame for why this occurred. At first glance, it appears that James Harden falls asleep on the screen and fails to fight around it until it’s too late. While this does happen, it seems like Harden expected P.J. Tucker to switch the action and pick up the shooter on the other side of the screen while Harden sticks with the screener.

It’s hard to say which is correct since we don’t know exactly how Mike D’Antoni coaches his team to defend this look, but one of these two scenarios is definitely correct— and it doesn’t particularly matter which. Either way, there is clearly a disconnect between players on the court, which has been a recurring issue.

Here, Chris Clemons loses track of his man as he wraps around the arch, and at the last second notices and tells Tucker to switch. Tucker didn’t notice the wrap either and had no chance of getting there on time once Clemons finally verbalized the issue, resulting in yet another open three.

This lack of communication and continuity between players on defense isn’t just an issue when it comes to giving up careless threes. It’s an issue that has been ailing the entire defensive scheme this season.

Switching only works when you talk and pay attention

Look at this play and try to figure out what exactly went wrong:

The play resulted in Harden and Clint Capela looking so lost that it’s difficult to see what even caused such a gaff. It appears that Harden, who was currently defending the center, slid over to help on the drive, as he should. While Harden was doing that, Capela had his back to his man on the perimeter and didn’t even notice that he cut back door while he wasn’t looking. So when Capela saw Harden slide over on the drive, Capela rotated over to the center to try and defend the potential dump off. Harden then notices Capela is sliding over to defend his man and tries to sprint out to the shooter that he still thinks is on the perimeter, because he also didn’t see the cut. Capela has the same thought at the same time, leaving no one in the paint to defend the wide-open big man while both Rockets sprint out to defend no one.

See how much of a mouthful it was to try and explain just this one blown play? Now here’s another:

Here, Austin Rivers calls for a switch as he sees Eric Gordon’s man run towards him, assuming he is going to set some kind of screen. So Rivers picks up Gordon’s man, but Gordon doesn’t even think to switch since there was no contact, leaving Rivers’ man wide open driving down the lane, which resulted in a bucket at the rim as the remaining Rockets scramble to rotate and make up for Gordon’s mistake.

The problem here is similar to that of the first play. The Rockets switch everything on defense, even when they don’t necessarily need to. This is fine, if done well. But when there are these constant lapses in communication and awareness such as you see from Capela and Gordon in these plays, there’s simply no way to execute this scheme well.

At this rate, the team needs to either seriously lock in and actually pay attention on defense so these easy buckets don’t come left and right, or simplify things for their perimeter defenders and do less switching.

While the latter may be a quicker solution, the former is what needs to be done in the long run. For one, this system works when executed well, we’ve seen it in the past. They just need to try. Secondly, these mental lapses have been hurting the team even outside of their copious switches.

These next three plays occurred one after another in three straight possessions:

If these simple cuts are going to destroy the team’s perimeter defenders this easily then the team’s issues are even bigger than once thought. Players like Eric Gordon and James Harden have no excuse for the level of focus they’ve shown off ball.

Russell Westbrook has been a disaster

I’ve highlighted mistakes that have been made from just about every notable Rocket thus far, besides Russell Westbrook. It’s not that Russ was without his fair share of mishaps. In fact, it’s been the opposite. His defensive play has been so damaging, especially against the Heat, that he deserves his own section.

He’s shown the same bad habits off-ball as every other Rocket’s perimeter defender, but in even higher of a volume.

Here, Westbrook’s man beats him with a cut after a simple give and go. It’s like his feet were stuck in quicksand.

Here, Westbrook loses Jimmy Butler when he wraps around the three-point line, forcing P.J. Tucker to pick him up. Russ then defends the big man that Tucker was guarding and gives a pretty poor effort defending the pick and roll that followed.

It’s not just this lack of awareness that Westbrook shows that has hurt the defense. He also takes far too many gambles in search of steals.

Here are two examples of such gambles:

This isn’t just to pick on Westbrook as if he’s single-handedly responsible for the team’s half-court woes. He’s not. But the way he’s played recently isn’t an ingredient for success, especially when combined with the other lackluster performances on that end from guys like Eric Gordon and James Harden.

Regardless, the team’s defense has consistently performed better without Russell Westbrook so far this season.

The team’s starting lineup has been far and away their best defensive lineup, with a 101.4 defensive rating (61st percentile.) But just about every other lineup that includes Westbrook has been in the 130s or higher, with one exception at 114 and another at 121.

The Rockets haven’t been great defensively without Westbrook, but they’ve been a disaster with him.

Westbrook was especially bad in the half court against the Heat, just because the Heat took advantage of his weaknesses better than most teams have. While he hasn’t been quite the liability in that area all season like he was that game, there is one major area that Westbrook was exposed in against Miami that has also torpedo’d the teams’ defense all year. Transition.

Russell Westbrook simply refuses to get back in transition a vast majority of the time, and it has hurt the team tremendously.

The Rockets are currently 29th in the NBA when it comes to defending in transition. No matter what, they’re bad at this, but with Westbrook, they become the worst in the NBA by a large margin.

Westbrook’s effort in the half court comes and goes, at best. It is what it is. You can live with that if you have other attentive defenders to make up for him (spoiler alert: they haven’t had those recently.) But his effort in transition must improve if the team wants to have a decent defense at any point this season. Being in the bottom two at defending the easiest points an offense can generate isn’t going to work.

To bring everything back to the top, the Rockets currently have an atrocious defense— but they should be far from that. They are bound to improve slightly just by the reversal of their luck when it comes to the amount of shots their opponents have made. It’s highly unlikely they become the most unlucky defense of all time, but they also need to get better at not allowing so many wide-open three-point attempts.

Their current switch-everything defense scheme is failing, but only because of the lack of effort and awareness from their perimeter defenders, something they can easily fix if they want to.

And while players like Eric Gordon and James Harden are doing their fair share when it comes to tanking the team’s defense, Russell Westbrook has been the driving force in making the Rockets one of the league’s worst defenses, especially when it comes to how he has affected the team’s transition defense.

All of these issues can easily be reversed, making the Rockets the elite defensive team they once were and still strive to be. But they have to want to be as great as they say they do on that end.