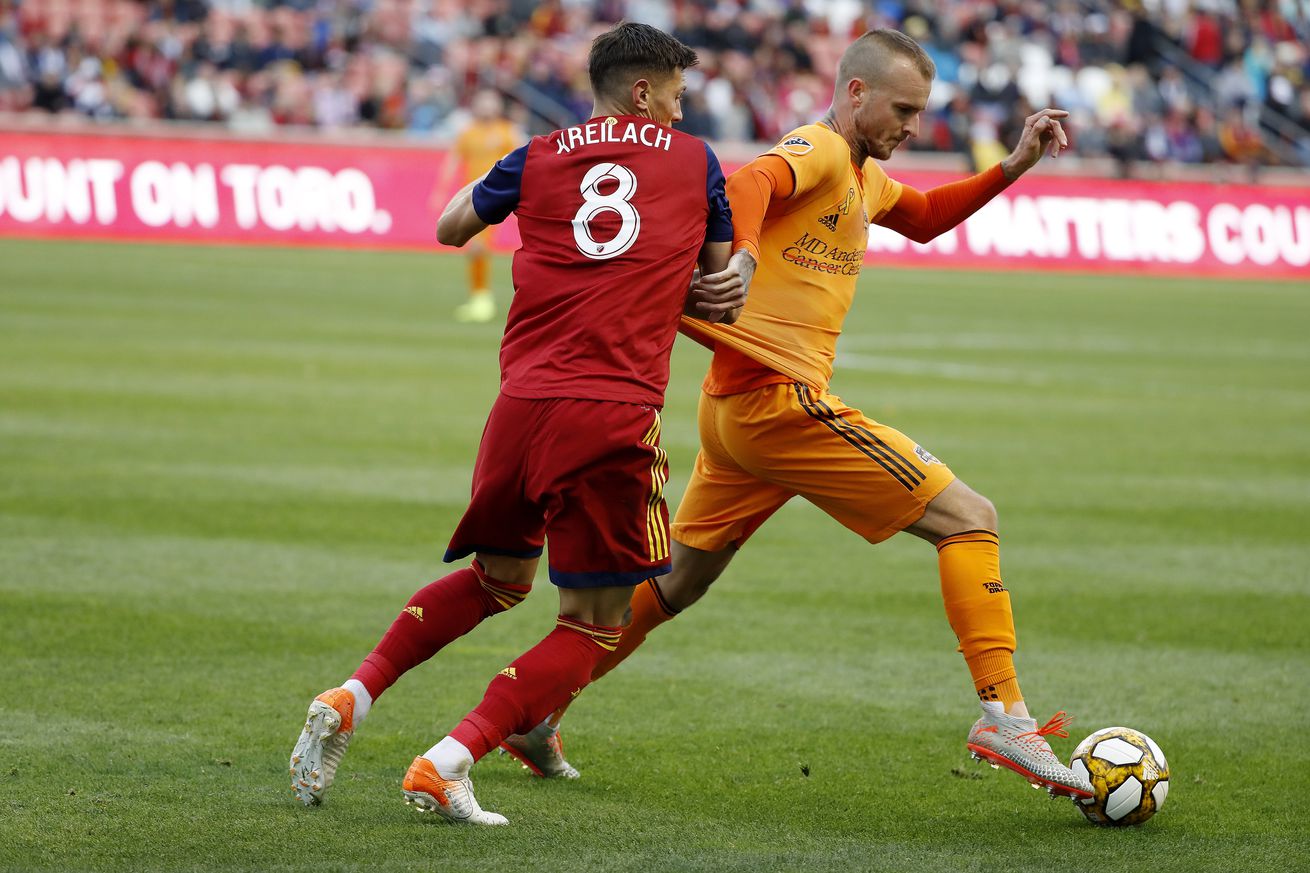 The tale of two halves form made its return this time under Davy Arnaud as the Dynamo fell 2-1 to Real Salt Lake.

Recently eliminated from playoff contention following their loss on the road against Los Angeles FC, the Houston Dynamo now looked to finish their final two games of the season on a positive note. Up first was Real Salt Lake at Rio Tinto Stadium in Sandy, UT where unfortunately they were unable to come away with points. Despite conceding an early goal, the Dynamo were easily the better team in the first half, but they were unable to replicate that form in the second where RSL pulled out a game winner.

Real Salt Lake got off to a dream start unfortunately for the Houston Dynamo. A poor give away by Darwin Cerén led to a counter attack by Corey Baird. Baird took the ball all the way to Tyler Deric and was able to get the home team up within the first minute of play. Everton Luiz made a run beside him which forced Kiki Struna to push over and Alejandro Fuenmayor was not able to cover Baird quickly enough to defend the shot.

After giving up the early goal, the Dynamo responded by upping their tempo and pressing higher which helped them build play up, but the passing to put players in on goal was not sharp enough to help Houston respond to the early goal.

The Dynamo thought they had their equalizer in the 23rd minute after a rare mistake by RSL goalkeeper Nick Rimando. After saving a shot by Alberth Elis he forced the ball low and back at the Honduran. The ball got caught under Elis’s foot so he couldn’t quickly get a shot off so he played it over to Mauro Manotas whose shot was blocked. Elis made a play on the ball, but it fell to Tommy McNamara who perfectly weighted a shot back post. Upon VAR review, Elis was ruled to be in an offside position so the home side kept their lead.

Tomás Martínez would get the Dynamo equalizer a few minutes later though. The Dynamo recovered a ball in the midfield following a poor giveaway by Alberth Elis who should have gone 1v1 on goal rather than playing a ball wide to DaMarcus Beasley. Martínez played Elis through on goal who this time went at Rimando and forced a close distance save. Martínez was first to the ball and got around his defender and was able to beat Rimando with his weaker foot from close range.

After Tomás’s goal, the Dynamo confidence seemed to be surging with the team pushing for more goals and coming very close while RSL looked to be shrinking with the crowd taken out of the game. First Tomás played a great over the top pass to Elis who slotted it passed Rimando, but he would be ruled offsides. In the 38th minute Adam Lundqvist ripped one which Rimando saved, but it then fell to Tommy McNamara whose shot struck the side crossbar and then the leg of a RSL defender resulting in a corner kick.

Sooooo close to a second pic.twitter.com/FvHTBvT5FN

The two sides would go into their locker rooms locked at a goal apiece, but the Dynamo really deserved more given the chances they generated.

For most of the second half the game ebbed and flowed in both directions with neither side creating anything too threatening. In the 72nd minute Albert Rusnák let a shot fly from distance which Tyler Deric was able to save, but he spilled it in front of goal. Fortunately, Deric was able to get to it before an RSL player.

After that shot, RSL began to show a little more urgency as they pushed the ball higher up the field with more numbers. Two minutes later RSL retook the lead with substitute Sabastián Saucedo laying the ball off to Jefferson Savarino who perfectly placed a ball into the far post net.

There were cries for a penalty by the home fans with Everton Luiz going down in the penalty box after there was some contact with Alejandro Fuenmayor. However, the contact was far too light to warrant going down and the referee decided on calling a goal kick.

After 90 minutes plus stoppage time the Dynamo would end up losing 2-1 at Rio Tinto. It was a fantastic first half despite an early goal, but they didn’t convert more goals that they arguably should have. An uneven second half by both sides for much of the period saw RSL turn up the heat against tired legs which helped get them a game winner.

Next up for the Houston Dynamo is final game of the season and it will be at BBVA Stadium Sunday, October 6th at 3:00 PM CT against the LA Galaxy.