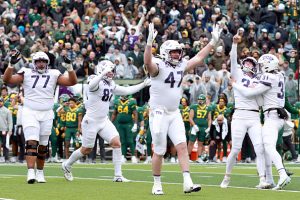 This is it. One last full week of Big 12 action. Two teams are competing for one last spot to challenge TCU for the Big 12 conference championship. Last week’s action was solid overall, as we went 3-2 straight up, 2-3 ATS, and 4-1 on totals. Let’s make sure we stuff our bank accounts with these Big 12 Week 13 winners. Just like we will stuff our faces with turkey this week. As always, lines are provided by BetMGM.

Every time Texas gives us a week of growth, they seemingly revert back the next week. However, this week should be different. Texas is coming off a throttling of Kansas while Baylor is kicking itself for letting TCU escape Waco unscathed. The Longhorns still have a possibility of getting to the Big 12 title game. Steve Sarkisian’s team should be sharp against Dave Aranda’s Baylor Bears, who likely will be on a little bit of a letdown. In what will presumably be running back Bijan Robinson’s last game at DKR Texas Memorial Stadium, he leads a big offense day for the Horns.

This one of the Big 12 week 13 winners stinks. West Virginia very well could be in “One, Two, Three…Cancun!” mode. No bowl game to play for and likely a head coach in Neal Brown coaching his last game for the Mountaineers. But on the flip side, Oklahoma State has been in nothing short of a free fall since climbing to number nine in the polls. Injuries have taken their toll, but they have had some complete no-show performances in the last month. Vegas’ line suggests this would be a 37-28 game in favor of the Pokes. Oklahoma State hasn’t scored more than 20 points in a month. Even in losses, West Virginia has been able to score a little bit. However, Oklahoma State will want to send its seniors out on a good note and do enough to cover the spread.

For teams located at the exact opposite ends of the Big 12 standings, they sure do share a love of one-score games. However, TCU has been on the right side of those all year. While Iowa State has been suffering one-score losses all year. With one game left, abandoning Sonny Dykes and the Horned Frogs seems foolish. But against one of the nation’s best defenses, covering 10 points seems like a tall task. Iowa State will hang around in this one. But TCU, as it has done all season, will make enough plays in the fourth quarter to wrap up an undefeated regular season.

First-year head coaches Brent Venables and Joey McGuire both would love to end the regular season on a high note. Both teams enter this season finale with the same record. One program, Texas Tech, views a 6-5 mark in year one for McGuire as a success. Meanwhile, in Norman, Venables has locked the Sooners into their worst regular season record since 2009. When Oklahoma is cooking, they look like Oklahoma many Big 12 fans have been accustomed to seeing for the last two decades. But, the problem has been they are wildly inconsistent not just week-to-week, but quarter-to-quarter.

Last week’s win was just another example of that as they did not score a point in the last three-quarters of the game and still won. Meanwhile, Texas Tech is riding high with one last home game to send the seniors out with a bang. Expect a good old fashion shootout in Lubbock on Saturday night. Texas Tech just happens to have the ball last to orchestrate a game-winning drive. With this upset by the Red Raiders, Oklahoma will suffer its worst regular season record since 1998.

What good are these Big 12 week 12 winners without a little transparency? Admittedly, I want to see Kansas win this game. They have been back-sliding since an electric start to the season when the Jayhawks were 5-0. It would seem somewhat poetic for them to break their 13-game losing streak to Kansas State. A season filled with so much growth and achievement almost deserves that type of ending to the regular season. But the fact is, Kansas State is still a much better team than Lance Leipold’s squad. The Wildcats have won two games in a row by a score of 79-34. Not to mention, a win sends Chris Klieman and his Wildcats to Arlington with a chance to avenge their 38-28 loss to TCU. Even in the most anticipated Sunflower Showdown in over a decade, the Wildcats win by two touchdowns.